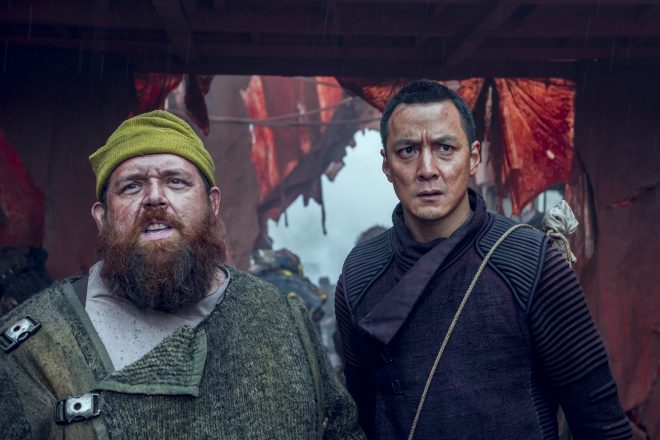 Written by LaToya Morgan and directed by Paco Cabezas, this episode brought cute kids in danger and ghosts.

Bajie (Nick Frost) and Sunny (Danny Wu) make it to Nos’s (Marc Rissman) domain to bargain getting into the Badlands through smuggle routes.  Nos knows Bajie from way back.  Sunny bargains for use of Nos’s routes by giving him Silver Moon’s blade.  Nos takes the deal. During dinner, Nos gets creepy with knowing when a girl becomes old enough to become a prostitute.  He also delivers news about the attack at the conclave and how Quinn is alive.  Sunny is wondering how that is when he clipped him.  Nos mentions Quinn must have a heck of a healer, getting Sunny to start thinking.

Bajie hooks up with one of the girls Ravel (Roxanne Sternberg) while Sunny declines Portia’s (Farzana Dua Elahe) services.  She worries for her daughter Amelia (Amara Joyce), who is of age to become a doll.  Portia wants Sunny to kill Nos but he refuses.  The next day Nos offers a car for transportation.  He also got wind of the plot through Ravel and cut Portia’s face as punishment.  He wants to start Amelia as a doll now that her mother is worthless.  Sunny isn’t having it so he fights for both of them with Bajie coming in with the save for Amelia.  They get away with Moon’s sword, Portia (stabbed, bleeding out, but alive for now), and Amelia.

MK (Aramis Knight) makes his move to run away after a practice session.  Ava (Eve Connolly) seems hesitant about sounding the alarm.  He comes across a tree full of hanged boys. MK brings one down and steals his clothes. With different clothes MK walks off to unknown pastures.

The surviving barons have gone into hiding. Jade (Sarah Bolger) wants revenge for the death of Ryder (Oliver Stark).  Clipper Merrick (Allan Galdea) performs the ceremony for Jade, making her Baron as Ryder’s only successor.  Her first vow is making Quinn (Martin Csokas) pay!  Good luck with that.

Quinn is on his way back to his lair when he sees Ryder’s ghost.  He sees him again back at the camp as he is wiping his hands of Ryder’s blood.  Ryder talks trash but makes a few good points which include Veil (Madeleine Mantock) lying about Quinn’s prognosis. Ghost Ryder suggests threatening baby Henry to get to the truth.  Veil is questioned by clipper Declan (Karl Shields) about Edgar’s death.  He knows she lies about Edgar forcing himself on her because he preferred men.  He also found the x-rays revealing Quinn’s tumor.  The clipper lets her go for right now so she can start healing Quinn for real.

When Veil gets back to her room Henry is missing.  She goes to see Quinn and finds him with Henry holding a knife. With Ghost Ryder coaching, Quinn asks about the tumor. Veil denies that it’s back.  She manages to get Quinn to drop the knife by kissing him.

Back at the sanctuary, Tilda (Ally Ioannides) apologizes for not following orders. The Widow (Emily Beecham) appreciates Tilda following her instincts as she may not have survived without her regent’s timely arrival.  She has a chat with Waldo (Stephen Lang) since the conclave was a disaster.  The other baron’s focus will be on taking down Quinn so they can take advantage by killing him themselves.  Waldo thinks if she kills Quinn, that could garner favor with the barons.  The Widow doesn’t want to gravel considering their treatment of her but she still considers Waldo’s advice.  The Widow later stares at a map of the territories.  Her decision is to join forces with Quinn since trying to work with the other Barons didn’t go so well.  The Widow tasks Waldo to find him before the other barons do.

Lydia (Orla Brady)  is informed by Jade of her son’s death and her husband’s resurrection. She asks to be alone so she can mourn. Later Lydia tells Jade where Quinn has a hidden bunker.  She wants to kill Quinn herself.  Merrick, Lydia, and a clipper force find the hideaway.  Lydia wants Quinn brought out so she can finish the job.  Some of the clippers go in and a bomb goes off.  Lydia is knocked out from the blast.  Quinn was busy getting high but got somber when the ground shook.  He hurries over to Veil and Henry, but find them gone.  Veil found an opening and is now running in the woods.  Whew!

I’m glad we did not see much of MK but I’m disappointed that we didn’t see the Master this episode.  MK is being a petulant child.  I feel like he is just running away from his problems instead accepting help from the Master.  Yes, seeing your friend get the powers taken away put a damper on things but that’s what he risked running away.  Now he has potentially brought Ava into the middle, which is not fair to her.  She can make her own decisions but she was content at the monastery until he showed up.   A part of me wants him to get caught.  That way if the power is taken away from him at least he won’t have to worry about killing someone by trance again.  It looks like his story will collide with Sunny’s according to next week’s episode preview.

I appreciate how the show kept Oliver Stark on the show briefly since he was killed in last week’s episode.  There’s nothing like haunting the father that murdered you.  Why couldn’t Ryder have backed that up with being able to fight while alive? I feel like Stark for his next role needs to be redeemed by playing a character that can fight.  Here is hoping that for the time being #GhostRyder keeps visiting dear old dad.

I am so happy that Veil finally escaped! Question, did she go through the front door though? Wouldn’t the smoke effect the baby? Did the lock or bars loosen enough for her to escape that way? Inquiring minds want to know! If the Widow teams up with Quinn, who can Veil go to for hiding until Sunny gets there? Jade? Could the Widow hide her anyway? When she kissed Quinn I was like:

Serious gag. It didn’t take long for Quinn to go back to his old habits with that opium.  That man has been losing it since the beginning of the series.  He should’ve known that getting rid of his tumor was not going to be an easy fix.  Also, I knew that keeping those x-rays was going to bite Veil in the butt. I’m surprised that it was Declan and not Quinn that found them. I think part of it was finding Edgar dead.  Something tells me that he was good friends with the cook.  He also could have been a lover. Either way, Veil was screwed.  Now she is running with only the clothes on her back.  Hopefully she finds some help soon.

Did anyone even think to check for booby traps?  Lydia should’ve known better.  Now she is captured under Quinn’s mercy.  I want her to live darn it! Hopefully that conversation keeps Lydia alive.

Jade needs to learn how to fight and quick. Otherwise she is not going to last as a Baron.  Every other Baron knows how to fight. At least Ryder could do something, even though it was very little. Jade can’t even fake it.  She can probably play that political game just fine but she can’t back it up with some fighting skills.  Miss Ambition may have bitten off more than she can chew.

I’m hesitant about the Widow working with Quinn.  I see why she would do it though.  Quinn did almost beat her back in Season 1 and their lands border each other on the East side.  That would be one border she would not have to worry about until the other barons are taken care of.  I’m not surprised that she would not be upset with Tilda for showing up since her prompt arrival did save her.  How long will that last though? There may come a point where Tilda and “mother” will clash again.

I was initially mad at Ms Ravel for spilling the beans on Portia’s proposition.  But then I started thinking that Nos must have suspected how tempting any of his dolls would be to ask Sunny, a clipper to kill him.  He may not have believed Ravel if she told him nothing was proposed.  She would’ve been punished along with Portia at that point for no reason.  If that’s the case then there was a no-win situation.  I’m not expecting Portia to last long with her injuries so Amelia may soon be an orphan.  Sunny could take her under his wing but having a kid underfoot would be problematic.  We will see how long that lasts.

I’m looking forward to next week’s episode, as there is the meeting between Quinn and the Widow. What did you like about the episode and this season so far? Sound off below in the comments!

Reinvented “Thunderbirds” Probably A Go For Children Only