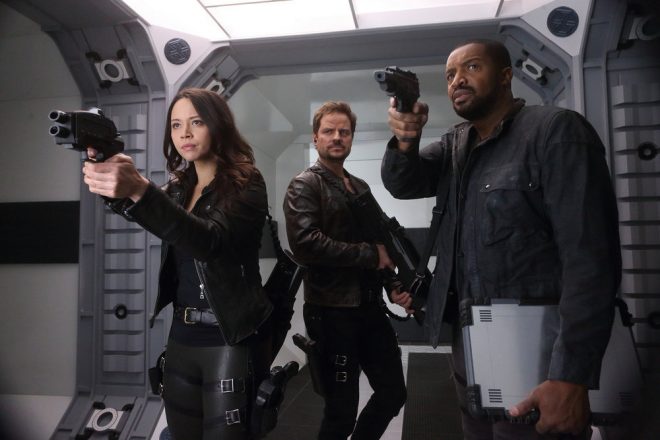 We finally find out how our Raza Crew managed to escape Eos-7 as it blew up in the 2nd season finale of Dark Matter! Not only that we got a double dose of a premiere with “Being Better is So Much Harder” and “It Doesn’t Have to Be Like This.”  As always I love how the titles were slipped into each episode.

“Being Better is So Much Harder”

Five (Jodelle Ferland) was the first to confirm she was alive to Android (Zoie Palmer).  Commander Truffault (Tori Higginson) from Mikkei escaped with Five in a pod before Eos-7 blew and was picked up by another corporation.  Six (Roger Cross) and Two (Melissa O’Neil) make it to the Marauder but are caught in the blast.  With the ship offline, they are stuck.  Running out of oxygen, Six gets the comms back up so the Raza knows to pick them up.

Lieutenant Anders (Jeff Teravainen) took Three (Anthony Lemke) to an abandoned warehouse on a nearby planet.  After helping to defeat a rogue security drone, Anders decides instead of turning Three over to the GA, to have the Raza pick him up.   King Ryo Ishida (Alex Mallari Jr) busts mentor Teku (Andrew Moodie), out of prison, assigning him the role as the King’s advisor, despite the protests of his guard Misaki (Ellen Wong).

I was hoping that the crew would be back together by episode’s end and I was not disappointed.  The first hour explored regrets while also giving us some space action.  Six and Two had to have that conversation about Four/Ryo.  They were the only ones that had an idea that he wanted to use the blink drive for his own purposes.  Two was on the right track on why Ryo would still kill Nyx when knocking her out was a better solution.  I’ve always enjoyed scenes between Cross and O’Neil!  Their conversation hit deep levels about guilt and trying to make up for their pasts.  However, it felt very cliché for the oxygen to go out. Then, just when all was lost the Raza picked them up after dealing with the Ferrous Corp ship.

Seeing Nyx (Melanie Liburd) again was a very pleasant surprise!  I thought that Nyx was a good addition to the Raza crew and it was a shame that she died at Misaki’s hand.  I’m glad that as a fan there was closure, even if Nyx was a figment of Two’s imagination.  The kiss, unexpected was still fine with me.  A little part of me wished she smacked Two to snap her out of her guilt as a throwback to their fight last season but the conversation worked too.  If Nyx had not had a relationship with Four I would not have minded her hooking up with Two.

Every time I see Commander Truffault she does something that makes me love her more! The way that she worked together with Android and Five to defeat a Ferrous Corp ship was great! Five handling Three’s gun Bubba had me smiling!   I loved the advice that Truffault gave Two about moving forward as a leader serving the best interest of those you serve, even if the method is questionable.  Truffault reps the Mikkei Corp hard, but I think if the company ever screwed her she could be a nice ally for the Raza Crew.   For the time being though the two are frenemies, which is just fine because of the dynamic she has with Two.

Teku, Ryo’s new advisor, is someone that is loyal to him, not the throne.  Misaki is threatened because he rebelled against the court when Ryo was accused of killing his father.  Ryo is going to need a moral compass and it appears that Teku is it.  While both Teku and Misaki are both loyal to Ryo, their methods of advising will be vastly different because Misaki is more concerned with the throne than Ishida himself.

Teravainen had great chemistry with Lemke in this episode.  It was hilarious seeing that awkward moment between the two when Three was on top of the GA agent while attempting to keep still from the droid detecting them.  There was disappointment though when he initially wanted to turn Three in.  I guess the fact that Six helped them escape was not a clue that the Raza crew wasn’t all bad.  Three is right though that the Corporations will go after the GA to get rid of law and order so there is no accountability.  After this episode, I think Anders may become a member of the Raza crew in the near future or at the very least, help them out of a jam.

Speaking of Anders, he mentioned that he was best man.  To what? Was Kal married?

The end of this episode was also a shocker! So, is Three’s girl Sarah alive or what? Why is Five indicating who she is through Three’s memory?

Five uses Ryo’s memories to figure out where he took the blink drive.  He has a lab in a good hiding place in the middle of the Lanker Nebula. The Raza Crew go there to steal the drive.  Ryo sends his clone to assess the situation when Two, Six, and Three bust in with the Marauder.  Though warned, Ryo orders the scientists to use the drive to transport the station to Zairon.

Something goes wrong though because they wind up in a pocket of space.  The bubble closes in on them, destroying parts of the station.  The king is willing to sacrifice the other scientists in the station to prevent the Raza crew to getting to the drive.  Two and Three kill Ryo’s clone but are unable to save any of the scientists, especially the ones guarding the card.  Three, Two and Six get the blink drive away from one of the scientists. The Marauder escapes before the pocket eats them.  Shoutout to Jean Moon who played Dr. Hajek for the cameo.  I recognized her from the Expanse and other shows!

Meanwhile Five initially wants to go to Zairon when the station disappears, but Android advises they stay there.  The duo discovers what potentially happened when they see traces of the station.  Android does some research and sends frequent radar signals, which the Marauder picks up.  If it wasn’t for Android, no telling if the blink drive would have taken the Marauder back near the Raza ship.

On Zairon, Misaki warns Teku by telling him about the time she killed a guy who bullied her as a kid.  Yep, NO body was found.  Android tells Ryo Nyx is dead. Upset, he confronts Misaki. Instead of denying it she reasons that it was for the best as Nyx was a distraction.

Five’s brain overloads with everyone’s memories.  She collapsed twice during the station crisis.  She flashes back to being mentored by a fix-it shop owner when she was a kid on the streets.  He tells her that she has a sister, but because she decides to go with a procedure to store her memories, she doesn’t find out much else.  Everyone was concerned because of the chance that she would not keep her current memories but thank goodness the procedure went well!

Praise be Ryo now knows about Nyx instead of later in the season! I’m not surprised that Misaki is still alive.  Teku is like the angel on Ryo’s shoulder while Misaki is the devil.  Who will win? The head Royal guard’s story about the bully is a perfect example of her tenacity and determination. Parts of me admired her for it.  I have to give it to Ms. Misaki, Teku knows where he stands with her.  He better watch his back!

Ryo showed strategic mercy with Teku but seemed super ruthless when it came to protecting the blink drive. Innocent scientists had to die instead of working with Two and Three.  Again, his struggle with ruling with compassion vs strength seems to be a theme for this season.  A layered villain for sure!  Will Ryo survive his reign?

It was difficult to watch Two and Three confront Ryo at the station because of their history.  They didn’t even hesitate to shoot him once there was no compromise about saving the scientists.  Can there ever be forgiveness between those that were once friends? Looking back on their conversation earlier with Six, I believe he is right.  Killing Ryo won’t bring Nyx back.  Not only that but killing Zairon’s king will bring an entire country after them. Hopefully they realize that Ryo had no intention of killing them to steal the drive.

From Ryo’s regret for shutting Android down, I think they got along fine before the memory wipe.  However, Android believed up until she talked to him that he killed Nyx. Will she forgive him at all, plead his case to the others? We will see.

Five’s flashbacks have me intrigued.  We don’t know too much about her except for the snippets we learned over two seasons.  I’m looking forward to Five searching for and finding her sister. If so who? The scene in the earlier episode where she wanted to eat on her own after everyone is back on the Raza gave me a sense of foreshadowing.  Could Five pull away once she finds her sibling? Is she heading for more heartbreak? Will she depend on her Raza family now more than ever? We will have to find out!

I hope to see more flashbacks from all of the characters as the season progresses, especially Five.  The mentor was a cool guy after all.  It makes me wonder what would’ve happened if she stayed.  When the others learned of Five’s predicament, I thought it was adorable how much Three showed his concern.  It made me go:

What makes this show good is when we learn more about the main characters it adds a layer whether good or bad.  This show is one of three that I will enjoy on my Friday nights this summer! The Raza crew’s journey has so many twists and turns that I can’t wait to see what creator Joseph Mallozzi has in store for us!

What did you think of the premiere episodes? Sound off below in the comments!