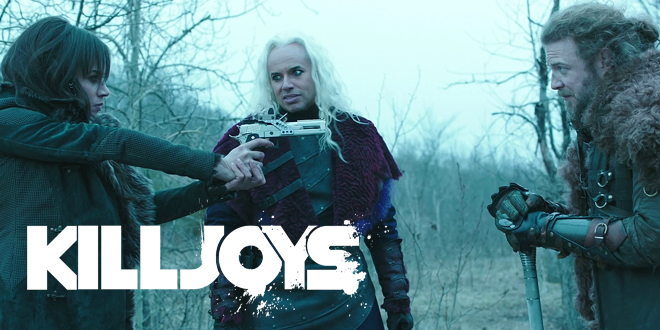 In the left corner, we have Johnny “Old Nerd” Jaqobis and on the right, “New Nerd” Zeph. Both are trying to sort out the remnant  they picked up in the last ep. And both have their own ideas on how to do it (big surprise). It’s a nerd off! Except Zeph has a point about not cracking open something that’s quite possibly housing a plague. Sorry Johnny. 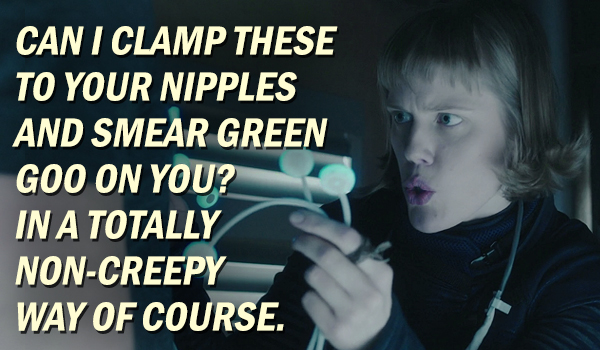 …but D’av is only there to drag Johnny out to a special event: Johnny’s promotion party! That’s right biatches… Johnny be Level V now. In fact Turin tells him he would’ve promoted him sooner had Dutch not blocked his promotions in the past. Whaaaa??

The revelry hits the skids when some out of town Killjoys show up and serve Johnny a black warrant. Thanks for that, Banyon! The warrant is for killing Delle Seyah Kendry but Turin, Dutch and D’avin all figure something hinky is going on. The Nine didn’t give two flips about Delle Seyah for all the time Johnny was gone. So why now? Besides Johnny wouldn’t be so stupid as to kill a Niner right?? 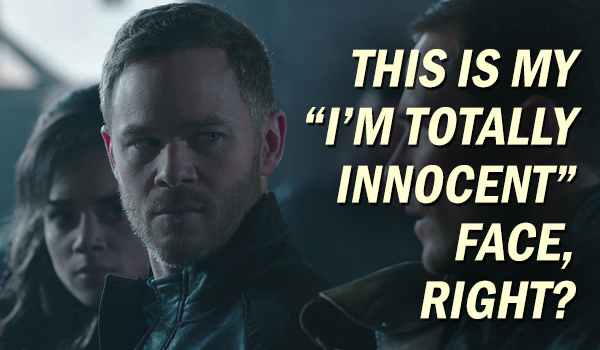 Except Johnny can’t deny it and all hells breaks loose in the Royale. Then D’avin points out the obvious: since it’s a black warrant, Killjoys will all keep coming until they get him. As D’av’s prediction comes true and more show up outside, Dutch and Pree escape with Johnny while D’av provides cover. They make it to Lucy but D’avin and Turin are on their own. There are too many Killjoys chasing Lucy for them to double back. Just then, D’av makes a surprising discovery. The out-of-town Killjoys had set their guns to stun, not kill. That means the warrant calls for Johnny to be taken alive.

On the creepy Hullen ship, Aneela continues giving Seyah Kendry a tour of all things Hullen. The next stop: green goo that acts as a a storehouse of all information Hullen-y so they can know and remember all. 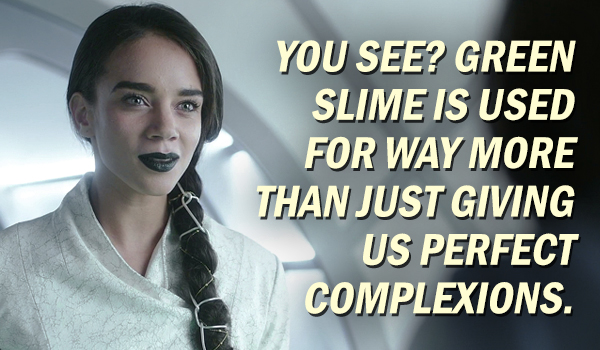 The rapid fire of images is overwhelming at first for the poor little evil puppy. She’s unsure of what she’s seen but then Aneela informs her: what she saw was the beginning. The beginning of what? Something evil, probably. 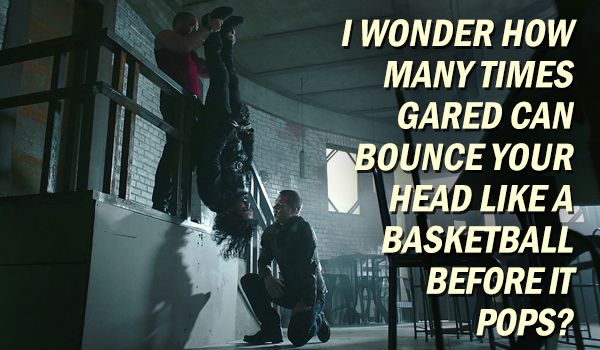 Out of town Killjoy finally relents. He tells them Johnny is to be put into cryo and be picked up to be taken somewhere far, far away.

Meanwhile back on Lucy, Johnny’s upset at Dutch, probs for her blocking his promotions. And Dutch points out that hey, perhaps we should talk about the whole murdering Seyah Kendry thing instead, yeah? Because Niners have allies and there’s no way they’d be okay with one of their own getting knocked off. Johnny points out that that’s why he left and shouldn’t have returned since now they will turn their anger on to Dutch and D’avin.

Pree arrives in the cockpit and suggests instead of hiding out in their current locale…a not-so-safe astroid belt…they go to Ohron which is the home base of the Ferran, aka badass outlaw mercenaries who Pree ran with back in the day. That’s significantly safer, obvs.

Pree, now with flowing blonde locks, initiates contact with the Ferran by telling them he used to be known as Varrick and is seeking sanctuary. After a brief reunion with the Ferran leader Lachlan, which entailed both kissing and shooting (por supuesto), Lachlan brings our three heroes to the Ferran camp. Pree/Verrick has to die for abandoning his role as leader of the Ferran and in exchange Lachlan will provide Johnny sanctuary. 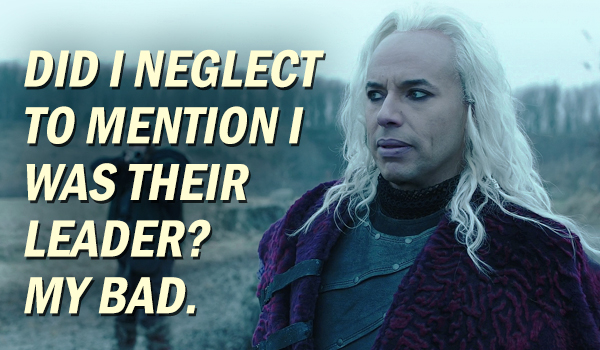 But there’s more goin’ on and Dutch goes to Lachlan to get Pree off the hook and hopefully recruit the Ferran into a righteous war to save humanity from the Hullen. She must have left her kid gloves on Lucy because she gets a little in your face with Lachlan by pointing out that for a man leading people to fight honorable causes his motivations re: Pree aren’t at all honorable and that if Lachlan kills Pree it would be because he wants to sooth his ego and broken heart and not because he has to do the right thing. She also adds she needs Pree in the upcoming war versus the Hullen.

Lachlan was totally okay with being called out (no he wasn’t) and came up with a perfect plan: a fight between two champions, where one fighting for Pree’s life (Dutch) and the other fighting to determine whether or not the Farren engage the Hullen. And their choice is? You guessed it: Johnny.

Each champion goes through three trials: strength of body, mind and spirit. Dutch wins the first (though Johnny’s hard pressed to give that to her. Johnny wins the second by assembling his gun while blindfolded faster and shooting the mark on the ceiling a half second before Dutch. 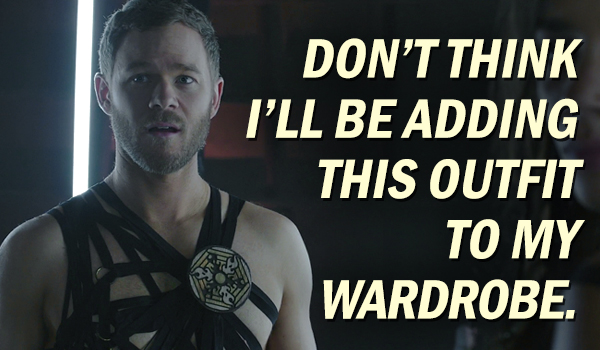 Back at the RAC, Turin hits all kinds of proverbial brick walls. At least gets Banyon to provide the evidence against Johnny, which is a brief clip of him shooting Seyah Kendry. But it cuts out right afterwards. Turin sends it to D’avin and, thanks to Gared and his knowledge of Pree’s alleyway cams, he’s able to find another more fleshed out version of the video which shows her getting up and walking away, aka very much not dead. Time for D’avin to show his evidence to Banyon! Cuz that will go well. 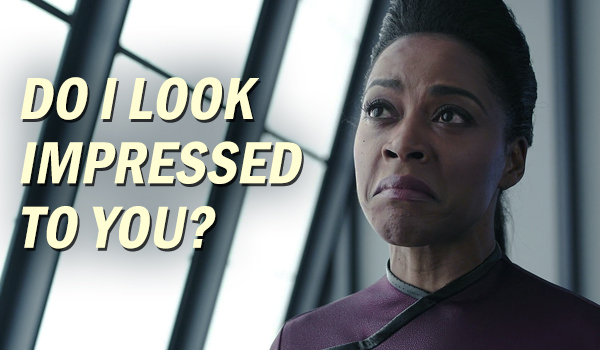 D’avin brings Zeph up to speed about Seyah Kendry’s revenge quest against Johnny and asks for her help to get into newly Hullen-ed Kendry’s mind using the green goo, just as he had previously with Khlyen. Their first attempt doesn’t go so great (don’t worry D’av…those brain cells will come back eventually).

Back on Ohron, Johnny and Dutch are about to start the third trial. They need to free themselves from a cuff chained to the floor. The twist? Lochlan gives them both a dose of truth jakk so all their deepest secrets come forth. 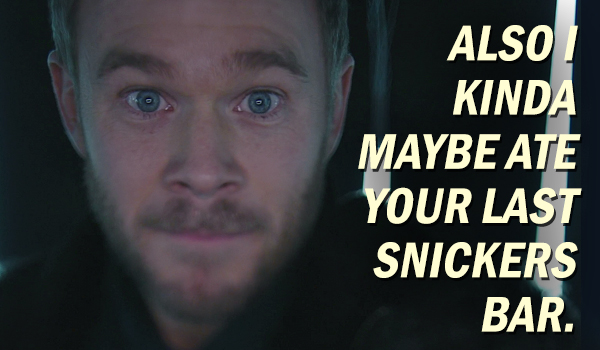 They reveal how they think of each other: Why Dutch blocked his promotions (to protect him), Dutch’s true motivations for this war and how they’re seeded in her need to prove herself to be better than Aneela. Also that Johnny thinks this war is a losing cause.

They’re no closer to freeing themselves from their cuffs when smoke floods the room and everyone drops to the ground as a masked intruder drags Dutch and Johnny out of there.

They wake up tied to chairs and trapped in a drop pod and quickly smooth over rough edges with each other. I think the truth jakk prompts you to reveal underlying truths but those don’t always tell the whole story. Does Johnny think going against the Hullen is a losing battle? Sure, but he also believes Dutch is the only chance they have. Dutch didn’t really want Johnny to stay gone, she just wanted him safe.

Pree and the Farren also are awake now. Lachlan’s ready to wash his hands of the now missing Dutch and Johnny but Pree goes on a tear, his wild blonde locks whooshing as he gets Lachlan in a head lock and forces Lachlan to deal with hard truths. Pree left because he knew Lachlan was willing to die for him and he didn’t want that. He also left for Lachlan and for the cause because he knew Lachlan was born to lead. The only way for that to happen was if everyone believed Pree was dead. They kiss and make up (and do a whole lot more off screen), make a deal for the Farren to engage the Hullen and go to save Dutch and Johnny except Dutch beats them to the punch and frees herself before they get there, thanks to nerve gas implants in her mouth.

Back on Lucy, Zeph has a new idea for D’av to tap his inner Hullen link and that’s to drink some weird hallucinogenic concoction. It works and D’avin finds himself on the Hullen ship looking at the not so dead Delle Seyah Kendry. The good news is he overhears Gander tell Kendry he got the commander to drop the warrant on Johnny. The bad news? Aneela can see and hear D’avin, probs due to their shared connection with Khlyen. She warns him she’s coming after Dutch.

Zeph in the meantime is playing around with the green goop and Khlyen’s blood because of course she does and then drops a mixture of the two on top of the remnant causing it to open. 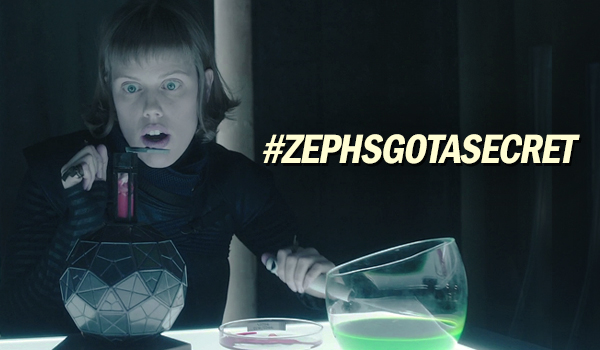 D’avin reports back to Dutch and Johnny about what he saw, and who he saw. They now know for certain: Delle Seyah Kendry is alive and is Hullen. Johnny’s ready for round two but Dutch tosses the gauntlet: it’s time to go all in and take back the RAC. 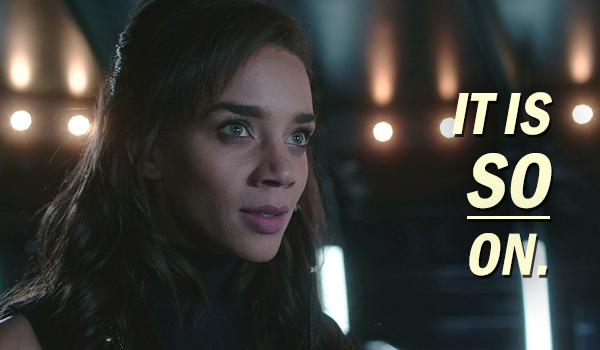 The Lion, The Witch & The Warlord hit a lot of important emotional beats. I’m glad Dutch is starting to see Johnny as more of an equal. Not that she viewed him as less before. In fact, her problem has been the opposite. Dutch has seen Johnny as some sort of pure essence keeping her from going full Khlyen on everyone. That’s not fair to Johnny nor is it fair to her because in the end, the one person who can save Dutch from herself is Dutch herself.  Meanwhile I enjoyed getting to learn more of Pree’s backstory. It gave vital insight into what makes him tick and shows why he’s made many of the decisions he’s made. I love that he trusted Dutch and that she didn’t let him down and that he returned the favor by getting the Farren on board with Dutch’s plans.

I give The Lion, The Witch & The Warlord 9 spikey dreadnoughts out of a possible 10.