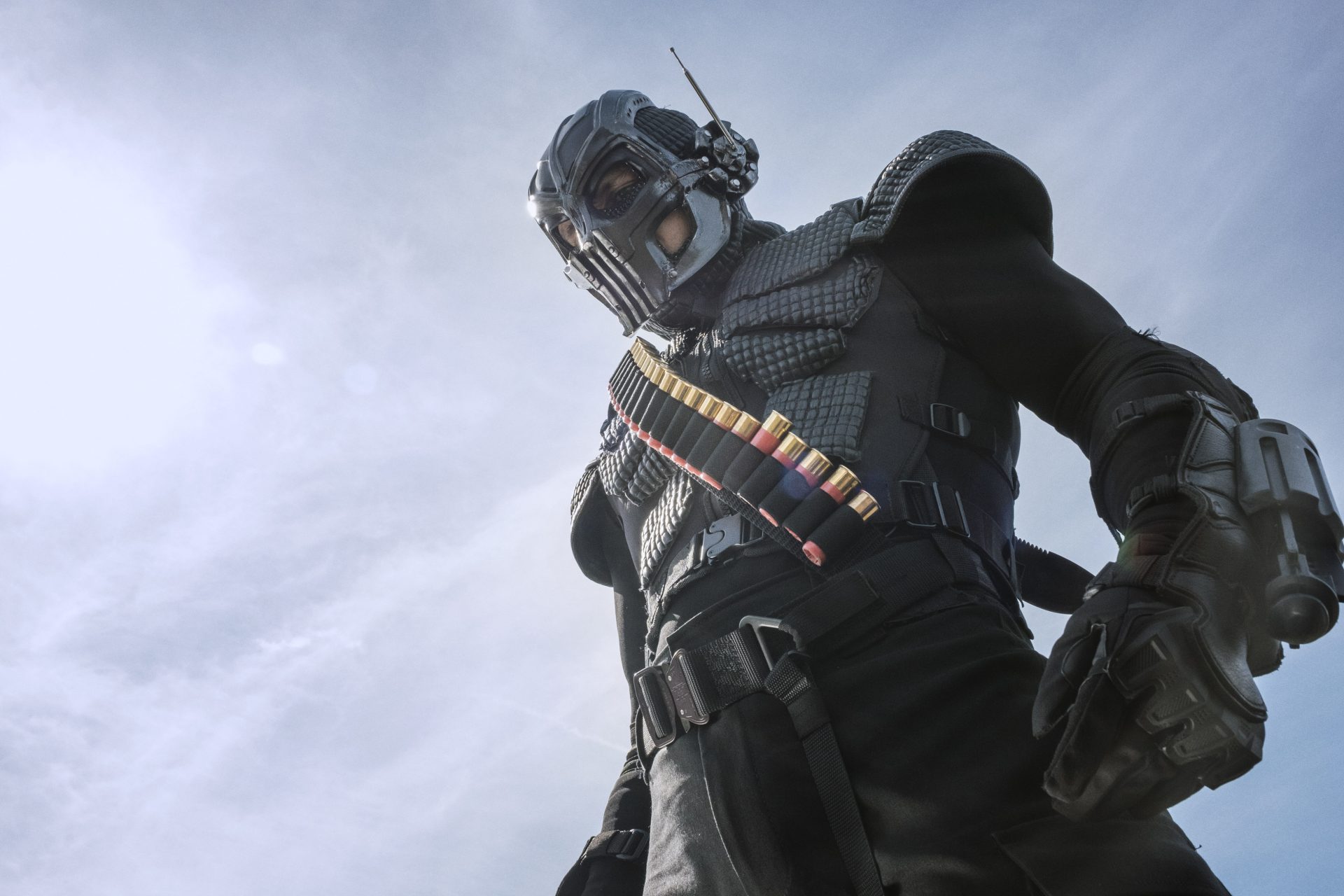 Today’s excerpts highlight one villain and one “hero.” Fans will recognize Michael Cerveris from his many television roles, including the kind Observer, September, on “Fringe”; Marvin Frey on “Treme”; James Castro on “The Good Wife”; and Ian Ware on “Fame.” As played by Cerveris, “Tick” villain Ramses IV is a foul-mouthed thug whose gaudy lair, bright yellow track suit, and pharaoh-style eye makeup give away his obsession with all things Egyptian. So does his name, but he really wants you to get the point.

Scott Speiser, who plays ostensible hero Overkill, has had several roles on shows such as “NCIS,” “Mike & Molly,” and “Agents of S.H.I.E.L.D.” He also played Fisk on venerable soap opera “The Young and The Restless” earlier this year. As Overkill, Speiser wears special contact lenses and a bulky superhero suit while killing everyone that gets in his way. Think “Batman meets the Punisher (and possibly Iron-Man),” then add a heaping dose of anger on top—that’s the aptly named Overkill.

Both actors participated in the below interview right after San Diego Comic-Con 2017. They had an easy camaraderie that came out during the discussion. Below are some of the highlights of what turned out to be a very funny conversation:

On working with the rest of the cast and going to SDCC together:

Scott Speiser:  We all didn’t get to work together too much until towards the end. A few weeks ago, we all got together and watched the first four episodes, which was really fun.

Michael Cerveris:  I can bear witness.

SS:  Ok, thank you, thank you. So I am in the fun group, being that it is a comedy, it was really cool to actually get to learn that the people you are working with are very fun.

MC:  I think that it makes sense because the material is so fun and Ben is so particular about the—you know in an oddly loose way, but still very particular about the tone of the show and the tone of the character. [I]t is not that surprising that the people that [producer] Dave [Fury] brought in to this and the people that have gravitated to it…share that kind of spirit of mayhem and fun and oddness. Also, I think that it is probably true that Tick fans are among the cooler kind of people, you know, and more fun people in general.

(Later in the interview):

MC: It is not easy to get to Comic-Con period and to have somebody bring you there is kind of the best way to do it. But, it has been really exciting and really constantly surprising.

SS: What it means to people.

MC: We got to screen it for people and we all snuck out. We were supposed to be in some holding room, but as has become “The Tick” team pattern, we eluded our handlers and went out front to watch because we wanted to watch people watch the show because you don’t get to do that on TV, and it was so, so gratifying to feel like people are really—they get it the way that we hoped that they would.

The Nerd Element asked the actors to discuss how they approach their characters and if it “is fun to play such evil”:

MC: Yes, it is fun to play such evil. I mean, basically, I just get to finally do something productive with my natural evilness [everyone laughs].

I grew up a comic book kid, so I was really excited to get to be part of this world.

SS:  [Overkill] is so angry and so fed up and so vengeful and so frustrated that he has no patience or tolerance for anyone around him and I, myself, am a pretty easy-going guy, but I have moments, you know. When I am on a sidewalk and a whole family is taking up the sidewalk; when someone is driving real slow in the left lane; or I find, in this country, that most people think that the escalator is a ride and it is wide enough to stand on the right and people can walk up the left. [T]hings like that infuriate me and I have an internal thing where I just want to, you know, scream or something more and I am not a violent person.

If I had a history like Overkill has and I had the access to that many weapons and the ability to elude the authorities like he does, then I could do the things that he does. For him, there no such thing as overkill.

Speiser is asked how much of Overkill’s look is the suit:

MC:  Scott doesn’t even wear a costume; they just paint him black.

SS:  [T]hat’s all just stuff that I brought from my closet and [creator] Ben Edlund and the costume designers were like “Perfect!” I would be lying if I said that I had a lot of fight training.  I have decent physical training so I was able to do some of it, but there is a stunt double. His name is Ben Rezendes and he is fantastic; there are definitely a lot of parts where you’re going to see me look really, really cool and sadly, it is him.

I wear these contacts—I don’t know if you have seen them or not. I don’t wear contacts in real life, so that was a new challenge; they are big and thick and I don’t see very well out of them.

I have worn costumes in the past but this provided a new challenge. In a way, it probably helped the Overkill vibe.

MC:  He would be so pissed off.

MC:  I think that I based Ramses—to the extent that I have based him on anybody in particular—probably Yul Brynner in The Greatest Story Ever Told*; certainly my hair style and also I think that Ramses thinks he is Yul Brynner in that movie. I think that it is apparent to the rest of the world that he is not, and that disconnect frustrates him and fuels his anger and his feeling, especially with Ms. Lint [Yara Martinez] who actually has a connection to The Terror [Jackie Earle Haley]. [She] worked for The Terror. [T]he fact that Ramses can now boss her around and has her under his thumb and she really just has to put up with it, I think that that is endlessly pleasant and pleasurable to Ramses.

If I had a supervillain power, probably mind control, like thought control, to just make people do what you wanted them to do, like bring your pizza faster and not screw up the escalators for everybody.

I wouldn’t say that I based Overkill on anything in particular; originally, the character was called The Punishment; upon reading that, I [thought] okay, I will learn a little more about The Punisher in some crazy idea that maybe they are connected somehow. I looked in to The Punisher a little bit, but to be honest, there is no one in particular that I based him on.

[A]s far as a supervillain power, most of what drives me all day and night is food, so it would probably be [to] make any food appear at any time. If I was a villain, I would turn that in to [taking] anyone else’s food.  Like right now, whatever somebody in Bangkok is eating, some delicious, hot food, Boom! It is gone and now it is right in front of me. That would be the evil version of what I guess a superpower would be that could be on “The Tick.” Uh, Ben, if you’re listening, you need to add that. [When asked what that character would be named, Speiser said, “Food Thief the Gobbler.”]

On Speiser’s approach to playing Overkill when he’s not overkilling things:

SS:  He very much likes to be alone; he very much does everything on his own. He doesn’t want people around him, so the idea that he is thrust into this world with people like Ramses and people like this giant, blue, buffoon Tick creature showing up—there is nothing about us that seems to connect and so he is forced to deal with all these people.

He doesn’t want to have to talk to anybody; anytime I am in a scene with anyone, anything they say and anything they do is like “Arrrrr! Arrr!! Slowing me down!” [In] the scenes where I don’t get to slice someone’s head off, I can just breathe. […] The dialog allows me to do that, too. I am definitely dropping more f-bombs and I think my mom would not approve. When she sees it, she will say to me, “Oh, why are you the one that is saying that word?”

MC:  The lair is as fabulous as it looks and it is actually the Masonic Temple on 23rd street [in Hollywood]. [T]he art department on the show is so great and so subtle, and one of the things that is going to be great for people is to go back to [each] episode to see gags in the background.

Between that and the gold velour suit that I wear in the third episode with the Gucci tennis shoes—when you’re an actor and that is your costume, you don’t need to even show up; just put that on and the character is done.

SS:  [M]y favorite costume in the show is his gold track suit. I wasn’t there that day when he shot that, but then when I saw footage of it, I thought that it was the funniest thing.

*Editor’s note: Yul Brynner does not appear in The Greatest Story Ever Told (but also-bald actor Telly Savalas does)