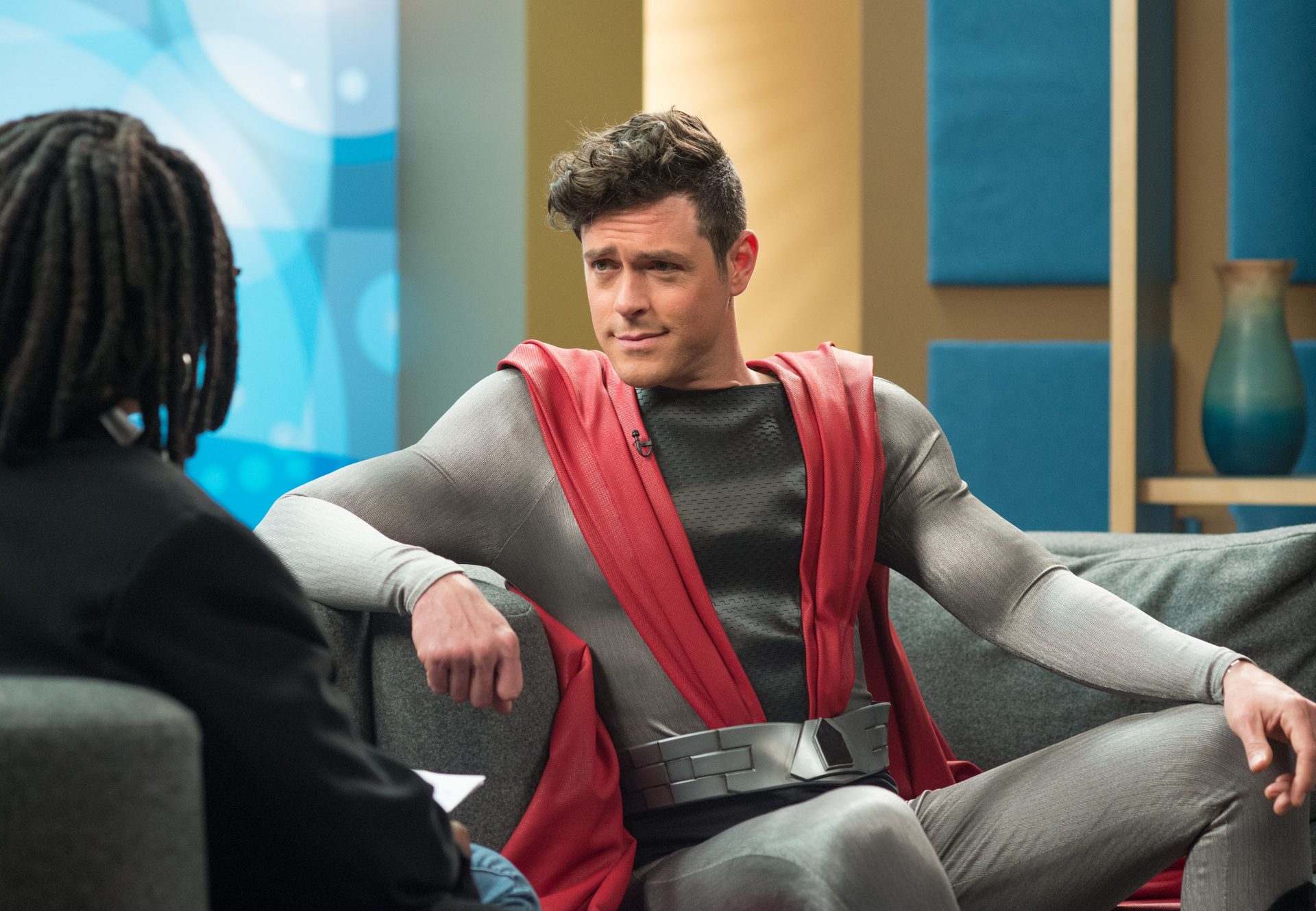 The Tick is not the only friend his once-and-future sidekick Arthur has, nor the only hero The City’s ever seen. There’s Arthur’s sister Dot (Valorie Curry), who’s both dealt with and supported Arthur when his mental health wasn’t optimal. Dot’s an EMT in The City; she moonlights as well as a stitch-up woman for the local mob.

Superian (Brendan Hines), The City’s analogue to Superman and other pure-of-heart heroes, destroyed ultra-nemesis The Terror, but not before The Terror destroyed young child Arthur’s sanity. As played by Hines, Superian is a dashing specimen; he’s also kind of, well, superior in attitude.

Curry’s scored several television roles nerd fans will recognize, including Jane Kuhne in nerd-beloved series “Veronica Mars”; Emma Hill on “The Following”; and Kelsey on cable’s “House of Lies”. She also appeared in the 2016 Blair Witch remake as Talia.

Hines has been very active as well, having played Tyler Ford in another nerd-beloved series, “The Middleman”. He also played Eli Loker on “Lie to Me”; Gideon Wallace on “Scandal”; Logan Sanders on “Suits”; Drew on “Scorpion”; and Aiden on “Betrayal”.

Curry and Hines sat together for an interview right after San Diego Comic-Con 2017. As with interview duo Scott Speiser and Michael Cerveris, the two actors played off each other well and seemed to enjoy working together and with their co-stars, as they discuss in the consistently funny highlights below.

On what drew each to the project:

Valorie Curry: I think that the truth always has to be said before everything else, which is that actors like to work on things that pay them. “That’s a job, I’m drawn to that! I have rent to pay.”

But for me, part of why I decided to do this is [that] I was really excited to work in comedy. I have spent most of my career doing some dark, intense stuff, which I love, but partly it was having the opportunity to work with these amazing comedians and also having just a nice, normal character who likes to wear jeans and gets blow outs […] and is empathetic and grounded and loving. That was exciting to me.

Brendan Hines:  [S]ame about the comedy. Who doesn’t like a nice blow out?  What’s a blow out?

BH:  Oh, hair. Okay. I was very excited to do a comedy and had been trying to do one for a bit, and this coincided nicely because I am also a big fan of the cartoon. I am also a big fan of getting to say very cleverly constructed, linguistically stylized word jokes—word salads that end in punch lines. I love that and Ben’s brain does that very, very well.

BH:  He does and it is so fun to not just be in a comedy but be in a really smart comedy that also is a pretty kind-hearted comedy. Those things are exciting for me. I think that I am approaching the time at which I was about to start aging out of being able to play a superhero, so I made it in just under the wire.

Hines on working with Whoopi Goldberg (who plays herself interviewing Superian):

That was the easiest scene that I have probably ever shot because it was a very brief scene. [A]s written, it is a three-page scene, but Whoopi and I ad-libbed for about an hour and it was so easy and effortless.  [S]he was a delight. [A]lso, like what Valorie said, they were paying me for that, so it made it double easy.

Curry on Dot’s relationship with Arthur:

My relationship with Griffin [Newman, who plays Arthur] is the finest relationship. [I]n terms of Griffin and I, from day one, [we fell] into a really easy chemistry for whatever reason. [I]n terms of Dot and Arthur, I think that their relationship diverge[s] in [the way in] which they dealt with the trauma of losing their father. [H]e has been dealing with the subsequent mental illness for his whole adult life.  Dot, because he broke, didn’t really have the luxury of doing so; [she] had to step in where her mother couldn’t and sort of took on a parental role with him. [S]he had to put aside her grief; she had to put aside her ambitions in life to always put her brother first and to take care of her brother. [W]hen she is faced with the possibility that maybe he doesn’t need her and he is not as sick as we thought or in a way that we thought, she has to eventually face what she was maybe avoiding or also what lingering resentment might be there. I think that is part of what forms the tension they have; there is so much love and that is this default between them, this love and this protectiveness, but they also both have these unaddressed resentments.

On the media’s portrayal of mental illness:

VC:  I am really sensitive to it because, without going into a lot of detail, it is something that I have a history with in my relationship and it is part of what did draw me to the character. [P]art of what forms the way that I play Dot is treating mental illness with the utmost seriousness.

It is never the butt of the joke. It is always treated with compassion, with seriousness in a way that I have never seen it dealt with on, at least, on a comedy. [O]ne of the things that we don’t see a lot is the effects that [it] has on the other people in the family; you don’t see the person who is the caretaker. [M]ental illness is sort of a shared experience and that is a very fascinating thing to get to investigate with her. [S]he is looking at trauma; she is looking at what happens with adults that end up as these sort of parentified children, not just with Arthur but also with their mom, and it is something that you see throughout the relationships as the world expands.

Hines on his approach to playing Superian:

That was the thing that I was most challenged by when we were starting because I wanted to find the right tone; I feel like we have seen a lot of the hyper-stylized, very broad, cheesy versions of this character and I felt that I needed to ground him more. [H]e is not from this planet, but he has been around people for 100 years and surely has taken on some of their attributes and learned about their behaviors, even if he doesn’t necessarily default to them all the time.  [M]e personally, I am not a beloved and revered God-like individual, so […] I thought who could be around for hundreds of years and have this love, this reverence that humanity would have for him, and I thought of old movie stars, Gary Cooper types and old sports stars, quarterbacks, even old presidents, back in the day when we revered presidents. Those are the people that I thought about and even on a less grandiose, but still heroic level, firefighters, astronauts, that kind of thing. I wanted him grounded; I wanted him to be aloof and arrogant, but also come from a real place.

On whether they read through the entire script (a reporter mentions the stereotype that actors only read their own lines/scenes):

BH:  We call that “bullshit bullshit my line.”

I think that there is always that temptation to do that […] but one thing that I was mentioning earlier is that it is nice to be on a show that you actually love all of the jokes and love all of the characters and love where the story is going. I read it the way that I do a comic book. I am enjoying a story that I am loving seeing how it is unfolding. [P]lus they talk about my character a lot, so….

VC:  Let’s be clear: We’re invested in scenes we are not necessarily in for other reasons.  [O]f course I read the whole script and a lot of that is to find out what happened, but also because I find it so funny. I want to hear the jokes before I watch the episode, but at the same time I kind of have to read it and then let it go because Dot exists in a different place in this world. [I]t is compartmentalized and that shifts and changes to a degree over the season, but she is not privy to what is always going on. [I]t is like our little weekly serial strip comic that we get to keep up on every time we watch it. I love getting to see it come together.

BH:  It is a completely different thing when you are reading a script, a blueprint essentially for something that is novel and tough to pull off. […] I was excited to see these the first half of the season and see it finally come together, the stuff that I wasn’t there for and the stuff that I was there for but that the effects needed to be added later.

VC:  I like to see which improv bits make it in and which don’t, because, again, there are a lot of comedians on this show and another one is present right now. [E]ven sometimes we get pulled in to it and it’s fun. There is a lot of improv that goes on—a bit to our showrunners’ chagrin at times.

BH: It was great. We did an autograph signing and then we did the panel and I was overwhelmed. I knew that there were tons of Tick fans, but it was just great when you see, in person, the actual physical manifestation of how many people are excited about the show and feel passionately about it. [I]t was great to sit and watch them watch it for the first time, too.

VC:  I love Comic-Con. I love it because even though we are running around and we are doing press all day and that is what we’re there for, at the same time, that is not what Comic-Con is at all. This is the space for the fans; it is about unbridled enthusiasm and a lot of them, they are the cool people and this is their party and we are the guests. Especially with something like this—I don’t know about you, but I felt very much like I am the caretaker for a character that they love.  I am just kind of getting to babysit somebody that they have a very deep attachment with, so I love getting such engagement from it and see[ing] how we live up to those expectations.

BH:  [T]hat is a great point.  They are the ones giving it the power; and it is interesting to see what the response is like.

Check out the Season 1 trailer of The Tick!

The Nerd Element is going to WonderCon 2016!