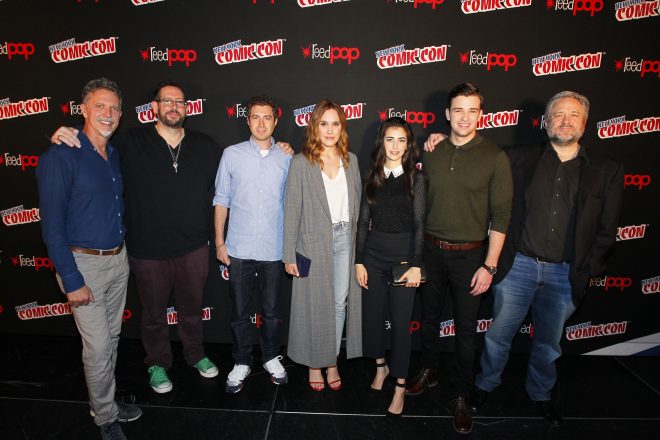 Both Beyond and Shadowhunters had their panels back-to-back at Madison Square Garden earlier today for New York Comic Con.  I managed to watch the live-streamed Beyond panel and some of what was teased in the season 2 trailer was discussed.  For example interaction between Charlie and the yellow jacket man.  Their scenes in the season 1 finale hinted that Charlie would give Mr. Yellow Jacket a run for his money. Definitely looking forward to that!   I look forward to more moments with Holden’s family and interaction between Charlie and the yellow jacket man in season 2.

Check out the press release below for a brief summary of announcements made during each panel and some trailers! Comment below your thoughts on either show!

Freeform Announces Premiere Dates for Season 2 of ‘Beyond,’
Sophomore Season to Premiere Thursday, January 18, With a Two-Hour Premiere;

“Beyond” kicked off the Freeform Super Sci-Fi panel by announcing that season 2 of the series will premiere onTHURSDAY, JANUARY 18, 2018, at 8 p.m. EST,with a two-hour premiere. Additionally, in anticipation of the season premiere, the network will air a 30-minute
extended sneak peek of the upcoming season on THURSDAY, DECEMBER 28, at 10:30 p.m. EST, presenting viewers with behind-the-scenes secrets and a special look at what’s to come.

The network debuted a special first look at the eagerly awaited new season and executive producers Adam Nussdorf, David Eick and Tim Kring revealed that this year would focus on Holden’s struggle whether or not he wants to embrace his powers and the consequences of his actions during the last season. The producers were joined by series stars Burkely Duffield (“Holden”), Dilan Gwyn (“Willa”) and new series regular, Eden Brolin (“Charlie”), who teased their characters’ love triangle will only get more complicated.

At the “Shadowhunters” panel, EPs and cast gave fans an exclusive first look at season three which will premiere on TUESDAY, APRIL 3, 2018, at 8 p.m. EDT.

Freeform announced an additional 10-episode pickup for “Shadowhunters” to air next summer.

Muñoz and Hopkins will guest star in season three as two new adversaries for our Shadowhunters crew – this season’s main villain, Lilith, played by Anna Hopkins (“Arrow”) and a rival warlock for Magnus Bane played by Javier Muñoz (“Hamilton”). Muñoz couldn’t be there in person but sent along a special video to fans that was played during the panel.

Part of the Disney|ABC Television Group, Freeform connects to audiences and goes beyond entertainment with bold original programming and immersive social engagement. As Disney’s young adult television and streaming network, it delivers a unique mix of quality original and acquired series, plus fan-favorite movies and the holiday events “13 Nights of Halloween” and “25 Days of Christmas.” The Freeform app is a service that allows viewers with participating TV subscription services access to 24/7 live viewing of the network, as well as continued on-demand access via a wide array of devices.