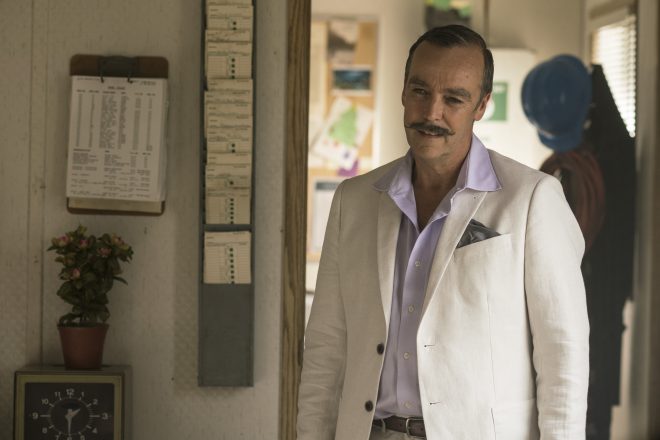 BBC America’s Dirk Gently’s Holistic Detective Agency is back for a sophomore season and it’s off to a wacky start with the episode title “Space Rabbit!”

In the premiere episode we are presented with several moving parts which will converge at some point this season.  Here is the official synopsis:

Todd and Farah are on the run from the law, heading to small town Bergsberg, Montana in search of Dirk. Mysteriously, Bart’s search for Ken takes her to the same small town, where odd, unexplainable events are starting to take place.

One thing I liked was how the new characters introduced so far were brought in and how they could potentially be connected to the existing main characters.  You know Dirk’s motto, “Everything is connected!”

It’s been two months since Dirk got captured by bastard Sgt Friedkin.  He’s been tested for his psychic abilities which he fails at miserably.  Friedkin isn’t understanding the memo from both Dirk and later Ken, that he’s wasting his time.

Poor Ken is hooked on an IV and in the same cab he was driving in with Bart and the corgi last season when captured.  That dog has been through the ringer too!  Here’s hoping they both catch a break soon!

I have never seen a more clueless character in Sgt Friedkin!  Dustin Mulligan is doing a hell of a job of making Friedkin annoying as hell.  Can Bart or anyone hurry up and kill him please?! I will rejoice when that happens.  Bring the other guy Riggins back. At least he understood what was what.

Dirk dreamed that Farah and Todd rescued him. Nice throwback to season one with the masks! It seems to me that dream was a premonition because a mystery woman helps him escape.  It was cool seeing her turn into many different objects to reach his room.  Who is she and why does Dirk recognize her?

Meanwhile Todd and Farah are looking for Dirk while avoiding Blackwing.  What I enjoyed was the tease into Farah’s background.  She doesn’t even have time to grieve her father who passed away because of Todd’s obsession with finding Dirk.  What’s messed up is Farah doesn’t confide in Todd about her father.  She still has trust issues.  Farah has the patience of a saint, especially with dealing with Todd’s pararibulitis.

Wood and Eshete had several good scenes together in this episode.  The one that resonated the most was Farah wanting to communicate with Todd after chasing the rabbit.  Todd’s reasoning for pushing their search and his acknowledgement that he deserves his illness made sense.  Farah taking that pause to pull Todd back and make sure they were on the same page was good.  Also, I thought it was clever that Todd described the rabbit he saw as a potential “space rabbit” which is also the name of the episode!

I’m so proud of Bart! Ken is rubbing off on her. She didn’t kill Suzie (more on her later) although she could have.  Bart still had one of the best entrances when she does her killing thing. I want to see her go against the Mage just to see what happens.

There was an interesting parallel between Todd and Bart because they are both looking for the person that Blackwing is holding prisoner. They both brought an earnestness to their search because of how the relationship with Dirk and Ken have changed their lives.

Last season Amanda (Hannah Marks) escaped with Vogel (Osric Chau) when Blackwing captured the other Rowdy 3.  The vision she had last season was a highlight for me as it gave clues to what was coming. She has a vision again during the premiere as she’s on the hunt for her friends.  Here’s a breakdown:

It is interesting that the images are coming superfast like Amanda described and in shorter bursts. What does that mean? Is she getting better with her disease? Or is there a time limit that she will see what she just saw before getting more clues? Right now, the images are mostly pointing to where Todd is heading.

We got new characters and a new world called Wendimoor.  Since time travel was possible and soul swapping, why not another world?  Of what we have seen so far of Wendimoor, which isn’t much, I dig the sword size scissors.  The fight scene at the very beginning of the episode was entertaining in its simplicity.  It gave possibilities like cut limbs from using a weapon like that.

Wendimoor has two families on the verge of war because the son from one family is missing.  The other family is accused of kidnapping the boy.  The two families need to stop their beef or they will be no match for the Mage (John Hannah) when he brings his army to attempt a takeover.  We learn that Dirk Gently is the key to finding the missing boy because of a prophecy.

Best surprise cameo: Roger Cross as Farah’s brother! I’m still miffed about Syfy cancelling Dark Matter, but seeing Cross again in another show eases the pain slightly. I’m praying we see him again this season, even for a few minutes.

Suzie Boreton starts off as this season’s underdog.  We get a glimpse in the first few minutes of meeting her that her life isn’t great.  She has a son who needs old school discipline.  If he had put fire crackers in my car and talked to me like that….

I noticed that she saw Bart twice. Once as she was driving to work and then when Bart saved her from the assassins.  That scene was another standout to me. It was cool seeing Suzie use magic, although I didn’t like it was against Bart.  From the preview we saw of the season, soon her family may treat her with respect.  Amanda Walsh brings a wholesome quality to Suzie that you can’t help but root for her.

John Hannah plays weird so well that I’m looking forward to seeing him do magic as The Mage. It was jarring to see him murder the manager with a pencil so casually.  He was also ruthless enough to have Suzie killed despite her not calling the police on him. Did he sense her magic ability and saw it as a threat? It could just be tying up loose ends.  Who the heck broke into that old house where he is staying with blood on the floor?

Tyler Labine as Sheriff Hobbs brings a quirky innocence to the character that is just adorable.  It was hilarious that he has a cap to cover his hat in the rain.  Law enforcement does not have a great survival rate (RIP Estevez) so here’s hoping Hobbs and his deputy survive being around Todd, Dirk, and co. Stay away Friedkin!

Wacky, quirky, and sentimental all at the same time, this season promises some crazy weirdness that somehow brings connecting points together.  A missing boy needs to be found before two families go to war.  I’m praying that the boy is NOT Suzie’s son. A mage needs to be defeated so Wendimoor is safe. Dirk is the key.

What did you think of the premiere? Do you have a fave new character? Sound off below in the comments.