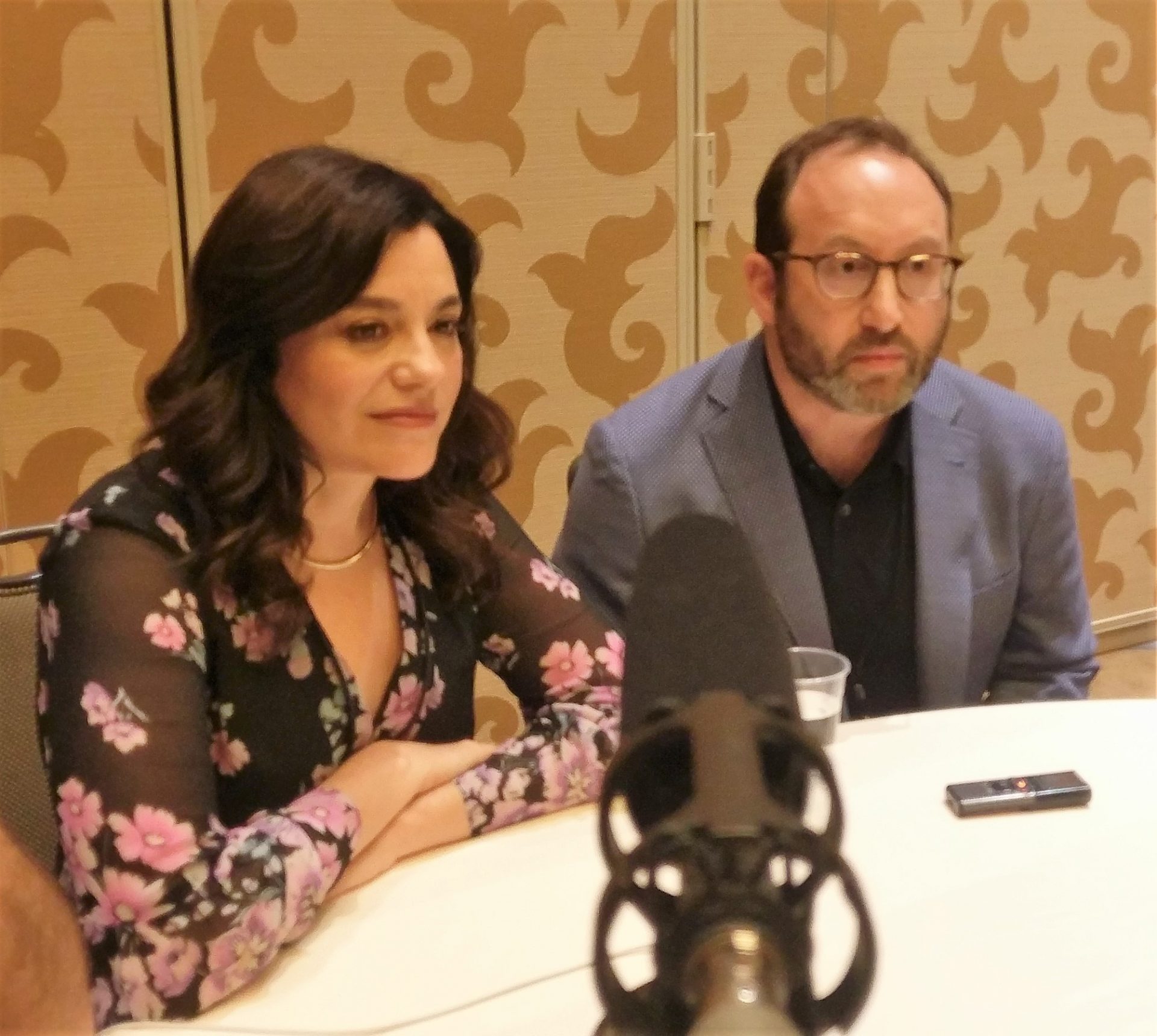 When we last left the denizens of National City, Kara/Supergirl (Melissa Benoist) and the team had defeated the Kryptonian plan to terraform the Earth into a new Krypton. J’onn J’onzz/Martian Manhunter (David Harewood) mourned the loss of his father (Carl Lumbly), who gave his life to save the Earth. Sam (Odette Annable) was freed of Reign (also Odette Annable), who was then defeated by Sam and Supergirl. Unfortunately, Reign’s death throes also resulted in the deaths of Alura (Laura Benanti), Mon-El (Chris Wood), and Sam. Supergirl chose to go back in time to save everyone without killing Reign, who winds up getting carried off in the Dark Valley, presumably never to be seen again.

Meanwhile, Mon-El (Chris Wood) and Imra (Amy Jackson) broke up; Brainiac-5 (Jesse Rath) learned the future was not safe for him, so he stayed behind while Winn (Jeremy Jordan) went with Mon-El and Imra back to the future. Supergirl returned to National City instead of staying on the Kryptonian oasis with her mother, while James (Mehcad Brooks) came out as Guardian to everyone, Alex (Chyler Leigh) took over the DEO when J’onn stepped down, and Lena (Katie McGrath) became a little more Luthor-like when she kept the knowledge that she has more of the Harun-El to herself. Her relationship with Supergirl was also strained. And oh, hey, look, a Kara double landed in Siberia.  Hello, Superman: Red Son (or in this case, Supergirl: Red Daughter)!

Season 4 opens a few months later, with everyone settling into their new roles. Supergirl is everywhere saving everyone while Superman is off-world, Alex is being ultra-annoyed with Brainy because he isn’t Winn, James is worried about being indicted for the “crimes” he committed as Guardian, J’onn is working with alien self-help groups and learning that anti-alien sentiment is growing, and Lena is visiting her evil-doer mother (Brenda Strong) in prison. Over in Russia, that other Supergirl is causing earthquakes because she’s working underground punching out a tunnel. Sam, Mon-El, Winn, and Alura are out of the picture entirely, while Kara is training a new reporter, Nia Nal (Nicole Maines), at CatCo.

A lot of themes set up in the episode are resonant with current times. At roundtable interviews at San Diego Comic-Con 2018, Supergirl producers Robert Rovner and Jessica Queller discussed what we can expect for Season 4, including their take on the alternate reality of the Red Son story, wherein Kal-El/Superman landed in Russia instead of America and what that meant for his development as a “superhero.” It’s a classic Supes “What if…?” story.

Rovner stated that the new season “is about which is stronger, hope vs. fear,” noting that the show will return “to some of the more grounded stories that we have told. You know that Superman is always reflective of real-life issues that are happening, so we will be telling stories that reflect our time. In terms of the Red Son, we are telling our version of it and we teased it out at the beginning of the season.”
Queller added that the alternate reality version of Supergirl, who was generated because Supergirl chose to reverse time and alter events (something she probably should have asked The Flash about first), “is more of a runner and then it will blossom to more of a mystery. It is not the main meat of the season, at the start.”

Rovner reiterated the groundedness of the new season. “We spent a lot of time off worlds last year,” he said, “and I think that one of the things the end of last season did for Kara was to really solidify that Earth was her home. I think that knowing her mother is out there brought a sense of peace and closure.” He added that while they love having the character of Alura in the mix, they will be focusing on everyone in Kara’s family.

Several new characters are being introduced this season, helping the showrunners to explore the various themes set up in the first episode, especially the metaphor of anti-alien (as in, other-worldly people) sentiment that’s been present since the first season. They’ll also be exploring another negative sentiment that’s arisen more prominently in the past few years in the real world, that of hatred and distrust of the press, which means more time will be spent at CatCo, a setting many fans have missed since Calista Flockhart (who plays Cat Grant) left the show.

Rovner stated that they “are excited” to be back at CatCo, and that “one of the things that we have been talking about is the press and how free press is very important. . .”  Queller agreed that now “seems like a really powerful time to tell allegorical stories.” The anti-alien and anti-press sentiments dovetail into one person because Kara/Supergirl is both an alien and a member of the press. Queller noted that Supergirl will struggle with combatting the fear of aliens through her role at CatCo. “Kara Danvers is a reporter,” she stated, adding that “we will see that being a reporter is as heroic as being Supergirl.”

Taking on real-life issues “is in the DNA of Superman,” Rovner said. “He has always spoken out on social issues and tried to be the proponent of truth and justice, so we feel a responsibility to carry that torch.”

An important new character introduced in the first episode of season 4 is Nia Nal, a.k.a. Dreamer, played by Nicole Maines. Maines is the first transgender actress playing a superhero. Queller discussed Nal’s place in the show: “She is a cub reporter who was sent by Cat Grant; she worked for Cat Grant as an intern at The White House, and Kara is going to be her mentor. What we learn about her is that she is the great-great-great-great-great grandmother of Nura Nal, who is Dream Girl from the Legion, and her superpower is seeing the future.”

“We are just over-the-moon that we found Nicole Maines to be our Nia,” Queller enthused. “We did a worldwide search for trans actresses and not only is she a phenomenal actress, she is also a real-life hero. She has been an activist in her community since she was 14-years-old. She was honored by GLAAD. She is an incredible woman, so we just couldn’t be more excited.”

Another new character is Agent Liberty, played by Smallville actor Sam Witwer. Rovner stated that Witwer “is a wonderful actor [and] we are excited to have him on. We think that Agent Liberty is different than the comic books, but he will have his own origin story and it is a very layered approach to understanding who he is and why he is the way he is.” Queller added that, as with their take on Reign, “he is not going to be a mustache-twirling, one-dimensional villain. We are going to see all the forces that made him become who he is and why.”

Queller also noted that “Agent Liberty, and his group, the Children of Liberty, are going to be spreading fear and hate of Supergirl” as part of the anti-alien sentiment spreading throughout the land.

The Nerd Element asked about one of Supergirl’s long-standing friendships, that with Lena Luthor, which as noted in the introduction, has been strained due to the events of last season. Rovner said of that relationship, “I think that Lena and Kara are best friends [and] I think Supergirl is trying to make amends with Lena.” He said that Lena will “continue to grow closer to Kara as there is still tension mounting in the Lena/SuperGirl front.” The Nerd Element wondered if we’ll see the conflict that causes in Kara, with Rovner indicating that the Harun-El secret from last season will eventually “become an issue” as well.

The last bit of carryover from last season will be Alex’s desire to become a mother, which will eventually be part of her narrative this season. All in all, it sounds like a pretty exciting season is in store for Supergirl’s legion of fans.