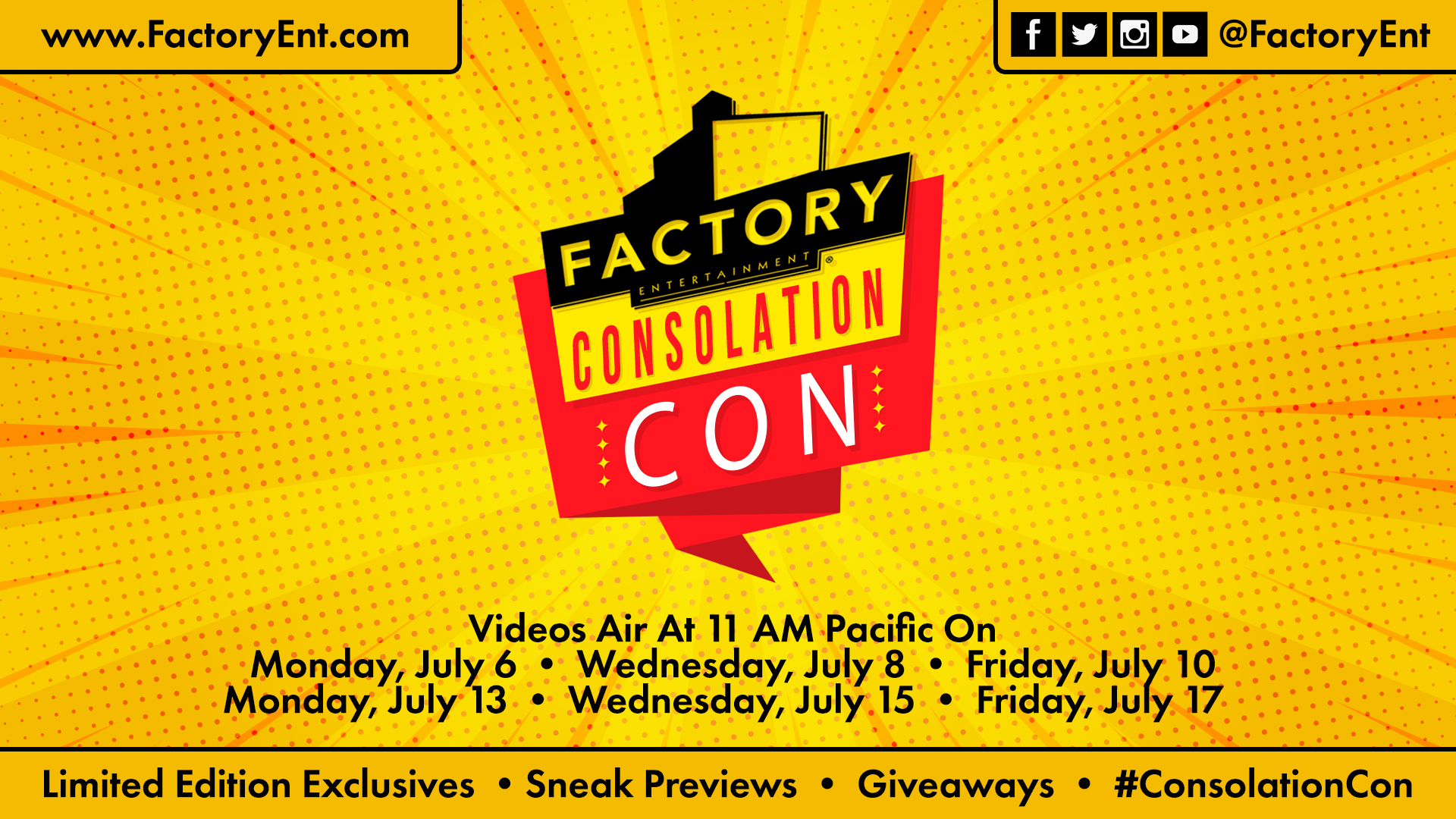 Today Factory Entertainment announced a Consolation-Con to replace their booth we all know as a staple icon year after year at San Diego Comic-Con. With the creation of San Diego at Home Con due to the ever-growing cases of COVID-19, many retailers have created virtual cons to sell their online exclusives. The press release is below. Let us know what you think in the comments!

Concord, CA – Factory Entertainment, Inc announced today that it will be launching “Consolation-Con,” a virtual replacement for its annual San Diego Comic-Con booth, on July 6, 2020.

“Our annual trip to San Diego Comic-Con is usually the highlight of our year” said Jordan Schwartz, President and CEO of Factory Entertainment. “There’s no substitute for interacting face-to-face with the many fans who share our passion and love our products and with the attendees who may be encountering us at the show for the first time.  Due to the cancellation of San Diego Comic-Con, we can’t do so this July, but that doesn’t mean we can’t connect with our customers and try to capture some of the spirit of Comic-Con by inviting everyone into our virtual booth.”

Starting on July 6 and running through July 17, Factory Entertainment will host “Consolation-Con,” its tongue-in-cheek name for a series of six streaming video presentations, premiering at 11:00 AM, Pacific Daylight time, every Monday, Wednesday and Friday at FactoryEnt.com and @FactoryEnt on Facebook, YouTube and Twitter.

Here’s what collectors and fans can expect:

Each video will unveil several of the 16 officially-licensed, limited edition Convention Exclusive products originally created by Factory Entertainment for SDCC 2020.   These collectibles feature top pop culture brands such as Wonder Woman, Aquaman, Star Trek, JAWS and Monty Python, among others. Immediately upon announcement, the exclusives will be available to order online at Factory Entertainment’s website, http://www.factoryent.com.

In addition to revealing its Convention Exclusives, Factory Entertainment will use Consolation-Con to provide a sneak preview of some of its most exciting collectible offerings coming in late 2020 and 2021, including a number of breathtaking limited edition prop replicas, a category of collectibles in which Factory Entertainment is recognized as a market leader.  Fans will not want to miss these special previews, as most of the items have never previously been announced or have only been seen by the trade at New York Toy Fair.

Throughout the course of Consolation-Con Factory Entertainment will also be announcing exciting new licensing partnerships and special Consolation-Con giveaways in conjunction with various social media partners.