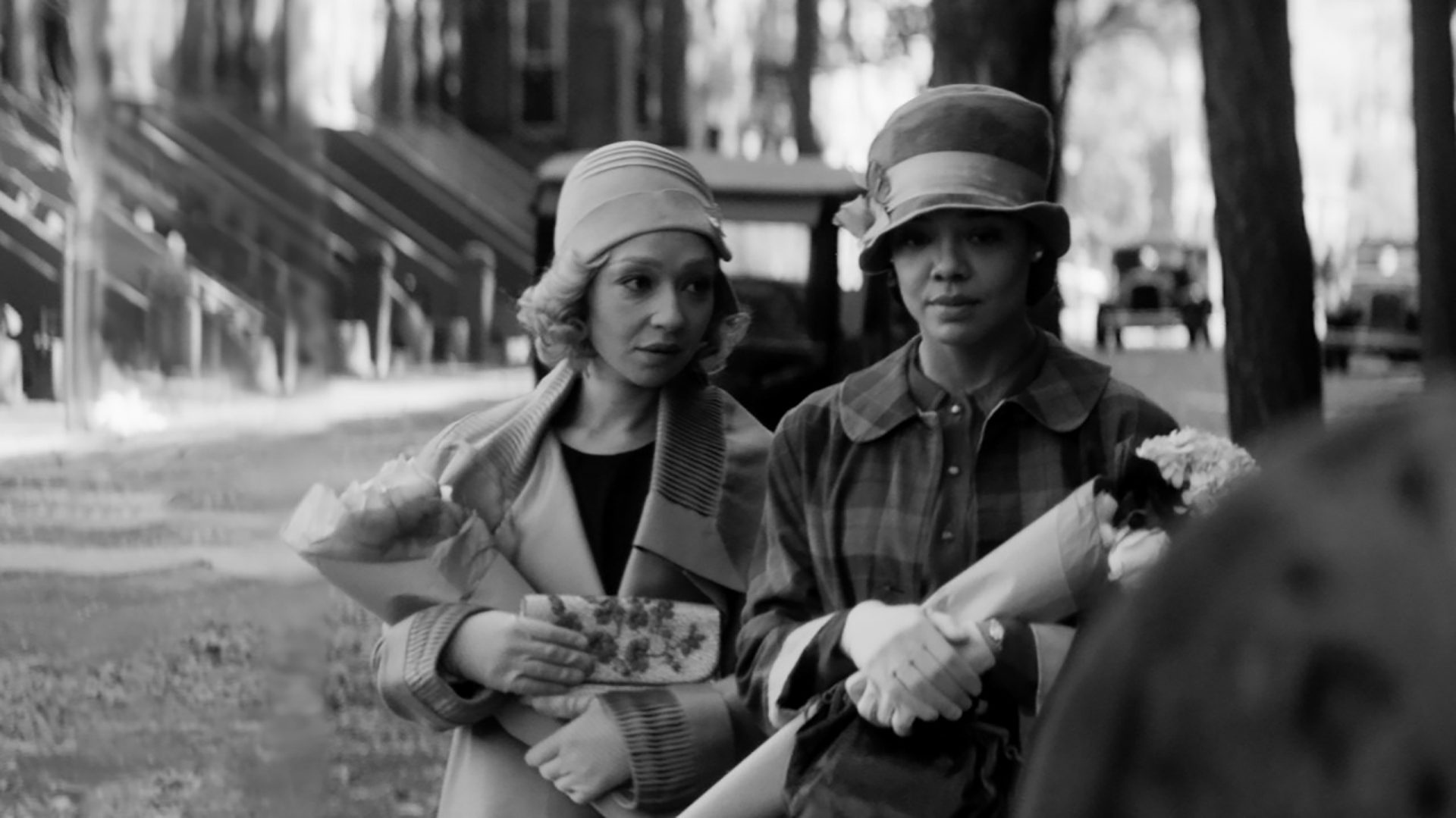 Passing recently premiered at the Sundance Film Festival. The drama follows the reunion of two women who were friends in high school. Both can pass as white, Clare (Ruth Negga) chose to do this and is married to a white man who doesn’t know she is black. Irene (Tessa Thompson) chose not to live that way and is married to a black man. Both live very different lives, their renewed friendship turns more into an obsession that threatens their existence.

This is Rebecca Hall’s directorial debut as well as her first writing credit. Hall is best known as an actor for films like The Town and The Prestige. The film is based on the 1929 novel by Nella Larsen. The subject matter is close to Hall’s heart as her African American grandparents passed for white. She discovered the novel at a time when she was questioning her identity and looking into her family history.

Ruth Negga (Loving, Preacher) and Tessa Thompson (Creed, Thor: Ragnarok) are fine actors and it’s no surprise that they put in strong performances. Negga has the more fun role, with Clare pushing the envelope more than Thompson’s Irene. Irene is very keen to keep the moral high ground. A lot of their acting is through their body language and subtle looks, something both are great at. André Holland (Moonlight, Selma) is equally as good as Irene’s husband Brian. Holland has a strong screen presence and proves an equal match for both Thompson and Negga when called upon.

Passing is shot in black and white and is in a 4:3 ratio, those choices make sense given the period and subject of the film. It was more than just a stylistic choice for Hall, she wanted it to be in direct contradiction to the nuance on show in the film. People like to split things into black or white but really everything is a shade of grey. Personally, I would have preferred a wider format with the black and white. Having both felt a little too much but I understand why she made that choice.

The cinematography for the most part is understated but services the story well. Lots of close-up shots of the faces of the main characters, helping us get under their skin. However, the start of the movie is a little blown out. They were trying to emphasise the whiteness of the situation the leads were in. The production design made this point, a well exposed image would have been enough. No need to ruin the scene created by trying to overemphasise a point.

Devonté Hynes (Queen & Slim, We Are Who We Are) did a good job with the music. However, there needed to be more. In a Q&A session after the premiere, Hall explained that she chose to go with mostly ambient sound to allow the audience to get into the scene and feel what Irene is feeling. I’m usually a supporter of limiting the score and not relying on the music to convey too much but not in this case. The film was too quiet, especially in the beginning. The film didn’t fall into a natural rhythm and score could have helped the film flow.

Rebecca Hall has stated that the novel raises questions about race, class, sexuality and gender. That is a lot to cover in a movie that is only 98 minutes long. Passing is trying to do too much and actually ends up failing to make much of a statement about anything. It’s an ambitious story to take on as a first feature and Hall does an admirable job, but it doesn’t quite hit the mark. It seems like she wants you to take from it whatever you want but it could do with being a bit more focussed to ensure the audience comes away with anything.

Passing is extremely well cast and that is definitely the highlight of the film. It felt a little over worked at times, with flourishes from the director being a little heavy handed. However, Hall showed that she has ability to direct and it will be interesting to see if she decides to take on more projects or work mainly as an actor. Passing isn’t a must watch but will be of interest to fans of Ruth Negga and Tessa Thompson, both are impressive.

Netflix has acquired the rights to Passing for over $15 million so expect to see it on their streaming platform in the coming months.