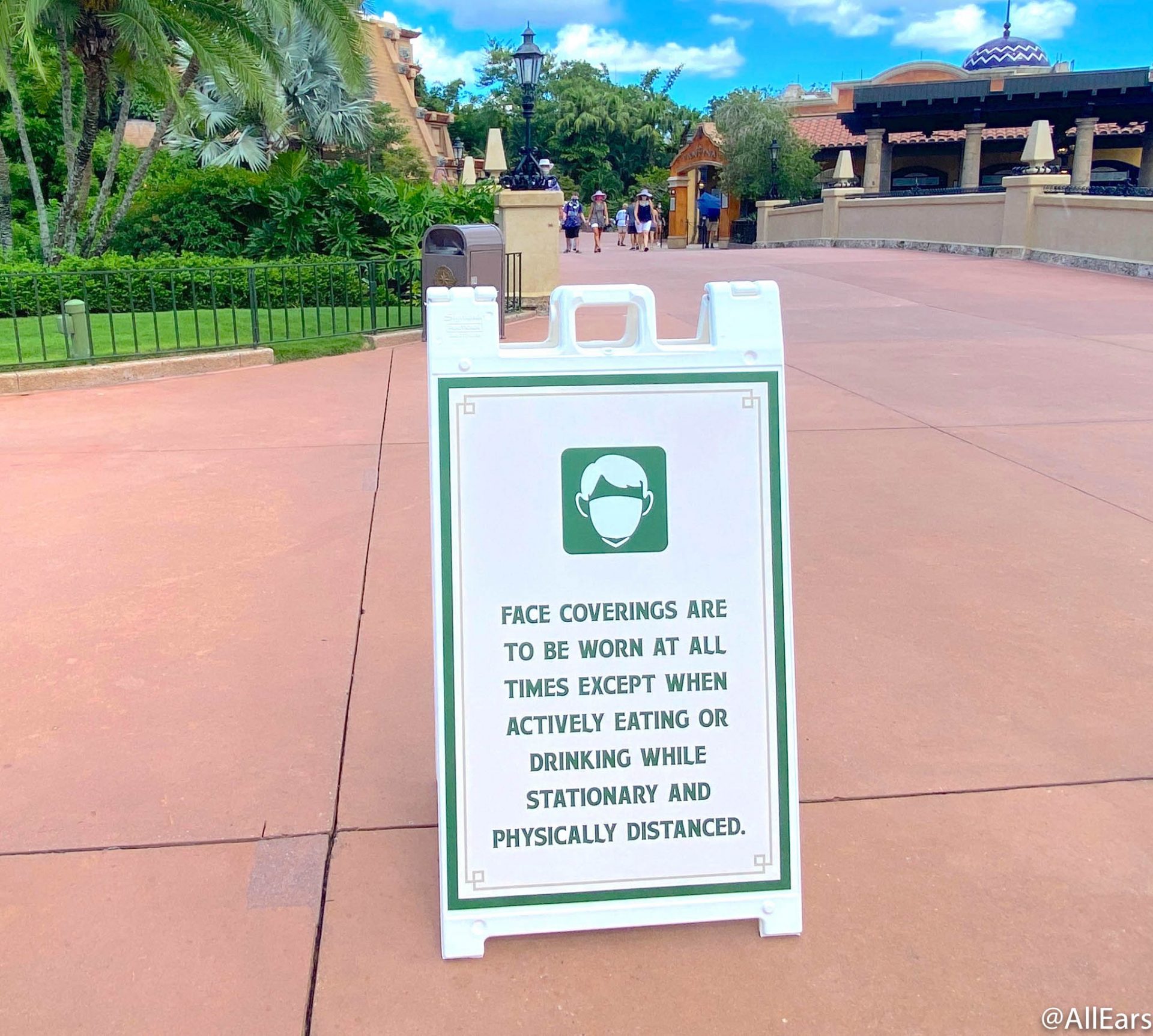 Hi everyone! Today I have some big updates that I want to share with y’all! So, let’s get started, shall we?! At Walt Disney World, they have made another change to its rules inside the parks. Since Disney World reopened in July after its Covid-related shutdown, the Mouse House has been changing, altering and tweaking its on-site rules to make the experience as fun, efficient and safe for guests as possible. At times that has involved easing off on some of the capacity limitations, and at times that has involved being stricter about safety protocols. The latest update to protocols definitely falls into that latter camp, as Disney announced it will be stricter about guests wearing their masks during meal times.

Obviously, you can’t wear your mask while you’re actually eating, but until this point, the rule has been for guests to keep their masks on until reaching their table. That’s not the case anymore. Disney’s website updated its policies to let guests know they now need to be wearing masks while at the table unless they’re actively eating or drinking. In practical terms, this means people need to keep their masks on while ordering and interacting with the staff, prior to their meals arriving. Assumedly, all involved will take their masks off when the food actually arrives and then they’ll put them back on once they’re finished. Here’s the exact language on the update. Please excuse the grammar, as it was taken from the bullet points of a larger list…

No doubt this change will cause grumbling among some parkgoers, many of whom find a reason to grumble about everything, but I think for most people, this will seem totally understandable. Disney, of course, wants the experience in the parks to be as easy and fun as possible, but it’s also important that cast members (in this case: servers) are able to work as safely as possible. That means limiting interactions with guests who don’t have their masks on. This will be a big step toward doing that.

It’s probably not unfair to say the Disney Parks are experiencing their biggest challenges ever. The months long shutdown resulted in staggering losses, and upon reopening, the staff had to figure out a way to reorganize and alter many of its most basic procedures including how people stand in lines. Fast Passes had to be eliminated because of the dual ride queues, and many of the hotels still aren’t opened back up because of capacity issues. On top of all that, every time there’s a new governmental rule or an update in public health findings, the team must decide how to make changes and adapt. It’s a constant evolution.

Disneyland is still not open in California, though there has been forward progress. Fortunately, whenever it does open, the Mouse House will be able to take all it has learned from this period of experimentation within Disney World to hopefully launch as efficiently as possible. That means providing a balance between letting guests have fun while also putting a number of rules in place that help to keep people as safe as possible. This new mask rule is a good example of that, and it’s nice to see Disney continue to be proactive about these changes. I like this new ruling because they now want you to keep your masks on while sitting down at the table, talking to the waiter/waitress about what you want to eat and drink, and waiting for your food and drinks to come. Once your food and drinks arrive at the table, you can take your masks off and enjoy the meal. Once you are done eating and drinking, you can put your masks back on. I think this new ruling policy makes much more sense because they are trying to be more careful with the cases going up or down so I like how they changed it to be stricter meaning they are making sure that people are not spreading the virus to infect other people. Very smart of them don’t you think?

Over at the Disneyland Resort, the California Legislators are still trying to pass the bill to potentially reopen Disneyland and the other theme parks sooner rather than later. the bill to reopen California theme parks in the Blueprint for a Safer Economy’s tier 3 instead of tier 4 (Assembly Bill 420) can be heard in committee on March 7 and therefore could be making progress very soon. California legislators and state officials are seeking to expedite theme park reopening so that all theme parks and amusement parks in California can reopen in tier 3, regardless of their size. This would mean that theme parks like Disneyland Resort in Orange County and Universal Studios Hollywood in Los Angeles County could potentially reopen as soon as April, if the bill passes.

Both the Anaheim City Council and the LA County Board of Supervisors have voiced their support for AB 420, a bipartisan bill sponsored by assembly members Sharon Quirk-Silva and Suzette Valladares. The California Attractions and Parks Association — which represents theme parks and amusement parks across California, including Disneyland and Disney California Adventure as well as Universal Studios Hollywood — has also advocated for the bill to pass so that all theme parks can reopen sooner rather than later. At this time, California has separate reopening guidelines for large theme parks — defined as those with daily capacities over 15,000 — and small theme parks. Assembly Bill 420 seeks to remove this separation and allow all amusement park properties, regardless of size, to reopen in tier 3.

According to the bill, it may be heard in committee on March 7, so many theme parks fans and supporters of the bill hope to get some good news regarding the reopening of California theme parks sometime soon. We’ll update our website when more information is released regarding the bill and the impact it may have on the reopening guidelines for large theme parks like Disney and Universal. I can’t wait to see what happens after March 7th committee, but you never know what will happen.

So, what do you guys think about the information?!

I would love to hear comments, thoughts, opinions, questions, and concerns down below!