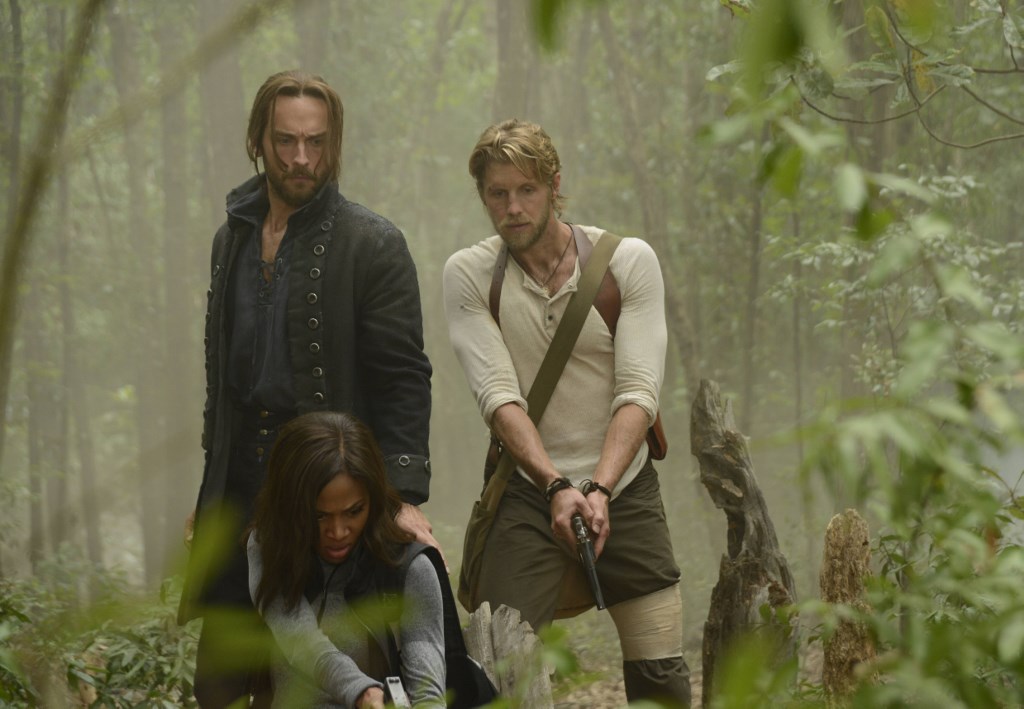 In this episode, “Go Where I Send Thee” we see the Sleepy twist of the Pied Piper story!  The title seems to have more undercurrent implications than on the surface, especially with Irving’s situation and how Hawley played into this story.  I like how the case of the week still has connections to our characters like Abbie.  At the start of the episode, lyrical music plays, and we see a little girl walking out of her house into the woods. As she’s walking further in we see a mysterious figure playing an instrument.  Just another night at Sleepy Hollow guys!

Ichabod shows off his driving skills, almost causing Abbie to have a heart attack. Ichabod has a heavy foot on that peddle!  Jenny has definitely been teaching him. That drive around the parking lot reminded me of the obstacle course from Police Academy.  Abbie wants to make sure that Ichabod can survive in the modern world if something happens to her.  Ichabod appreciates the concern Abbie has for him but he tells Ms. Grace Abigail Mills that they will both win against Moloch or die trying together.

Ichabod and Abbie get an Amber Alert on their phones.   The child’s name is Sarah and it is the same girl we saw at the beginning of the episode.  It turns out that Abbie knows the family, the Lancasters.  The mother (Beth) used to foster both Jenny and Abbie when they first got into the system.  Abbie thanks her for being a good foster mom as she kept her out of trouble. The mom mentions cryptically that she’s cursed.  We learn just how cursed the family really is. Ichabod plays peek-a-boo with the bushes and discovers the family surname Lancaster is based on the display in the room he’s peeking into.  It turns out that one of their ancestors, Daniel Lancaster, sided real late with the Patriots when the tide turned in the Revolutionary War.

Abbie and Ichabod start searching for Sarah in the woods when they find a scene of a potential struggle based on the blood found on the bark of a few trees and the ground.  They also find a hollow bone with holes in it like a flute. Ichabod calls it a jiahu gudi, a very old instrument. Ichabod starts playing it.  Seriously guys, this thing was just on the ground, he barely cleaned it and he’s touching his lips to it?  Abbie goes into a trance from the music coming out of the flute.  She’s walking towards the water when Ichabod stops her. He realizes they are dealing with dun dun dun… the Pied Piper.

Gosh that brought me back to elementary school learning the different instruments, especially when Ichabod was describing the notes the flute plays!  We find out that the flute was created similar to the piccolo.  Ichabod mentions he had heard a story about a group of British soldiers who stayed in Sleepy Hollow.  One night, entranced by music played by a mysterious man, they go outside and get slaughtered by that same man.  The Piper was an assassin! 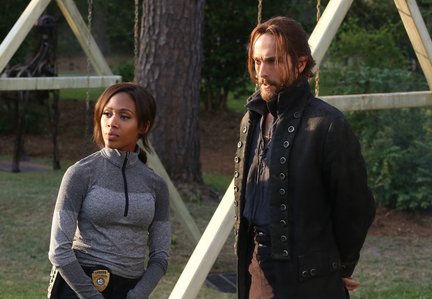 Back to the Woods

The problem is we still don’t know the motive for kidnapping a little girl.  However, Ichabod and Abbie conclude that she has to listen to the music since the last time she went into a trance she felt compelled to go somewhere.  Ichabod, brilliant man that he is, suggests that they record the music on the phone and have it in a continuous loop.  Abbie can listen on her earbuds so the music only affects her.  Ichabod does his first recording!  I thought it was funny when Abbie mentions they should cut an album when things get back to normal.

With that plan they go back into the woods.  Abbie puts her earbuds on and goes to trancy-land (yeah I know that’s not a word).  Ichabod follows her until he stops her thinking he sees the Pied Piper. Nope, it’s Mr. Nick Hawley bleeding on the ground, conscious.  He tells them he encountered the kidnapper who was really fast with his knife and saw the kid walk by him. Coincidently, he was hired to look for the flute.  Hawley provided a tale on his own based on the Lancaster curse.

So the story goes that night the soldiers got killed (it turns out they were staying at the Lancaster estate) Daniel hired the Piper to kill those soldiers after they got fresh with his daughters.  Ichabod figures the Piper sold his soul which is why he has super speed to help him kill his opponents effectively.  Daniel betrayed the Piper by killing him and dumping him in the river.  For revenge, the Piper lures a Lancaster daughter into the woods when she’s 10 then uses her bones to create the instrument. Ichabod played a flute made from a human girl’s bone.  Let that sink in for a second… 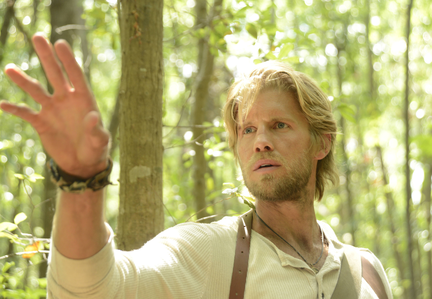 Hawley is the skeptic and doesn’t think who he encountered was really a Pied Piper, just some psycho dressed up kidnapping girls.  There’s still time to save Sarah because the Piper likes to starve them to death.  Abbie makes a deal with Hawley, if he helps them rescue Sarah he can have the flute, which she brought with her.

Ichabod warns Hawley that the Piper has created different weapons that create different sounds that could hurt his opponent.  Hawley of course doesn’t believe him, even though Abbie, in listening to the music on her phone, is able to lead them to Piper’s lair.  They also find Sarah and rescue her, but not before encountering the Piper himself. With a quarterstaff, he’s able to create this wind sound creating a frequency that seriously hurts the ears.  With a well placed light bomb, the gang manage to escape with Sarah.

They make a pit stop and Hawley, Ichabod and Abbie have an adult conversation in front of Sarah. Abbie and Ichabod decide they will go back to destroy the Piper, Hawley is demanding the flute.  Ichabod is disgusted with Hawley because all he sees is dollar signs in the artifacts he procures.  Abbie gives him the flute after she breaks it. Abbie was right in that the instrument needs to be broken so it’s not immediately used again. 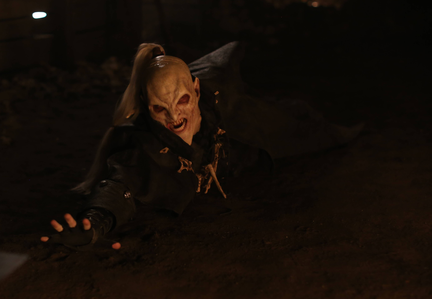 Happy ending right! Nope! There’s a twist to this curse.  Both Abbie and Ichabod noticed that Beth didn’t look too relieved that Sarah returned to them. They do some research and discover that in one instance when a Lancaster girl was found the other children died of a mysterious illness.  They realize that they have to kill the Piper to stop the illness from killing the adopted children and Beth for making a horrifying choice in sacrificing her daughter.  Ichabod takes Daniel Lancaster’s sword from the display area at the house and Abbie has him drive while she tries to reach Beth.  Abbie and Ichabod arrive in time to stop Beth from offering up her daughter.  That girl is going to need some serious therapy.  The Piper tries to take Sarah again but Abbie shoots at him while Ichabod starts fighting against him.  Ichabod’s fight with the Piper seems to be going well, especially since Abbie provided noise cancelling earbuds.  Unfortunately they fall out just when the assassin breaks out the quarterstaff again.  Ichabod’s ears start to bleed but he manages to hit the Piper on the foot and the head with a rock.  Abbie comes to the rescue when she stabs him with his own staff.

It turns out Hawley’s buyer is none other than Henry.  I knew that he would be indirectly working for Henry!  First with the coins, now with the pipe.  Even though Abbie broke it, Henry broke it even more by turning it to dust. So what is the purpose of grinding the bone into dust?  I’m surprised Abbie and Ichabod have not figured out yet who could be wanting these artifacts Nick is collecting.

Meanwhile back at Tarrytown Psychiatric Institute….

Irving starts reading from the book of Ezekiel in the Bible.  He imagines himself as a Rambo like warrior killing people with a machete!  Or was that a sword?  Henry’s knight is in the background and approaches Irving.  Irving’s eyes are black!  When Irving comes out of his dream the bible is burning.  When Henry pays a visit, Irving confronts him about not revealing himself.  Henry threatens to cut Irving off from his family as well as the monetary support they are receiving.  Irving then remembered getting pricked right before he signed papers from Henry.  Henry tells him to read Ezekiel 18:4.  Once Irving reads that passage it clicks for him that he signed away his soul.  I hope he tells Abbie and Ichabod sooner rather than later.  Here’s hoping there is a loophole for that! 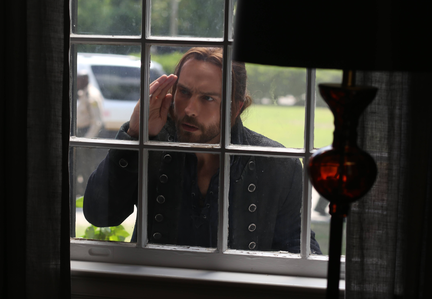 Another great episode Sleepyheads!  While I missed Jenny and Katrina, it was nice to see Ichabod and Abbie continue to bond by solving their own case like last season.  I’m also enjoying seeing Henry’s nefarious plans being slowly revealed.  We see the weeping lady next week!

So what did you think of the episode? If Abbie and Ichabod created a band, what would their name be?  Sound off in the comments below.