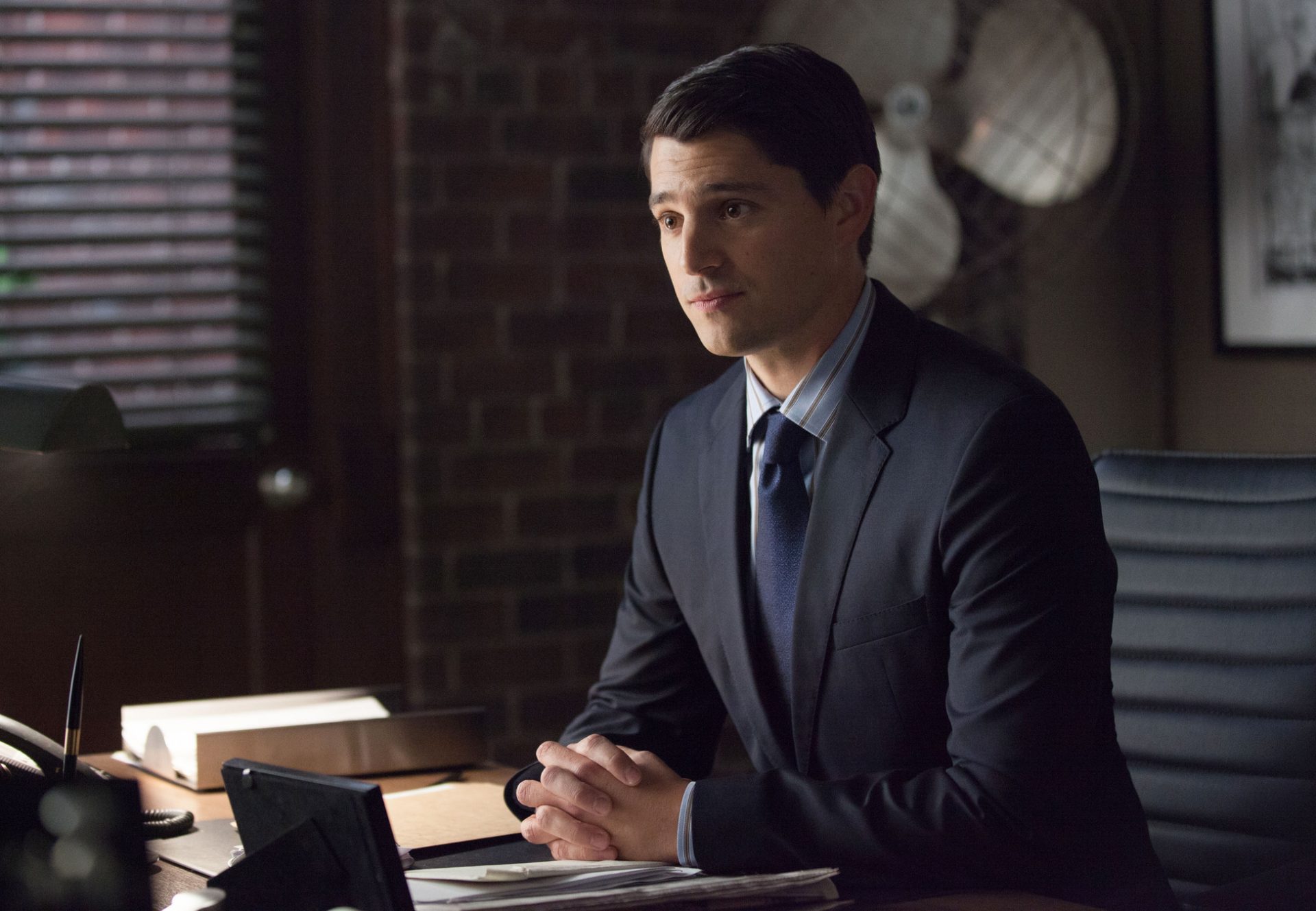 The episode starts out where the last one ended off – Selina Kyle returning to Gordon and we have the introduction of Harvey Dent.

Gordon takes Cat (Selina Kyle) to Barbara’s penthouse and he discovers the letter that she left him. Gordon explains that Cat is going to Wayne Manor to stay and will speak to a sketch artist to identify the Wayne’s killers. Gordon gets the sketch to Bruce Wayne and it’s a face that he doesn’t recognize (I’m unfamiliar with the face myself.) Gordon explains that he wants Cat to stay at Wayne Manor so she can stay safe from the corruption in Gotham. Alfred argues against her staying, but Bruce interjects, since he’s determined to find out who killed his parents. Gordon explains to Alfred that he is meeting with ADA Harvey Dent so they can prosecute the murderer. Bruce meets Cat for the first time and is a bit smitten, it appears.

We see the GCPD transport a prisoner from Blackgate Prison – Ian Hargrove, a bombmaker who can apparently make a bomb out of anything! During transport, thugs under a Russian crime family kidnap Hargrove for their own uses.

We see the first appearance of Harvey Dent, who is the Assistant District Attorney, with his classic two headed coin. Gordon and Dent speak about Lovecraft – who Dent thinks was responsible for the Wayne murders. He explains his plan that he will plant information about a witness who saw the Wayne murders allowing for people to get nervous and spill their guarded secrets. Dent explains he wants to make the city a better place and Gordon agrees to work with him. Back at the precinct, Bullock brings in Hargove’s brother who they ask for information. Ian’s brother, John, explains that Ian has mental problems since he was a child and was never treated. John explains that Ian isn’t a bad man, he is just sick. 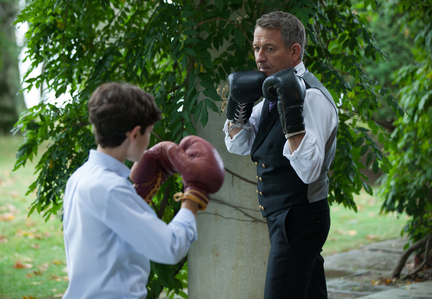 Back at the Wayne Manor, we see Alfred teaching Bruce how to box, Alfred explains that taking a punch is just as important as throwing one. Cat chastises Bruce for learning how to fight, explaining that not everyone in Gotham fights with gloves on.  Bruce asks Cat a bunch of questions and she in returns asks him why he isn’t in school and they talk about their parents as well. Alfred calls Gordon and explains that he doesn’t want Cat there because he has a bad influence on Bruce, Gordon promises that he will pick her up soon.

We see the Penguin enter Liza’s apartment searching for clues – eventually he figures out she is a mole for Fish Mooney who is spying on Falcone. The Penguin has a surprise visit with Mooney – fishing for information and he solidifies his deduction that Liza is working for Mooney. He gives her a chance to fess, but she declines.

At the Gotham Munitions Factory, we see one of the Russian mafia deliver a bomb that Ian made to the guards so they can be disposed. As the bomb goes off, we see Ian look at the explosion in horror. They steal some other explosives for another heist while Bullock and Gordon are trying to find their next target. Nigma finds a nameplate which leads the duo to a factory where Hargrove is working. Hargrove is back at it building a bomb for his kidnappers when Bullock and Gordon come upon and a gunfight ensues. They escape unharmed however, they lose Hargrove in the process.

Cat speaks to Bruce about her mother, and Bruce asks about the night that his parents were killed. He explains he didn’t do anything to stop it – Cat reassures him that there was nothing he could had done. Cat asks him if he’s ever kissed a girl and Alfred saves the day by telling him its study time for Bruce.

The Mayor is down at GCPD while Gordon explains how the Mayor messed up this whole situation with Blackgate and Arkham Asylum. Hargrove’s brother’s family is placed in protective custody. At Dent’s office we see Lovecraft and Dent talking and Dent explains to Lovecraft that he knows that he killed the Waynes. After Lovecraft threatens Dent, we see his two-facedness as he has a violent outburst.

Gordon and Bullock find out who Hargrove is working for, the Russians – Fish Mooney explains to the Russians that they are after Falcone’s money. Mooney gives them a truck to steal from Falcone.

We see Bruce testing himself again by seeing how long he can hold his breathe underwater. Cat teases him again explaining that won’t help him in Gotham. Back at the lab, Nigma discovers what the bomb is for – it’s a bomb designed to puncture iron. Gordon says that the Gotham Armory uses Iron vaults still and we see Hargrove and the Russians blow the vault door right off. The Russians drool at the sign of all the money and start loading it into the truck when Bullock and Gordon show up causing a mexican standoff. Mooney’s right hand man blows up the truck with a cell phone bomb – doing what Mooney intended all along, to hurt Falcone. 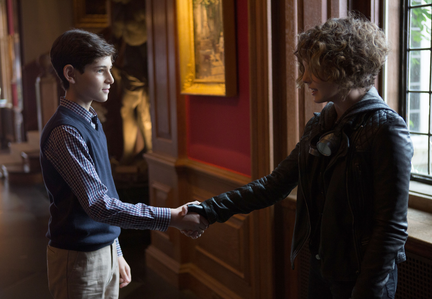 Bruce and Cat are sitting and eating when she challenges Bruce to a food fight and the reward for hitting her is a kiss! They engage playfully while Alfred almost stops it only to let it continue because Bruce is finally having some fun. Gordon calls Alfred and he agrees to keep her for a bit longer because it has a benefit on Bruce.

Liza walks into her apartment only to discover that the Penguin is sitting there waiting for her. The Penguin explains he knows that she is working for Fish Mooney and threatens to tell Falcone – Liza stops him and he tells her that she is safe as long as she works as a double agent for him.

Dent meets with Gordon at the precinct and explains that he has Lovecraft on the ropes – Bullock walks in and explains that under the Mayor’s orders all of the criminally insane are being moved to Arkham. Gordon protests and Bullock welcomes him to Gotham.

Fish’s right hand man reports back – Fish is ecstatic that she hurt Falcone so much regardless of the loss of money. The mayor appears on TV explaining that he is turning Arkham into an asylum for all the criminally insane.

The episode ends with Gordon calling Barbara explaining that he needs her and that he isn’t anything without her, as we see Barbara lying in bed, Montoya crawls on top of her.

This episode feels like more of a filler ep with not much going on as those in the past. I thought Harvey Dent would have a bigger role to play in the episode but he only appeared a few times. Arkham becoming Arkham Asylum is a big deal – we should see more crazies popping up in Gotham soon.

How to Get Away with Murder Recap Ep 8: Of Course He has a Wife!