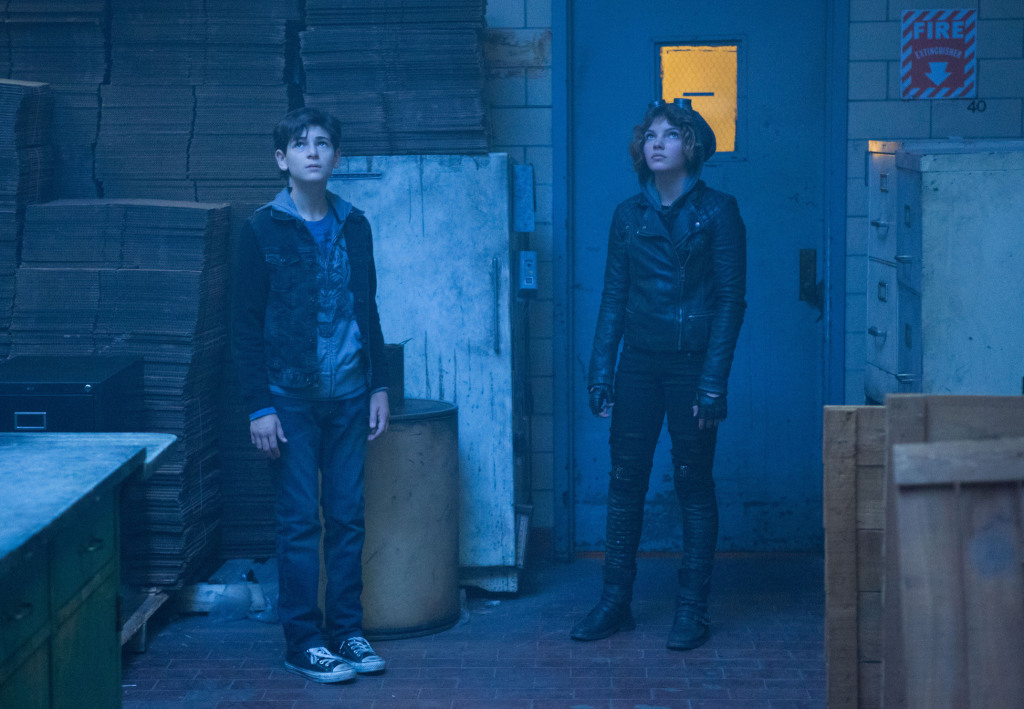 Alfred is more than just a butler in the winter finale of Gotham! It was also nice to see Spartacus alum Leslie Ann Brandt as assassin Larissa Diaz who goes after Selina and Bruce!

We start the episode at Wayne Manor.  A gardener gets killed by Diaz when he sees her lurking around the grounds.  Selina aka Cat teaches Bruce to use his core while trying to balance on the hallway banister.  After the lesson Selina gives Bruce advice like stop trying to figure out why his parents were murdered.  She offers to take Bruce to a bridge to further test himself and asks if he wants to kiss her.  Bruce pragmatically says yes but he does feel like she has ulterior motives.  He even psychoanalyzes her by saying she just looks out for herself but still thinks she’s a good person.  Selina acts affronted and reneges on taking him to the bridge.

Diaz gets Alfred to open the door when she fakes that she was in a car accident and needs assistance.  Once she sees Selina, who came downstairs with Bruce, Diaz with two other assassins try to kill her but Alfred holds them off by telling Bruce to run. I enjoyed the stunt choreography in those scenes and Sean Pertwee was awesome! The kids make it outside of the house but Bruce doesn’t want to leave Alfred.  He reluctantly follows Selina after she runs without him.

Alfred starts telling Detective Gordon what the assassins looked like when Detective Bullock comes in the room wondering why the dead assassin had a picture of Selina on him.  Gordon finally reveals to his partner about Selina witnessing who killed the Waynes and that he was working with Harvey Dent (Nicholas D’Agosto) from the D.A’s office to look further into the murder.  Dent leaked he had a witness to Dick Lovecraft (Al Sapienza) to see if he may divulge his involvement with the killings.  Bullock and Gordon start arguing about how bad that plan since someone found Selina at Wayne Manor. Bullock also feels there should be no further investigation about the Wayne’s murder.  Alfred is more concerned about finding Bruce.  Gordon thinks Selina will try to hide in Gotham if they are not found in the woods. It is decided that Gordon will try to convince Lovecraft to call off the assassins while Bullock searches for Selina. Alfred goes with Bullock.

Falcone questions Oswald about the robbery from last week.  Penguin maintains he had no knowledge of it and doesn’t think Maroni was behind it.  Just then Liza walks in with Falcone’s tea but leaves when she sees him talking with Cobblepot.  Oswald suggests to Falcone that there is a mole and whoever that person is would be revealed to be working with Fish.  Falcone for some reason thinks that Fish is innocent.  Cobblepot offers to find the mole for Falcone.   When he leaves one of his henchman wonders why he didn’t out Liza.  Oswald thinks Liza will reveal herself on her own and timing is everything. 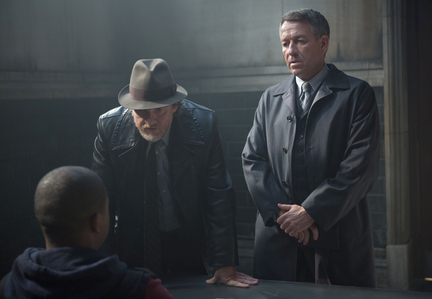 Gordon confronts Dent about revealing his name in the investigation to a few sources.  Dent admits to messing up but still thinks it’s a win because Lovecraft is scrambling. When Gordon mentions that Lovecraft appears to have gone underground Dent gives him an address of one of Lovecraft’s mistresses.  Bullock questions Macky (Kyle Massey)  to find out where Selina hides.  He tells them to ask Fish since Selina would have gone to her contact or “fence”. Alfred gave him $100 bucks for his trouble.  Back at Falcone’s right before dinner we see Falcone kill one of his associates who was supposed to guard his money in front of his guests.  He wants everyone to build up the money reserves again by increasing their tariff by 25%.  Two of his associates complain that it’s high but Mooney thinks that it’s fine when Falcone asks her.  He also warns everyone that he will find out if anyone else was involved with the robbery.  Mooney looks nervous as dinner is being served. 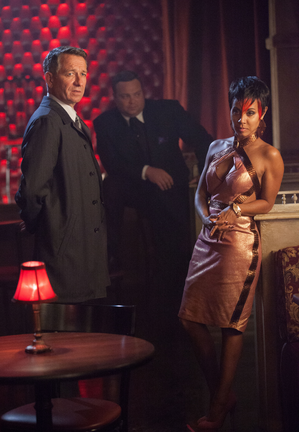 Butch is even more anxious than Mooney but she tells him to stick to the plan.  She wants him to still approach the two guys that were upset about their taxes being raised.  Bullock and Alfred come in asking to speak with Mooney to see if any of her “fences” have seen Cat.  Butch tries to tell them that she’s busy but Alfred knocks him down.   Mooney comes out and initially tells Bullock no.  When Alfred tells her that Bruce Wayne is with Cat Mooney still hesitates. She relents when Alfred pleads with her to use compassion and kindness.  She wants him to remember her kindness as she makes some calls.

Gordon finds Lovecraft in his mistress’ apartment.  Lovecraft is adamant that someone is after him too so he wouldn’t have ordered the hit on Selina.  He foreshadows that there are even more powerful people that rule this city that Gordon doesn’t even know about.  Lovecraft starts showing Gordon some files showing his cut of the movement of Wayne stock like someone knew the murder was going to happen.  Gordon hears a noise. It’s Larissa and another assassin! She tries to talk Gordon into letting her go after Lovecraft but Gordon fights back.  She winds up knocking out Gordon with a sleeper hold.  When Gordon wakes up the assassins are gone.  Bullock calls him to let him know that Fish told them where Cat’s “fence” Clyde (Devin Harjes) is located, which is a Factory by the Narrows. After Gordon hangs up, he finds Lovecraft dead in the tub.  He notices his revolver on the floor.  Uh oh, looks like a set up! He calls it in.

The Adventures of Cat and Bruce aka “B”

Selina and Bruce head to Gotham. She lies and says that the assassins were after him not her.  Bruce is still concerned about Alfred and wants to try to contact him. Selina compromises and tells him she will find a phone once they are hidden in the city.

Later in the streets of Gotham, Bruce finds a payphone and almost calls Alfred.  Selina tries to get Bruce to go back home and admits that she lied about the killers being  after him so they could hang out longer.  Bruce wants Selina to continue staying at Wayne Manor until she can testify.  Selina thinks it’s better to disappear and goes to the roof of a building. Bruce goes after her.  She jumps in between buildings thinking Bruce won’t go after her.  Bruce feels he has to prove himself so he jumps too but barely makes it.  Selina has to pull him back from the ledge.  She lets him stay with her on the condition that he follows her rules. 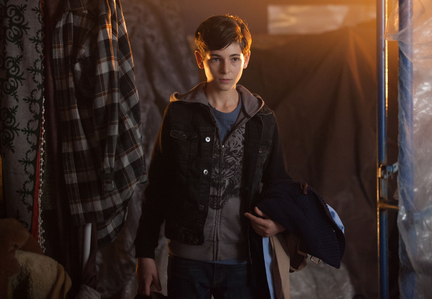 Selina takes “B” to a place called “The Flea.” It’s a hangout for street kids like her. She thinks they will be safe there until dark. Bruce changes clothes so he can blend in.  They run into Ivy, and Bruce reveals himself when he recognizes the name, to Selina’s chagrin. For the time being Ivy doesn’t hold Bruce responsible for what happened to her parents. Ivy then asks how does she look.  Bruce politely says that she looks good.  Selina cuts the conversation short and walks away with Bruce so they can talk to Clyde.

They arrive at the Factory and Selina gives Clyde stolen items from Bruce Manor to price. Cat gets irritated when Clyde low balls the worth of the items. Bruce also gets mad and tells Clyde the worth of one of the stolen items, a watch.  Clyde has had enough and has his goons hold Cat and Bruce.  He mentions that there are people that want to meet Selina. We can take a wild guess who they are. The goons lock the kids in a storage room.  Both Cat and Bruce start working together by moving objects that can help them get to the skylight. The assassins arrive and the kids hear them coming.  Selina knocks out one of them and they try to escape the way they came.  Alfred and Bullock then appear and we see Alfred charge in guns blazing calling Bruce’s name. Gordon arrives minutes later and the partners go into the warehouse to also search for the kids.  Gordon shoots  a henchman that was about to kill Bullock. The kids hide but then Bruce goes in another direction to lead the bad guys away from Cat.  Larissa catches up with Bruce, points a gun at him, and demands where is Cat. Bruce sees Cat escape from one of the windows.  He tells the truth when he says that she’s gone.  Larissa let’s Bruce go and disappears just as Alfred sees him.  They have a heartfelt reunion.  Gordon is happy to see Bruce as he’s arresting one of the henchman.

Selina sneaks back into the Manor. Her excuse was they didn’t say goodbye. She also returns the majority of the items she stole, especially the watch. She gives Bruce his first kiss, then disappears through the window just as Alfred comes in.  He closes the window and hints he knows Cat was there by remarking on how quiet it is now that she’s not there to which Bruce agrees. Alfred takes the bag with the stolen items from Bruce. Awww Bruce isn’t kissing and telling! 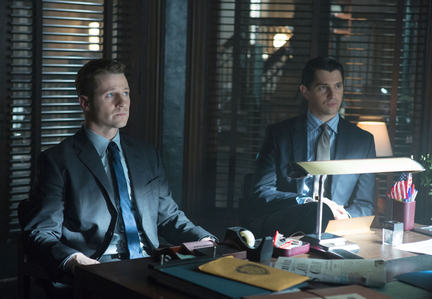 Mayor James chews out Gordon and Dent in his office about what happened to Lovecraft.  He’s wondering how he is trying to spin his death.  Gordon of course wants to spin the truth instead of Lovecraft appearing to be a good citizen.  The mayor suggests suicide by Gordon’s gun instead. The mayor wants to get rid of both Dent and Gordon but he can’t do that. So he wants Gordon to take the fall. Gordon appears to have the last word by telling the mayor where he can kiss him. I’m surprised the Captain was not in this scene.  Jim gets reassigned as a security guard for Arkham Asylum, the mental hospital for the criminally insane.  Bullock offers to buy him a drink sometime and they shake hands.  Edward Ngyma also says goodbye by giving him a hug and is sad that he’s leaving.  Gordon leaves with his personal items and the episode ends with Gordon arriving at Arkham.

What did you think of the winter finale? Did you like the Bruce and Cat centric episode? What are your thoughts about the show showing Bruce at least once in every episode so far? Sound off below in the comments!  We will see you back with the Gotham recaps when the show comes back on January 5th!