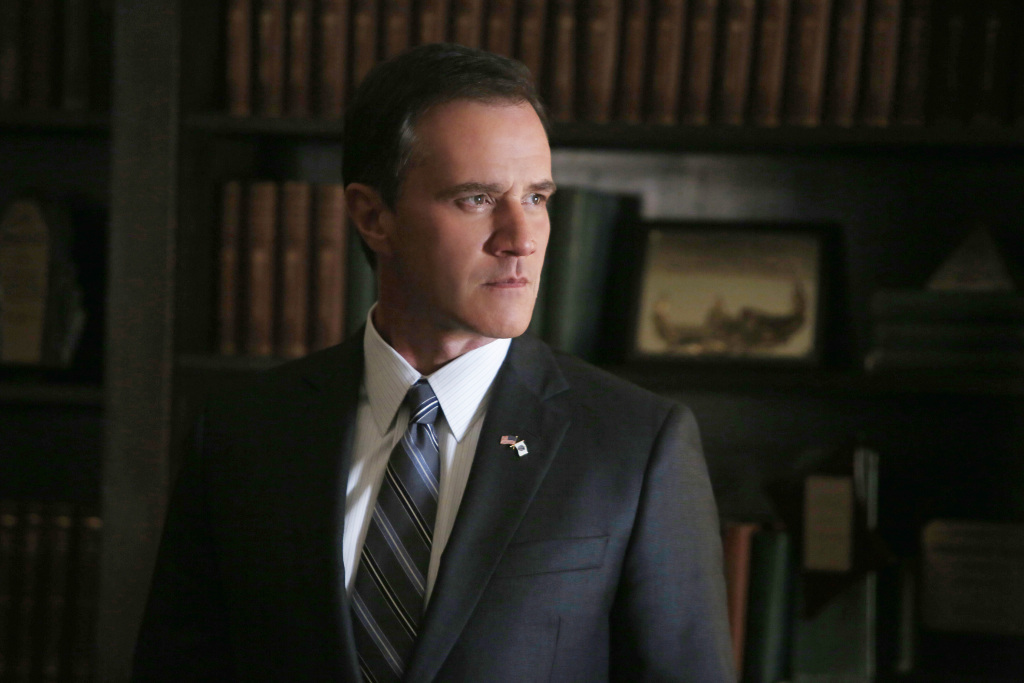 The Ward brothers Grant and Christopher (Tim DeKay) play a mental game with Skye and Coulson in the episode, “Fractured House.”

We start the episode with the United Nations (UN) having a meeting to discuss whether S.H.I.E.L.D is dangerous.  General Glenn Talbot (Adrian Pasdar) is speaks out against the organization.  Just when General Talbot is warmed up, Hydra soldiers impersonating S.H.I.E.L.D agents start killing several people in the room by throwing mini-disks that when it hits the person turns them into dust.  I guess they weaponized the effects of the obelisk. Marcus Scarlotti (Falk Hentschel) is leading the charge and almost hits General Talbot with the mini-disk.

Ward wakes up every morning at the same time every day to do exercises. Skye watches on video monitors when Simmons walks in.  Simmons had monitored Ward both before she left and lately since she’s back. Skye is glad that Simmons is back in one piece. Simmons warns Skye to be careful around Ward. She reassures Simmons that she is being leery.

Alarms go off and May rushes in to tell them about the UN attack. Coulson tells Skye and Tripp that it was Hydra. Coulson figures that Whitehall wants the world to focus on S.H.I.E.L.D. while Hydra manipulates behind the scenes.  Coulson asks both of them to scan government channels to see what they are dealing with.  The alien writing will have to wait.  I thought it was cute that Coulson noted the Grumpy mug when he’s trying to get coffee.

Simmons recognizes the weapons used in the attack. The weapons were created by Toshiro Mori (Brian Tee), a demolitions expert. Bobbi Morse knows him.  Coulson assigns Bobbi to go to Okinawa to see him and get info about the next attack. May is leading the mission and she brings Hunter along.  Coulson tells Simmons to dig into the hard drive from Hydra’s lab to find out about the weapons. Hunter and Bobbi are initially hesitant about working with each other.

Talbot, with one of his arms in a sling meets with Senator Christopher Ward.  He thought Talbot had S.H.I.E.L.D under control and now the press is going to eat this up.  Talbot actually admits that S.H.I.E.L.D may not have been behind the attack.  He thinks that Ward is more concerned about the press finding out about his brother.  Ward wants to shut S.H.I.E.L.D down for good.  He announces in a news interview plans to propose a multi-national police force that targets those suspected of ties with S.H.I.E.L.D.  Julien Beckers the Minister of Foreign Affairs for Belgium is also participating in the interview doesn’t agree with the proposal. More on Beckers later.

Coulson shows Skye the operations around the world.  Coulson will try to prevent a witch-hunt from happening since S.H.I.E.L.D has just started rebuilding. Skye offers to talk with Ward to get more info about his brother.  Coulson reminds her to have Ward focus on his family, not hers. He calls Agent Walter from the Netherlands and tells her to go dark, contact him in 24 hrs, and seek refuge.

Morse and Hunter have an awkward conversation on the plane.  Hunter denies calling Bobbi a hellbeast.  Before they start to really argue, Bobbi goes up front with May, who’s piloting the plane.  They agree that talking to exes is a bad idea.

Simmons asks Fitz to help her restore the hard drive so they can get more information about Hydra’s weapons from the attacks.  Fitz notices Simmons looks different.  Things get awkward when she tries to finish Fitz’s sentences but it’s not what he wants to say.  She looks discouraged.

Skye questions Ward about his older brother the senator.  He warns her not to send him to Chris because he’s cruel and has an angle.  He reminds her about the well incident. Even though he says that he tells her the truth, Skye doesn’t believe him. Ward tries to bring up Skye’s dad and she slips slightly.  Coulson stops the conversation and tells Skye she needs to focus. 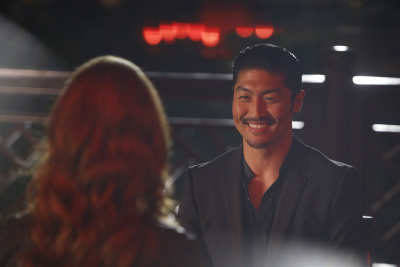 The threesome of May, Morse, and Hunter land in Okinawa.  May knows that he has the weapons from the UN attack.  May prefers a firefight where they can surprise him before the heavy artillery is brought in.  Bobbi prefers to take the chance to talk with Toshiro even if her Hydra cover has already been blown.  She thinks she can get him to brag about the attacks to her. Hunter puts his foot in his mouth when he mentions that Bobbi’s good at deception.  You have to wonder if he was throwing shade.  He makes up for it by telling her not to die. Awww he does care! May says that if there’s any sign of trouble that they will get her out.

May and Hunter have the tech set up so they can hear and see the conversation as well as get any texts or notices from cellphones. Bobbi gets patted down, then greets Toshiro with a kiss. She even speaks Japanese! I love this woman! While Bobbi talks with Toshiro over tea, Hunter makes funny commentary with May.

Toshiro brings up the rumor that Bobbi is working for S.H.I.E.L.D and she counters aren’t they all by bringing up Scarlotti’s attack. Toshiro is pleased that she recognized he made the weapons. He calls them splinter bombs.  He tells her he can’t take all of the credit as Dr. Whitehall gave him a design months ago.  He even mentions the obelisk aka the Diviner. Now S.H.I.E.L.D knows Hydra has it. He no longer has the bombs as he already sent them away.  Hunter is able to intercept a message that is a hit on Bobbi! He goes in to help her but not before Toshiro also spills that Scarlotti’s team is headed to Beckers (yep that Foreign minister guy from earlier) to eliminate S.H.I.E.L.D agents.  Toshiro Mori was a waterfall of intel wasn’t he?  Shots are fired Toshiro gets flipped over with a scarf then shot by both Hunter and Bobbi when they break into an argument about him saving her life and her thinking he’s peacocking.  May has to stop them with a “Really?”

May thinks that Scarlotti’s team are going to kill Beckers so the UN will take Senator Ward’s proposal seriously since the country is neutral and the team heads to Belgium. Back at headquarters the hard drive is restored but Simmons can’t find anything new.  She goes over to Fitz who’s looking at the backlog files.  It looks like he’s on to something but Simmons tries to figure out what he’s saying but it’s not working again. Fitz gets upset. Now we are starting to get to the heart of it.  Fitz admits that he feels like she gave up on him and wants to know why she left. He mentions she told him she was visiting her parents but she went undercover and she could’ve been killed. Simmons wants to try and treat him the same but Fitz says he’s different but he doesn’t want to.  Simmons is like I can’t do this and walks away. Mack walks in just as she leaves. 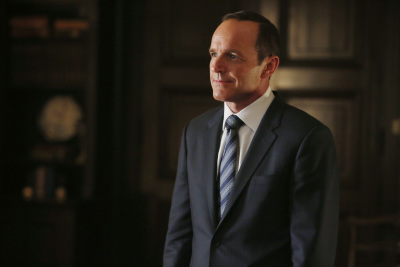 Senator Ward comes back into his office to find Coulson waiting for him. He tries to call security but Coulson tells him he won’t be bothered for an hour because his security believes he’s requested “me” time! Coulson tries to clear the air about the attack. Senator Ward doesn’t want to hear it.  He feels like Coulson can’t bring anything to the table. The senator seems surprised when Coulson mentions his brother was a Hydra agent. He looks even more floored when Coulson say’s “I have your brother in my basement.”

Skye and Coulson butter up the Ward brothers for information. Chris Ward claims that his brother has told similar lies about Chris forcing Grant to be cruel to their younger brother Thomas. Grant Ward tells Skye that Chris is a master manipulator and that he’s worse than him. Chris warns Coulson that Grant always finds someone to believe his lies.  He mentions an incident with a screwdriver and Grant lied to their parents about him forcing Grant to do it.  It appears as though Grant is trying to salvage any credibility he has by reiterating the times he’s told the truth to Skye.  She appears to fall for it by wanting to know all about her Dad. Grant tells her that Hydra agents killed her mom and her Dad went crazy.  Skye’s dad wants his family back and Grant offers to help by…wait for it….letting him go. “We can find him together.” He has connections. Looking all smug, that quickly changed when she drops the bomb that he’s being released to his brother! Skye pulled a Black Widow move!

Coulson tells May that in exchange for his brother Senator Ward will back down on his proposal. May lets Coulson know they are on their way to Belgium.  Simmons sees Mack and Fitz talking.  It’s a good thing Fitz was looking at the backlog files. They find that a scientist created some Hydra’s weapons back in the day.  The last name of the scientist is Beckers.  Yep that foreign minister is the grandson of the scientist so he’s Hydra! 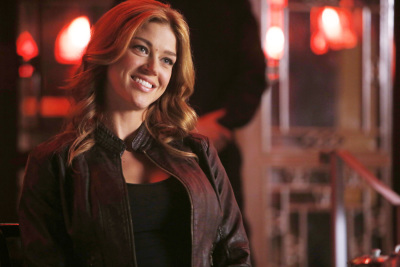 Grant Ward talks with Coulson.  Coulson thinks he’s more like his brother than he’s willing to admit. Tripp interrupts Coulson so Simmons can tell him about Beckers.  Coulson realizes that S.H.I.E.L.D got played. He tries to warn May but it’s too late for Walters and her team. May, Hunter and Bobbi still go to the house where Walters was staying. Hunter initially distracts Scarlotti and his team until May and Bobbi can crash through windows and start fighting! May takes on Scarlotti while Hunter and Bobbi knock out the other henchman. Bobbi’s life is saved twice by Hunter when someone tries to take her out from behind.  It was nice to see Bobbi acknowledge it. These fight scenes are the best! May was able to defeat Scarlotti in her usual butt kicking fashion.

Simmons has a talk with Mack who sticks up for Fitz.  Mack feels like she makes things worse for Fitz. She says “Why do you think I left?” I don’t know what to think about that. I just need that #FitzSimmons mojo back! Bobbi and Hunter admit to each other that they are trying to figure out where they fit in.  Bobbi mentions that if he wants to stay with S.H.I.E.L.D. he can.  Senator Ward makes a speech admitting that his brother was a Hydra Agent. During his speech, he acknowledges Hydra is a problem, and we see a montage of things going on.  Ward takes the walk of shame to get transferred.  Simmons threatens to kill him if she sees him again. General Talbot arrives in Belgium to take away Scarlotti and his cronies. Talbot shakes May’s hand and tells her it’s hard to lose soldiers when she told him how many agents were killed.  Ward is on his way to his brother when he escapes!  We see a guy enter a tattoo parlor, who then takes off his shirt and we see he has similar markings to what Coulson has been drawing? What’s up with that?

What did you think of the episode? Was that Age of Ultron Trailer that aired afterwards awesome or what! Sound off below in the comments!

Why I Am Excited About Comikaze 2014

How to Get Away with Murder Ep 4 Recap