My overall impression of the DC Universe Rebirth initiative has been quite positive. The bargain-priced $2.99 DC Universe: Rebirth began the DC Comics branding refresh effort. Geoff Johns and Ethan Van Sciver gave us a preview of the publisher’s intent to reinvigorate the DCU by reintroducing legacies that existed prior to the New 52 reboot back in 2011. It is fair to say that the relaunch met with some criticism. The heart of the DC Universe was excised in favor of focusing on purging ‘restrictive’ continuity and changing the ages of most characters to a more youthful state.

This week continues the Rebirth effort with the reintroduction of 4 properties. For your convenience, you will find reviews for each issue here on The Nerd Element:

While Johns and Van Sciver’s launch from last week refreshed my optimism for the DCU, this week’s Green Lanterns: Rebirth (with the addition of co-artist, Ed Benes) delivers the first failure of the Rebirth initiative. 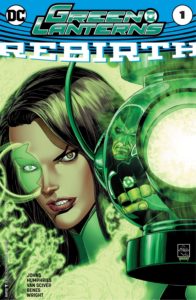 The New 52 Green Lantern title is one of the few titles that launched with a soft reboot. Batman also received the same consideration (Batman: Rebirth 1 ) and this kinship of continuity continues with their respective Rebirth books. Green Lantern’s first New 52 issue continued where the pre Flashpoint (the end of the ‘old’ DCU) left off. While all 5 of the Rebirth books reference their New 52 ties, Green Lanterns is steeped in requirements for the reader to be up to date with the Green Lantern New 52 Universe.

As one of the numerous ‘lapsed readers,’ I did not read anything beyond the first few issues of the 2011 Green Lantern comics. Green Lanterns: Rebirth is not new-user friendly and as a result, I begin the reading experience with absolutely no investment in the title’s main characters. Jessica Cruz and Simon Baz are new recruits to the Green Lantern Corps and they have a lot to learn.

On the topic of a lot to learn, one would expect that DC Comics would treat the Rebirth books as an opportunity to regain lost readership through a variety conceits, chief of which should be accessibility. One of Rebirth’s chief objectives is to reintroduce the Humanity that was jettisoned with the New 52 relaunch. Humanity enriches characterization, thereby leveraging a symbiotic emotional investment between the reader and DC Comics. Green Lanterns: Rebirth 1 offers a conflicting approach and the consequences are destructive.

Introduction of an Impending Threat 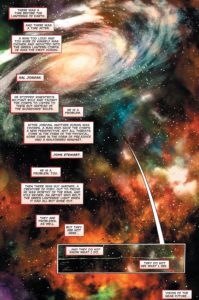 An unnamed Guardian (the architects and ruling body of the Green Lantern Corps and all derivatives) is being aggressively pursued by a hunting party of aliens called ‘Dominators.’ The Guardian possesses a boxed item that he’s racing to transport to Earth. The Dominators are almost upon him and in a panic he opens the box. ‘The New Power’ is released.

We see what appears to be a Green Lantern symbol comprised of a host of different colored light. This harkens back to Johns’ original concept of the Emotional Spectrum, first introduced to Green Lantern canon more than a decade ago. The different colors represent specific Corps identifiers linking color to power source.

Green Lanterns derive their abilities from Willpower while 6 other color variations are fueled by varied sources. Is this the Rebirth of the Emotional Spectrum concept? Is Earth set to ‘experience the rainbow?’ For now it’s all setup so we’ll have to wait and see until the Cosmic Parcel Division of USPS delivers our package. I wonder if it’s insured and comes with signature confirmation?

Introductions Are In Order 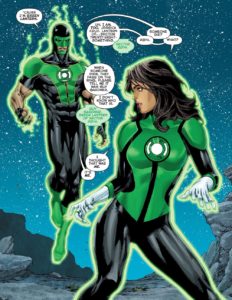 New Green Lantern Corps recruits Simon Baz and Jessica Cruz each carry a lot of emotional baggage. On the surface, Willpower is not necessarily the first character trait that I would assign them. Johns and Humprhries are clearly aware of this and take care to offer counter observations from supporting cast. Third Party commentary asserts that both Baz and Cruz actually exemplify Willpower through their actions.

Once a page or two of dialogue-fueled exposition takes place for each party, they receive an urgent summons to face an imminent threat to Earth. Maybe the Guardian selected USPS First-Class to expedite the Rainbow arrival date? If it’s Payment on Delivery, somebody is going to go Red Lantern. I hope the package is insured… 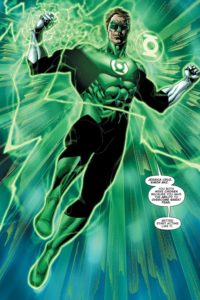 Our new recruits arrive on the scene and more clumsy exposition takes place as they measure up one another. Baz is beginning to show some depth of character by making sarcastically disparaging remarks about fellow Corps member, Guy Gardner. Introductions are cut short as the threat makes itself known. The villain turns out to be a Manhunter; the Guardians first policing agency for the Universe. They went bad and now endeavor to beat up members of the Corps as often and ferociously as possible.

Baz and Cruz both fumble in their attacking methodology and quickly succumb to the Manhunter’s strategic prowess. It’s here we learn that it’s not a villain at all! It’s just Earth’s chief Green Lantern Corps and Justice League founder, Hal Jordan. He’s critical of the new recruits performance and demands them to incorporate his call to action.

More Reference To A Great Threat Against Earth

Jordan explains that he’s off to fight a Yellow Lantern named Sinestro. In the meanwhile, Earth has exceeded its allotment of Corps members. The reasoning for expanding the recruiting effort assumes that a significant threat looms. Without Jordan’s tutelage, the two will need to commit themselves to an intense training regimen. Baz and Cruz are bonded when Jordan fuses their individual power sources into one recharging unit. They will need to act in tandem, effectively forcing a gestalt. They will need to work together in order for them to ‘power up.’

Before abandonment issues can take hold, Jordan assures them that they’ll be in good hands. A splash page introduces us to The Justice League. None of the League looks at all friendly in their acceptance of responsibilities, other than The Flash. Hal Jordan rockets off to face the threat of Sinestro and by default, abandons his fresh recruits.

The issue ends with an appearance by the leader of the Red Lanterns and several of his minions. He is Atrocitus, keeper of the Rage. He is the one that supplied the expos…er, narration that accompanied the plight of the Guardian at the start of the book. The Red Lanterns are the threat against Earth and Johns and Humphries let us know with he subtle inclusion of a capitalized sub-title announcing the coming of THE RED DAWN.

The New Recruits are Dismissible

I have no history with Cruz or Baz and their impending trials and tribulations are not of concern to me. There is little opportunity for an emotional investment in either new recruit. Jordan expedites a battle that they can’t possibly win and then delegates his responsibility to the Babysitters. Admittedly, the League offers diverse training opportunities but what about this huge threat approaching Earth? Jordan is the only one that needs to expedite the battle yet the rest of the League has the time to equip the recruits for battle?

Jordan’s interaction with Baz and Cruz is not emotionally satisfying. The ‘open arms’ of the Justice League does not exist on the page. Each of the recruits is not fully accepting of their recruitment into the Corps. The threat against Earth is vague and once again, I’m not vested in any of the heroes that are going to protect our world.

Johns and Humphries don’t provide the warm welcome that Rebirth needs to offer new readers. Of all the Rebirth issues, this is the only one that falters to the point of failure. On paper, Benes and Van Sciver would seem a great pairing for supplying great visuals. Much of the artwork is detailed and impressive in scope, however, some pages and panels receive less attention and look rushed.