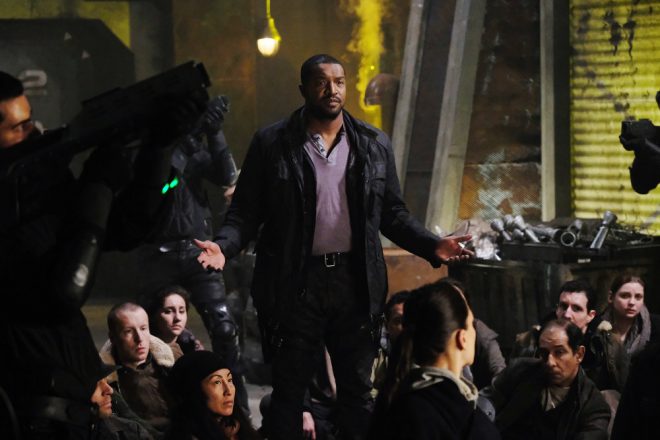 I have a twofer for you in reviews for both the 3rd and 4th episodes of the third season of Dark Matter! Dark Matter has had some serious moments in “Welcome to the Revolution” to some hilarious light-hearted moments in “All the Time of the World.”  However, what the hell was that ending all about?

Welcome to the Revolution

What I liked about this episode was how Six’s past came full circle.  The General (Andrew Jackson) escaped Six’s clutches before in the first season by being a clone.  I was so glad when Six shot the General right between the eyes!  This episode reminded me of the series premiere where the Raza decided to help another colony gain independence.  Since there is chaos among the corporations at war, colony workers across the galaxy are starting to get understandably antsy.

What puzzled me was why the Traugott security team was so confident the company was sending backup?  Was the loyalty so ingrained that they wanted to uphold the company’s mission even though their employer has more pressing matters like the corporate war? It makes me wonder if the General had not created a conflict, if a more peaceful solution would have presented itself.  That is probably one reason why the leader before he was killed understood Six’s point.

There were several comments on Twitter on how the guy that was helping the General looked like Chris Pratt with darker hair.  From a distance, I agree.  It took me a few seconds to remember it’s not him every time he appeared on screen!

Six had his moment to shine in saving people other than the crew of the Raza.  He also wanted to make up for when he was undercover with the General.  I agreed with Six that the General was taking advantage, he was the reason there was an escalation of conflict between the Traugott security and the workers in the first place.  I just wish that we saw Six’s progress instead of having it off-screen.  I will miss Roger Cross on my screen every week!

Two’s stance on not helping the workers was surprising.  However, I still loved the push and pull between Six and Two.  The fact that they were brought there under false circumstances I think played into Two’s decision to not get involved.  I appreciated Two’s decision to not leave Six hanging when the situation got worse.  That’s one of the many things I loved about the crew, until Ryo’s situation at least.  They still have your back even when the decision you made was bad.  I love it when they surround the “bad guy” when one of their own is in trouble.

Solara’s intro into the show was like how Nyx (Melanie Liburd) was introduced. They both took an instant dislike to Three (Anthony Lemke).  I don’t know why but I feel a kinship with anyone that has an initial feeling of “ugh” when it comes to Three because I couldn’t stand him at first.  More on him later because of how much I changed my tune.

On Zairon, Ryo sent Misaki (Ellen Wong) away, still pissed at her for killing Nyx.  Even though he is still angry, Ryo trusts her with his generals.  She could be staging a coo but like Teku (Andrew Moodie) told his king, she is loyal to him even if she’s contrary to how Teku wants Ryo to rule.  Ryo is also aware of the animosity between the two. I wonder if he will encourage the discord at all?

The blink drive may be beyond repair according to Android.  Ryo is salty not only about the research facility, but also that the blink drive is out of his reach.  He blames the crew of the Raza but can he really?  Ryo was the one that decided to try to use the drive for the whole research station to escape despite the warning of his scientists about it not being a good idea!  As King he took that risk and it was the wrong decision.  Dude, the blink drive should not have been stolen in the first place!

Now Ryo has hired bounty hunters,  Six better be safe since he is no longer on the ship.  I hope Ryo has another research facility to use because he is at a disadvantage without the blink tech.  Why couldn’t he have hired the Raza to help him with his war instead, darn it?  Nyx would still be alive for the time being if he had not stolen the drive.  Hindsight, right?

By the end of this episode I was leery of Adrian.  He seems annoying.  Like a weasel taking advantage of the good graces of the crew.   I appreciated how Two, Three, and Android treat Five like she can handle herself.  To the point where Two has Five watch over the new members.  Five is growing up y’all! *Sniff*

This was a solid episode despite being initially upset that Six stayed at the colony.

All the Time in the World Review

I’m starting to realize that my favorite episodes of Dark Matter feature Three.  Anthony Lemke just seems born for this role.  There was humor, throwbacks to classics scenes, and intrigue as to what the heck is going to happen to our favorite crew.

Three is stuck in a time loop reliving the same day.  It’s difficult to convince his fellow crew members what’s happening, even though he learned French, and remembering a detail that only new members Adrian and Solara knew about themselves.

Everyone starts believing him once one of Ryo’s hunters (Ash played by Michael Reventar) phased himself onto the ship.  It gets to the point where we figure out that one of Adrian’s gadgets, a blue glowy clock is the culprit causing the loop.  Adrian and Ash gets caught in the same loop with Three after Adrian hits the bounty hunter with the object.  In a scene reminiscent of Star Wars, as the assassin tries to go through the door Two shoots him with a paralysis gun freezing him mid-phase.

Android fiddles with the device where she time jumps to the future in several instances.  On her last jump, she sees a senior Five who hints to her that bad things are coming for the Raza Crew but the universe seems to be strangely good. Older Five helps Android get back to the present but now she doesn’t remember what she saw.  She destroys the device ending the time loop.  Oh and Three has a lovely chat with Sarah.

Ash the mercenary managed to track the Raza through a beacon the blink drive was sending out.  Android fixed it so now Ryo needs another avenue of tracking the crew to send his mercenaries. At the very end of the episode he has someone hostage.  It looked like the older Five we saw in the future.  What the hell?!

I loved so many things about this episode! The mystery of what senior Five hinted at was foremost.  A brief breakdown and my thoughts (which aren’t much) about what it means.

Adrian is still meh to me.  The whole clueless non-fighting con man bit is old.   With Three my hatred was different.  I thought he was just a prick whereas Adrian is an annoying prick.  The only thing he has brought to the table so far is the device that created a time loop.  I have to thank him though, if it wasn’t for him then Three would have died and possibly others.  For that he has my eternal gratitude.

What was great about the time loop was Three having several chances to not only make Five feel better about missing Six, but also his conversations with Sarah.  I hope they find a way to have her consciousness enter another body somehow.

I thought Ash made a worthy mercenary.  This means that Ryo isn’t sending your ordinary assassins and bounty hunters to get the Raza crew.  There is a level of respect when you hire someone with special abilities against a foe.  His ability to phase was cool too! That was a rough way to go though.  At least Han Solo could come back from being in carbonite.

Who did Ryo have with him though at the end in that chair? I initially thought it was the senior Five but now I’m wondering if he is taking Hansmeed’s idea in using someone to predict the future targeted at a specific person or group?

I did enjoy Solara’s fight against Ash overall.  When I first saw it the choreography looked slow instead of fast paced.  She is a good addition and I’m still getting Nyx 2.0 vibes.  I am hoping that she interacts with Two and Five more as I felt that Nyx hung out with Four way more than anyone else.

Until the next episode, here is my favorite scene! Two’s expression coming upon them singing, to Android teaching Three French, it was sooo good! Lemke speaking French was sexy as well! I hope he gets to do more of it on the show now!

What did you think of the two episodes? Sound off below in the comments!