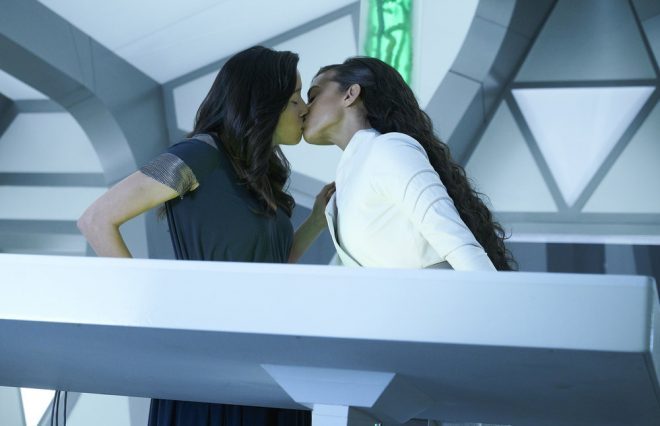 Dutch and D’avin are hiding out in a closet while two people are going at it hot and heavy. They take Captain Cardiff hostage and drag him back to the Quad.

Not gonna lie…Imma gonna need brain bleach for this one. 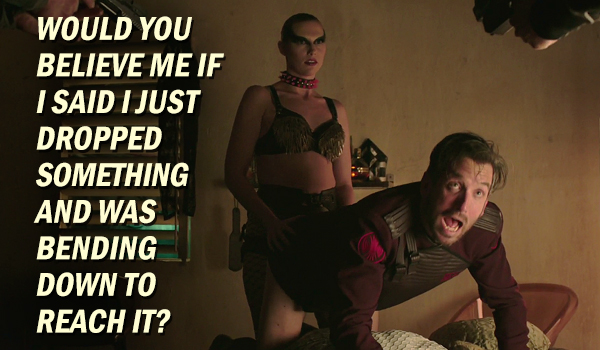 Later Cardiff finds himself in the company of two other hostage interstellar RAC captains plus Turin, Fancy and Dutch who informs them this is a coup.

Turin educates the three by introducing them to Lucian Kitaan, a Hullen who joined his ranks as a Killjoy years ago and they now have in custody. They learn the truth about the RAC, the Level 6 program and the Hullen. Turin and Dutch plan to clean house and purge the Hullen from their RAC and want the three “guests” to watch, learn and do the same with theirs.

Dutch and D’avin take teams to infiltrate their RAC while Johnny floods the ship with a paralytic agent. The mission is simple: find the Hullen Killjoys and off them. Except things go awry pretty quickly when they come upon the first group of RAC officers and, in the course of their testing (a quick slice to the cheek to see if they bleed), they realize these folks aren’t as paralyzed as much as they thought they would be. In fact, they’re not paralyzed at all. It’s an ambush!

Back on the Hullen ship, Gander begins to realize sometime around the moment Aneela starts melting his brain that perhaps the pecking order has changed significantly. He might officially be second in command but really, Delle Seyah Kendry is the one that has Aneela’s ear and holds her interest. Also, congrats on the new nickname, dude! 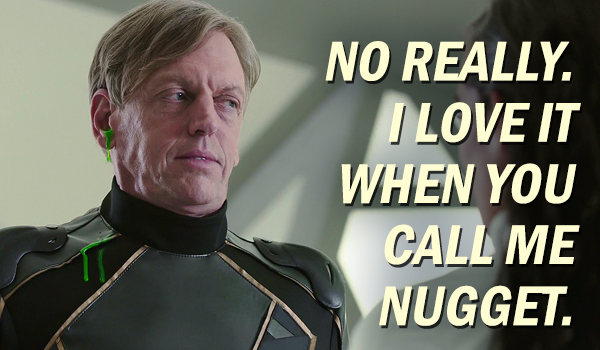 Meanwhile, Turin and Fancy wonder why the gas didn’t work and Fancy points out as former Hullen that the Hullen don’t play possum. They have another plan in the works. He wants to interrogate Kitaan since she’s only been in custody for a week to find out if she knows anything.

Back at the RAC, Team Awesome Force wins that skirmish though they do lose one (RIP Benji). Johnny spots a device on the arms of the Hullen Killjoys that protect them against the paralytic agent. They knew and were ready. Translation: Team Awesome Force has a mole. They don’t have a lot of time now. All the humans on board are paralyzed and helpless to defend against the Hullen Killjoys. So Dutch tells them they need to get more firepower from the armory good and fast.

But the Hullen stop them on their way to the armory. Johnny and D’avin have to act fast so Dutch can slide down a hatch and escape…into the garbage chute. 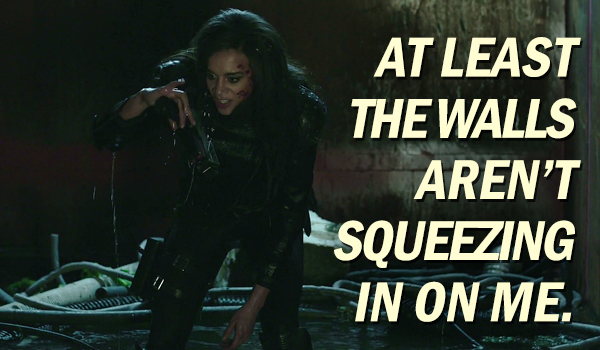 The Hullen take Johnny and D’avin for questioning. And by questioning, I mean Johnny’s put in to a chair with a device that slowly and painfully erases memories and D’avin’s forced to watch.

Dutch, now barefoot and stripped down to her skivvies (her uniform reeked after her Han Solo-like adventure in the garbage pit) makes her way past several Hullen Killjoys and into the armory where she guns herself up to her eyeballs and then comes across the most dangerous weapon ever invented: the Genetic Bomb hiding in an old dusty box. The last time we saw this puppy in action was in Season 1 when Seyah Kendry activated it in an attempted coup by Land Kendry to take over the Company. She’s about to split when Banyon stops her at gun point and they have a little chat.

And by little chat I mean a big ol’ fight.

But Dutch gets the upper hand and pins Banyon to the lockers before stabbing her in the side. And waits. And watches. But Banyon doesn’t heal. And then she realizes in horror: Banyon is human, not Hullen! She asks Banyon to release the seals so she can get help and Banyon scoffs at her. There’s no way she’s falling for that trick.

That’s when Dutch fills her in on everything: The purpose of the Killjoys, Level 6’s, the Hullen. Everything. Banyon isn’t surprised. She’s known for awhile something was going on but she could never get to the bottom of it. That’s why she transferred to this RAC, so she could find out about the missing RAC agents. So she can learn the truth. It turns out they were allies and just didn’t know it. Banyon releases the seals and Dutch takes off with a promise to return with help. 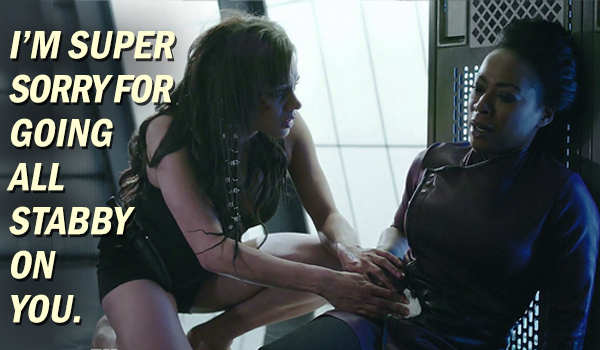 Back with Johnny and D’avin…Radek, their Hullen interrogator, turns up the pressure by bringing in another possible victim to torture, McEvoy. Except McEvoy stupidly reveals that he was the mole and Radek fills in the blanks. He betrayed them all for the hopes of eternal life. Radek rewards him with a bullet to the head and asks if this sleaze ball was an example of what D’avin and Johnny were fighting for. D’avin says yes it is. They’re fighting for the right to make decisions, the freedom to choose. That McEvoy chose wrong is beside the point. Radek clarifies that it’s because the possibility of betrayal exists in human nature, they will lose in the end. This trait doesn’t exist within the green oozy perfection that is the Hullen.

But Radek is growing tired of trying to get Johnny and D’avin to spill and threatens to turn Johnny into Hullen, since there are no secrets in the Hullen. That makes D’avin angry…like Incredible Hulk angry and he tunes into his special powers to try to stop Radek.

Except his aim is bad and he explodes the wrong Hullen’s eyes, leaving Radek to stare in realization. Only the commander, Aneela, has that ability as far as he knows. And now he gets why Aneela wants him so he knocks D’avin out and has him taken away before ordering another Hullen officer to kill Johnny.

Thankfully Dutch gets there in time to dreadnought the hells out of the guy and save him. Johnny fills her in on D’avin’s whereabouts and she shares her discovery of the Genetic Bomb. She suggests they use it on the Hullen since they all share the same parasite DNA. This means they can take them out remotely so maybe they don’t have to chase Radek down after all.

Meanwhile Fancy begins his interrogation with Kitaan but little by little, we can see her picking at his defenses about who he is and who he was as Hullen. She’s a master at mind games And Fancy isn’t the only one affected by her manipulations as Cardiff whispers in Turin’s ears and makes him doubt Fancy’s loyalties. So much so that when Kitaan attacks Fancy, Turin doesn’t intervene. And when Fancy tries to get out of the cage, Turin neglects to open the door. Meanwhile Cardiff is busy suggesting that if Fancy gets out, he’ll kill them all. The other Captains are urging Turin to activate the bomb attached to Kitaan’s neck. And while he doesn’t go that far, he does take Cardiff’s words to heart, abandoning Fancy in the process. That’s a dick move, Turin. 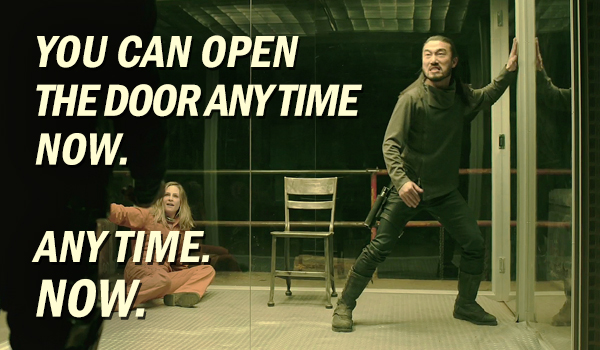 Johnny and Dutch prep the Genetic Bomb but there’s a big concern that the device might not be able to distinguish Hullen Killjoys from human ones given the Hullen bonds with human DNA. But when you get down to it, they have no choice. If Radek escapes with D’avin, he’s gone forever. Just as they’re about to activate the device, two Hullen Killjoys appear and then disappear as the Genetic Bomb disintegrates them in mere seconds. And not just them, but every Hullen in range, including Radek and all of Fell Squad. Buh bye. 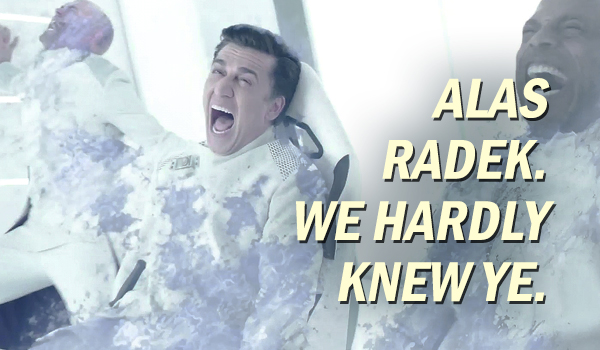 Johnny rescues D’avin from Radek’s ship and Dutch returns to the RAC to find Banyon didn’t survive. That’s the real tragedy here. She was a good woman and would have been a valuable ally in the war that is fast approaching.

The gang goes to celebrate their win but the mood is somber, pensive. Dutch is feeling the weight of killing Banyon and Fancy is entirely uninterested in Turin’s attempts to kiss and make up. It just may well be that Cardiff’s warnings and Kitaan’s promptings that Fancy would turn on them all is a self fulfilling prophecy, since Fancy now knows what Turin thinks of him and where he ranks on the team. As in, he doesn’t. They don’t really trust him and they don’t have his back.

The good news is Cardiff is now fully on board with the “kick Hullen ass” agenda and intends to go back to his RAC to prepare teams of Killjoys to take part.

Back on the Hullen ship, Gander alerts Aneela that Fell Squad is missing and Aneela is a-okay with it. She got what she needed, even though she didn’t get the package she wanted (D’avin). It takes bit of doing but Seyah Kendry talks Aneela into taking her in as a confidante, a champion, since Aneela’s version of Hullen isn’t quite like the others and thus isn’t immune to the need for companionship.

And Aneela does confide in her to the point Kendry realizes Aneela’s been playing Gander and Kendry against each other to distract them from what she was up to. All the little back and forths like the face off in the hallway earlier in the episode were just a means to keep them occupied so she could set up a very decisive attack: All the RACs near the Quad which were about to turn on the Hullen were blown up, one directly in front of Dutch who was taking Cardiff back to his RAC.

Aneela explains to Kendry that she wants Dutch isolated and alone before she kills her, just like she was. And with that little display, she and Kendry seal their partnership with a sexy yet evil kiss.

Attack the Rack was a fantastic setup for the second half of the season. Aneela has proven to be quite a bit more cunning than perhaps I originally thought and it’s fascinating watching Delle Seyah Kendry navigate her new role amongst the Hullen. (Yes I still hate her guts for killing Pawter, btw. Don’t think I’ve gone all warm and fuzzy on you there.) As for Team Awesome Force, they hit some extremely significant setbacks, lost at least one valuable ally and are not in good position strategically moving forward. In fact there’s not much in the way of good news for them as it stands right now, other than the genetic bomb. Perhaps Zeph’s discovery from the last episode will reap good things? Hmmm.

I give Attack the Rack 9.5 spikey dreadnoughts out of a possible 10.