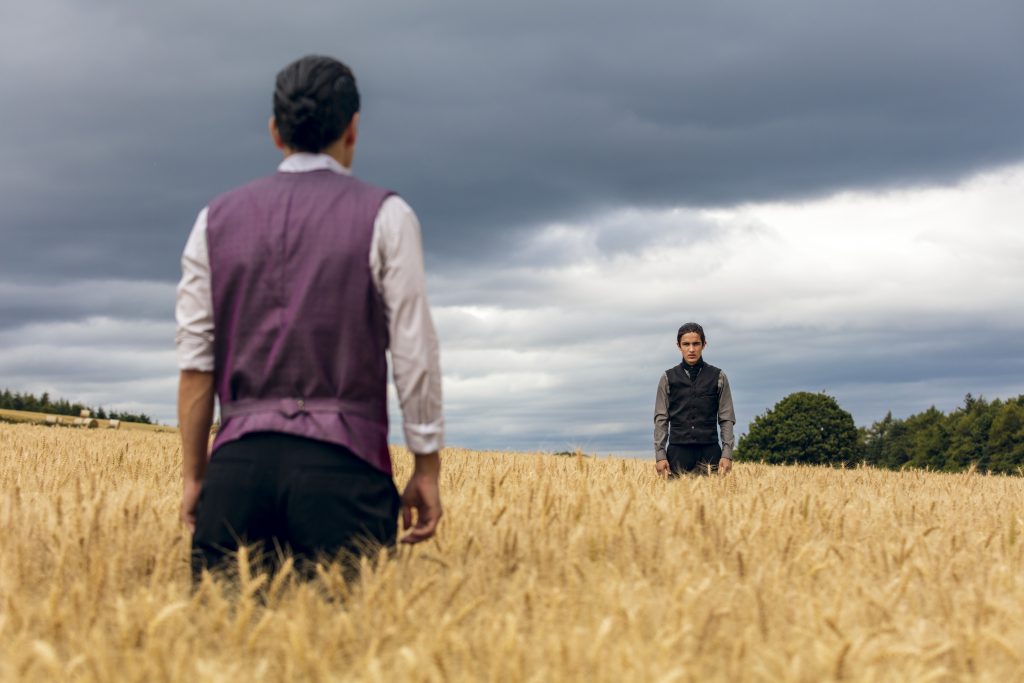 Boy were there some revelations revealed on last week’s Into the Badlands episode: Moon Rises, Raven Seeks.  Here are some basis deets:

I felt this episode was another way of setting up the different plot points of the season.  There were moments that felt predictable, some had me pleasantly surprised, and one shocked me.  Kudos as usual to the wardrobe department.  The panned shots of land were gorgeous as always. I really need to visit Ireland again!

Nathaniel Moon (Sherman Augustus) looks damn handsome in blue! I’ve always liked the color royal blue, and this is exactly why! Granted the Widow aka Minerva’s soldiers and butterflies look just as good but still.

Moon got his first assignment from the Widow in finding the Iron Rabbit.  We know this is Tilda (Ally Ioannides).  I wonder if Minerva suspects who it is? She was ruthless in wanting the criminal’s head. I was thinking, “dang, no love lost then on your daughter.”

Minerva’s track record for regents is not great so it makes me wonder when Moon will turn coat on her like Waldo (Stephen Lang) and Tilda?  Even Lydia called the Widow on her hypocrisy in a conversation I didn’t even realize I needed.  I love how Brady and Beecham played off each other in that scene.  Lydia’s lighter colors also contrasted well with The Widow’s signature black.

Speaking of Waldo, are we going to see him at some point?  I like that Moon is representing for prosthetic folk but why can’t Waldo still be around, so we have two disabled people on the show? My only guess would be so Moon has more character development since Waldo got two seasons with us.

When the Widow mentioned needing workers for the poppy fields, I was wondering if she will pay wages or still treat cogs like free labor.  I thought that was something she wanted changed? From what Minerva was offering Lydia, that didn’t seem to be what she would do. She is so caught up in the gift that her version of a new world sounds very similar to the old one.

Umm so Lydia and Moon have history huh?  I was feeling some chemistry there.  I peeped how Lydia hinted at Moon that NOTHING was holding her back from getting with him. Get it Lydia!  She deserves to be happy. Moon, even with his vendetta, is way better than Quinn on a good day.

So far, I am enjoying interactions with characters that haven’t had too many scenes together, like Lydia with both Moon and the Widow.   I would not blame Lydia for giving up Tilda when it means her camp is spared. Tilda will not stay at camp as Lydia requested anyway so that works.  I chuckled when Lydia told Tilda to stay put.  She should know better.

Sunny and the witch

Bajie reluctant to find the witch Ankar because he thinks she’s crazy is understandable.  For some reason when he said that I thought of Cressida.  What if they are the same person? That would be crazy! Sunny going to seek her out anyway is also understandable.  Besides, them escaping from Moon is a good thing as their rematch is too soon.

Pilgrim and Cressida (Lorraine Toussaint) find a home base for their followers.  I liked that it was a museum building with dinosaur bones.  Seeing the American flags in the souvenir shop confirms that they are somewhere in the United States.  Castor (Dean-Charles Chapman) and Nix (Ella-Rae Smith) looking at Azra through the view master brought me back to my childhood.  I thought for sure the toy would be extinct, but they are available to purchase on Amazon.

When they first entered the building my immediate thought was who is going to clean up that area? I would not want that job! Also, as soon as old dude was complaining about the building, “loosing faith” I had to roll my eyes because Pilgrim had to make them believe in him again.  Cressida probably just wanted the guy dead, but Pilgrim handled it. 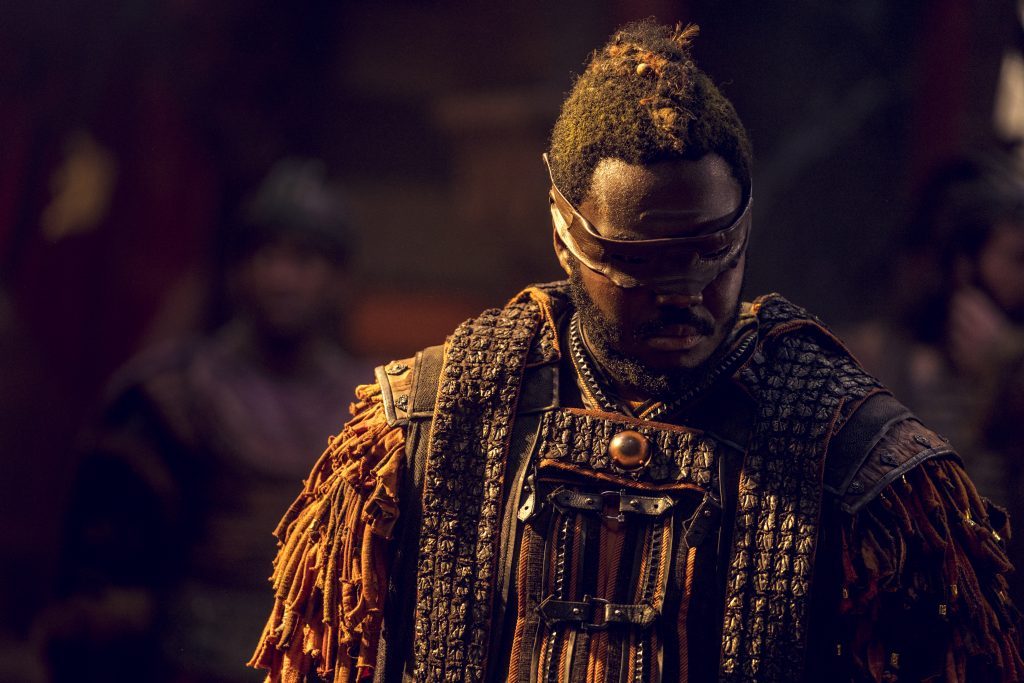 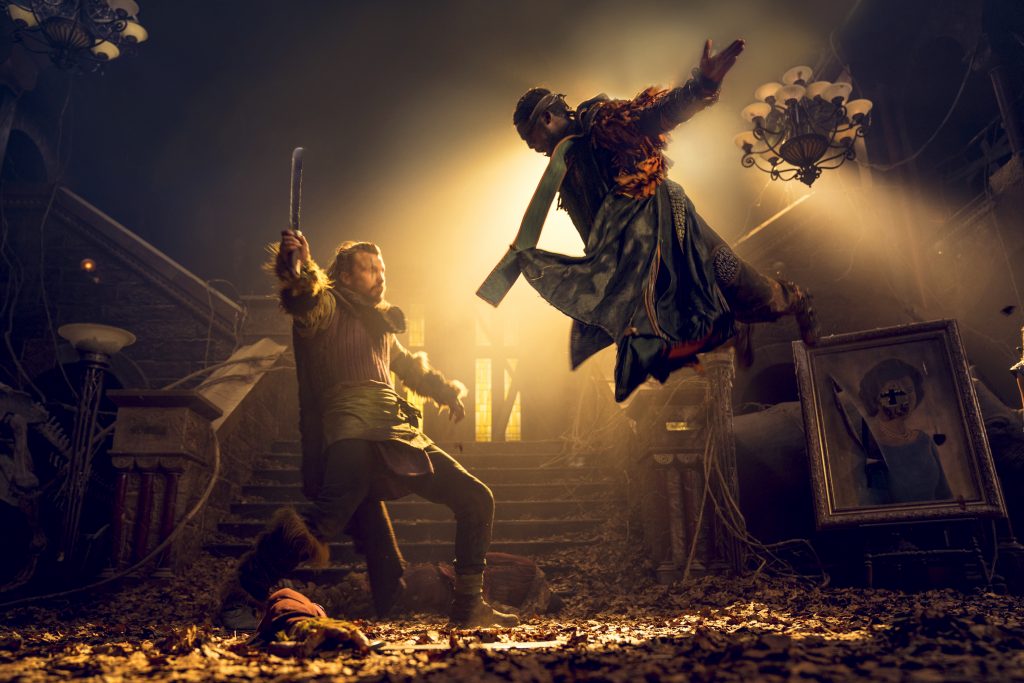 Pilgrim had to show us that he wasn’t just all talk.  It was a nice display of skill with his eyes covered. I noticed how the main complainer did not even try to fight Pilgrim but had his cronies take the hit. Oh, so now you want to believe again bruh? Child please.  Just to be extra I probably would’ve killed him anyway.

We saw in the premiere how Castor changed back not long into using his gift.  Last week we saw his ears bleeding.  The Pilgrim is aware that he is deteriorating faster than expected.  Nix appears to not have this issue so far.  I am wondering if males wane faster than females with the gift? While we have seen grown men in the abbots, my guess is because of the training they received from the Master (Chipo Chung).  It looks like this group does not have abbots to guide them.

The title of this episode had the most meaning in the scene where Cressida performed the sacrament with Pilgrim, Nix, and Castor. By suspending her body using hooks in her back, the gods provide her with visions of what happens next.  All I could do was cringe the entire time this was happening.  It was creepy that Cressida kissed Pilgrim to gain strength from the blood on his lips.  Hanging like that, blood dripping, looked like it hurt.  Also why were the followers not witnessing Cressida’s pain and sacrifice?

I fell down the rabbit hole that is google wondering if there was a similar ritual that the show pulled from and I found out that the Mandan tribe of the Plains Indians used body suspension as part of the Sun Dance ceremony or Okipa*. That portion of the ceremony helped with the vision quest the young men went on according to the book found on SemanticsScholar.org.

In present day there are groups around the world that participate in using hooks to suspend their bodies. There are several articles about it, like the one from Huffington Post from a few years ago that caught my eye.  Ziplining and even bungee jumping sounds more appealing but to each his own.

This is petty, but I got a kick out of Nathaniel Moon schooling M.K. while testing out his new mechanical hand.  This seems to be tradition now that there is at least one adult that kicks M.K.’s butt when he is being cocky as hell.  M.K. still has not learned that he still has some growing up to do.

I also thought this was some twisted foreshadowing with what M.K. finds out later in the episode after gushing about being trained by Sunny.

Moment of the Week

A memory is unlocked in M.K. solving the mystery of what happened to his mother. FINALLY! The “gift” version of himself in his opium state told MK that the master had him thinking he killed his mother (Elif Knight) through manipulating his memories.  That could be true.

Or the alternative is that M.K. already feared that he killed his mother so that’s what his mind projected using the memories he never fully unlocked until now.  I love how the evil version of M.K. was calling him on his BS.  However, it sure did take its little sweet time appearing to M.K. so he can get over his block!

I did not forget that he used that girl to get some more opium.  Like a love sick puppy she gave it to him.  Girl, is he really putting it on you like that? Was having to be under opium necessary for the memories to happen? Ugh! I guess since M.K. was on the verge of overdosing is when his dark self was like “Oh, hell naw!”

This was a shocker for me.  I had a feeling that what M.K. remembered would be brought up again on the show but to have Sunny be the one that murdered mama? Is M.K. going to forgive Sunny, considering it was on Quinn’s orders that his village got attacked in the first place?  Mind you Sunny was a different person back then.

A rematch between Sunny and M.K. must happen now.  What will it mean for their relationship though? We will have to see. It would help if M.K. snaps out of his coma though!