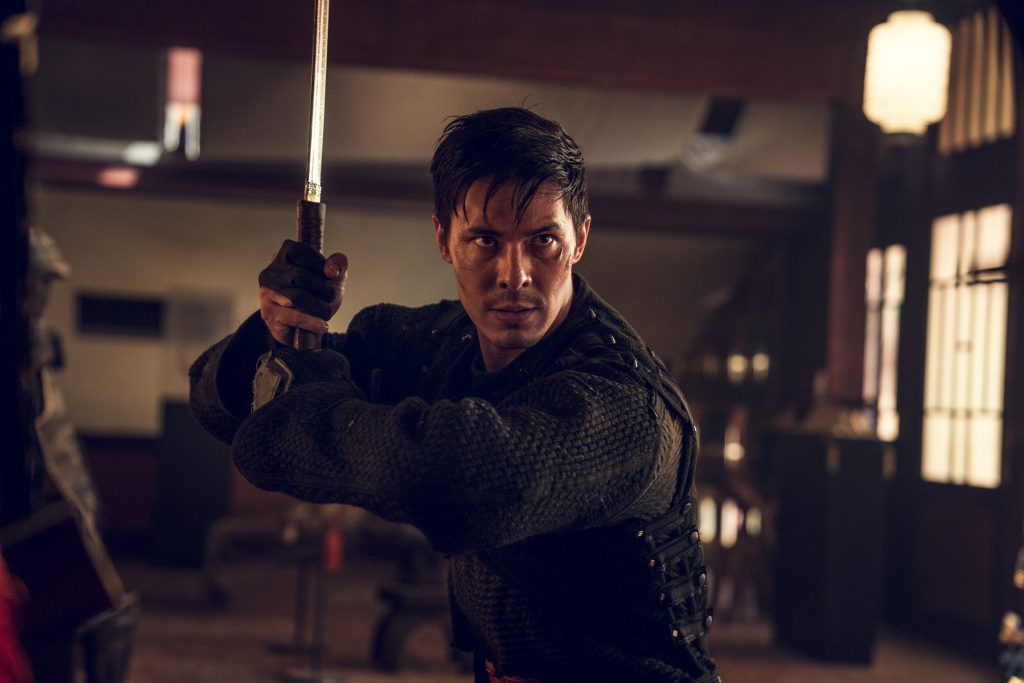 Cannibals, fights, flashbacks, more fights, and Gaius Chau, all in this action-packed episode of Into the Badlands: Blind Cannibal Assassins.  The deets:

Synopsis:  Sunny (Daniel Wu) and Bajie (Nick Frost) face off a deadly new foe with a dark connection to Sunny’s past. Chau (Eleanora Matsurra) enlists her brother in the fight against Pilgrim (Babou Creesay).

I went through several emotions in this episode.  There was excitement, because Lewis Tan as Gaius Chau was FINALLY here! I also felt empathy, frustration, and giddiness. The prominent one being frustration.  The majority of that feeling lays on Mr. Nathaniel Moon (Sherman Augustus) and M.K.’s (Aramis Knight) feet.

A pattern was noticed in the fight sequences again.  Despite that I still felt there was good choreography.  Sunny and Bajie escaping from the assassins was like when they first teamed up escaping from the mines in Season 2.  The brief nod the Widow and Pilgrim gave each other during the battle reminded me of when Sunny and the Widow teamed up last season.  That entire sequence was reminiscent of the conclave and the Sunny Widow team up.  I really liked the music used as it provided building tension on events.

I was disappointed in Moon for most of the episode.  He could have at least pretended he cared about the war effort. Totally did not have to be a dick to clipper Arthur neither. He has had to hold down the fort for several weeks as the leader.  Those questions he raised were valid.  At least Arthur credited Sunny with taking the pass. That irked Nathaniel even more I bet, hince the pettiness.  If Sunny had gone a different direction, would Nathaniel have bothered with overcoming the sniper to take the pass?

This was the first time in weeks that anyone with any authority has visited the war zone.  Has the Widow even bothered to visit the front lines for moral support? If not, I am really wondering how many deserters have disappeared since this war began? I would not blame them either.

Bajie and Sunny should have known better than to take food from a stranger considering they were sold into slavery before.  Blind or no that should’ve raised red flags. I was even more surprised that Moon fell for the okie-doke.  The purpose was to move up the reunion between the three characters, and the overall plot of the episode for Sunny, but it just made them seem naïve instead of experienced.

Moon frustrated me even further later when he insisted on wanting to kill Sunny for his stupid honor.  Sunny pretty much told him:

Thank goodness Sunny got through to him because of his son.  Henry saved him the hassle of having to fight Moon.  Dude, you knew that Sunny had a family before when you fought him! Moon let his pride control his actions.  He should concentrate on getting with Lydia and giving a crap about this war.

I sided with Odessa (Madison Jaizani) for the first time when she told Tilda (Ally Ioannides) to let M.K. go.  Right now, he is in his feelings.  M.K.is following the same pattern that Moon did in not seeing the bigger picture. He kills Sunny, then what? Now Henry is without a mother or father.  When Henry grows up he will go after M.K. for killing his dad.  The vicious cycle continues like Sunny explained to Moon.

Also, I was hoping for M.K. to spend more time with Tilda. It seems like every time they reunite, one or both of them have to go off somewhere.  How can their friendship develop if they are always separated?  I wanted to see them team up again darn it!

The stubborn teen did not have a plan whatsoever.  M.K. left without the doctor looking at his cut, which is now bleeding again and probably infected.  Did he even carry any food or weapons with him? What was he going to kill Sunny with, his bare hands using his dark abilities?  M.K. just:

Hopefully someone will slap some sense into M.K. but that may be awhile. Now he is caught by Nix (Ella-Rae Smith), who is feeling some kind of way now that Cressida (Lorraine Toussaint) already wants to replace her brother Castor (Dean-Charles Chapman).

I give the blind man props for having a sure-fire script to lure Sunny, Bajie, and Moon to the cannibal lair. His offer of food makes me leery the meat they ate was human. Ew.

Kidnapping Henry was unexpected.  After seeing the fetuses in jars, it makes sense that they would want a child.  Why subject that child to that lifestyle though? Were they going to blind Henry too or let him be the only seeing member of their group until he became of age?

Apparently Sunny has encountered these cannibals before. Through flashback, we learn that they were former clippers of Quinn (Marton Csokas) and another baron.  Allisoto (Alexandra Moen) and Jarl (Michael Gould) are the ringleaders.  They thought it was a good idea to kidnap Ryder and hold him for ransom.  Sunny (Frank Kauer) was a colt and Waldo (David Alexander) regent at the time when they caught up with the deserter clippers.  Blinding them was the punishment.

Kudos to the casting director for getting a young Sunny and Waldo that had some resemblance to their older characters!

When Sunny confessed to Allisito, I agreed with Bajie and wanted to smack him! However, it turned out there needed to be closure on that chapter of Sunny’s life.  It’s a shame he kills all of them (except for Allisito) in this episode, years later after blinding them.  Coming full circle sucks sometimes.  The reason behind the clippers deserting in the first place was Allisito falling in love with a rival baron’s clipper Jarl. Sunny could empathize. But why hold Ryder for ransom?

I think Sunny needs this journey with Henry, confronting parts of his past and seeing how much he has changed for the better.  I remember the dream Sunny had last season while he poisoned.  Especially the part where the people he killed were fighting him then piled on top of him, weighing the man down with his past kills. I think that was foreshadowing Sunny’s arc this season.  The Artemis (Hazel Doupe) ghost saying that Henry will be just like him makes me think it has something to do with the dark powers.  Again, part of the overall journey. The inevitable fight with M.K. will probably be a major piece to reconciling Sunny’s past.

The escape was still cool to watch and deserves an honorable mention.  I always like seeing Bajie fight, because he reminds me I have no excuse to not be exercising. When Bajie squashed those assassins, I thought it was an effective way of using his weight to his advantage.

Having Moon there so Sunny could initiate the escape using his cool prosthetic hand made me forgive his pettiness slightly.  I wonder though how Sunny would have escaped if he could not reach Moon’s hand or if Moon was not captured in the first place.

Oh, my Gaius Chau!  It is a pleasure to meet you!  This is the first time I have seen Lewis Tan in action since I refuse to watch Iron Fist.  I loved Baron Chau last season when she was introduced.  Seeing her again be ruthless gave me joy because a villain is needed that likes being an ass.  It also made me root for Gaius.  There’s nothing like a good old-fashioned sibling rivalry.

How ironic Chau threatens her brother’s men to get him to kill Pilgrim.  Most of them wound up dying anyway. My guess is she wanted to kill two birds with one stone.  At least then she could tell mother Gaius died with “honor.”

When Gaius was sneaking around in the woods, I thought for sure he would find M.K. hiding.  Did he just decide to leave M.K. alone? Did he sense the injury or something? Worth pondering for sure.

Several of Lydia’s (Orla Brady) cogs dipped from the poppy fields after getting flyers advertising Pilgrim’s new Azra.  The Widow (Emily Beecham) and Lydia go visit Pilgrim and Cressida to size them up.

I enjoyed the conversation between Cressida and Lydia about faith and religion.  This reminds me of the talks Lydia’s had with her father in previous seasons.  Lydia has been conflicted about faith and the gods, so I like the show is circling back to it.

Pilgrim recruiting right now is timely anyway since the war has torn the Badlands apart.  The people are seeking stability.  The appeal of what Pilgrim is offering would be tempting.  Baron Chau nor the Widow give folk a feeling of confidence.  The Widow needs to heed Pilgrim’s words.  “Will the changes you’ve made take root, or will they wither and die?” It is already happening considering Pilgrim gained several followers already.  There is no taking root of anything so far.

Having an “Azra” is still problematic.  Who gets to decide who enters or leaves this “heaven?” Are all people equal or will there still be the powerful against the weak? The promise of heaven sounds just as much of a hustle as Lydia told Cressida.

And now comes the…

The assassination attempt on Pilgrim was another titillating fight sequence.  My favorite part of that battle was the fight between Castor and Gaius.   There was one part where Castor quickly attacked with his knives while Gaius defended that was excellent.  I feel like Chapman was exorcising King Tomlin from “Game of Thrones.”

Either Gaius is very clever, or he gambled on the outcome of this battle.  Why didn’t he wait to see the outcome of the meeting between the Widow and Pilgrim? The Widow may have done the work for him if he waited.  She had a split-second decision when she saw Gaius aim for The Pilgrim.  Now that Lydia confirmed that the assassins were Baron Chau’s, there is at least a truce between the Pilgrim and the Widow.

From this fight Pilgrim revealed his ace in the hole to the Widow, being able to turn off Castor’s gift. The Widow will be wanting to know that ability so she can control those with dark powers!  Will Pilgrim teach it is the question.