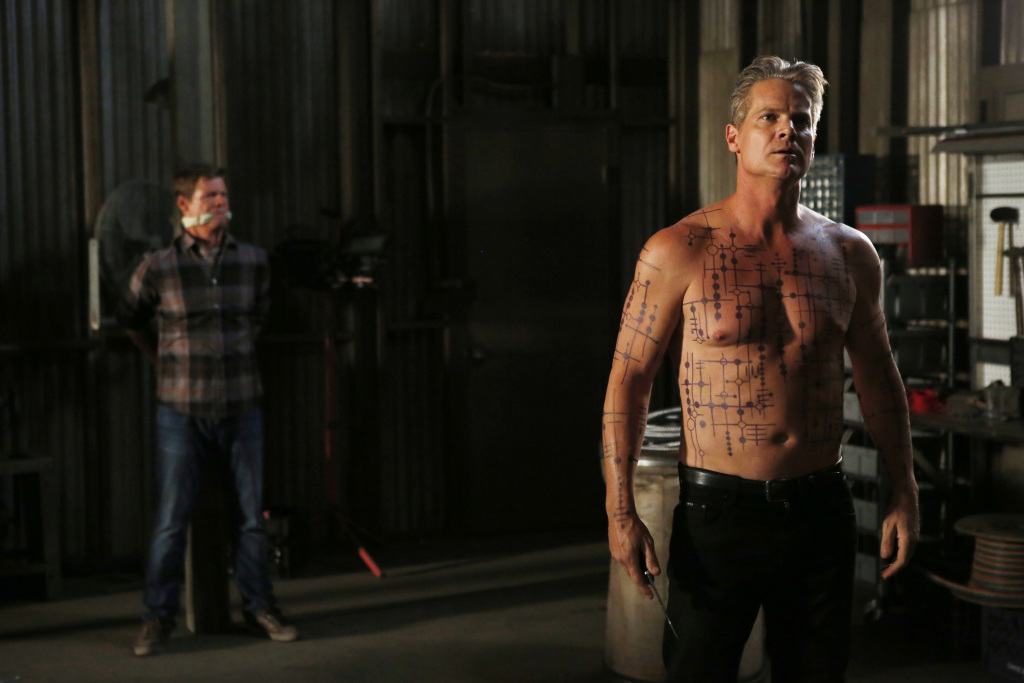 As we have seen with previous episodes of season 2 of AoS,  Coulson has been seen carving something on the walls, his desk, etc. Well in the beginning of this episode you find out that he isn’t the only one, but instead of carving on walls like Coulson this guy carves the markings on people’s bodies. This guy has all the carvings tattooed all over his body. Meanwhile May, Mockingbird and co are searching for Ward, who had escaped before he could be delivered to his brother. The team tracks him to a airport station. Ward is seen taking a  bus instead and he points out Mockingbird and tells her to say hi to Coulson for him as he gets off the bus and on to another. It seems he is going to his brother anyway, but on his terms.

Back with Coulson and team, Coulson can’t remember why there would be other people like him so his only choice to try and figure it out is to use the  memory machine that Reyna used on him in season 1. This process reveals some deep under dealings of S.H.I.E.L.D. as the team finds out from Coulson’s memories that he wasn’t the only person that was used in the Tahiti program and that he was also the one in charge of the whole thing. It seems once other agents who were test subjects got out of hand they would erase their memories and give them new ones, however there was one agent who remembered and is now targeting other agents in the project to try and see what the carvings want to show him. Eventually Skye is able to track down the rogue agent’s next target and Coulson takes it upon himself to deal with the problem while everyone else focuses on finding Ward. It also seems that Ward has some left over HYDRA connections that he uses to get part of his plan going. Ward also give a call to Skye to give her some warning that he might be taking out all the new agents in the future and he continues not to lie to her as he has promised.

Once Coulson gets to the target house he has to threaten his way in, but unknown to him the rogue agent is already there and ambushes Coulson and tells him that he remembers everything. We next see Coulson hanging up in the target’s workshop and the rogue agent goes to start carving into Coulson. Coulson manages to escape and during the battle the rest of the team shows up. The fight is quickly over as both Coulson and the rogue agent see what they have been trying to see the whole time. It seems the target agent has been building something that is a blueprint to the carving despite his memory of the project and of S.H.I.E.L.D.

The Episode ends with something some of us have been waiting for. Could we be seeing the Inhumans sometime soon in AoS? I say this because the blueprint is of a city that looks very familiar with the Inhumans city of Attilan . Only time will tell.