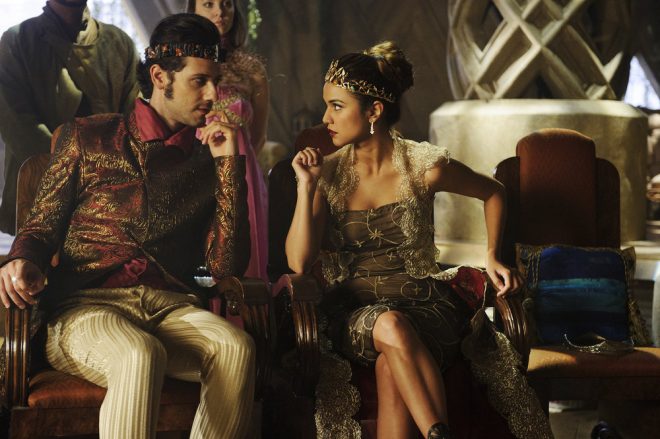 Margo (Summer Bishil) almost gets tricked into marriage, while Kady (Jade Tailor) comes to Julia’s (Stella Mauve) rescue again.  Niffin Alice (Olivia Taylor Dudley) pays a visit to Quentin (Jason Ralph) and tortures her parents at the same time. All that and more in this week’s episode of The Magicians!

Quentin tries to summon Alice by dancing around the place where she died.  Eliot (Hale Appleman) and Margo look on with pity.  They want Q to help them rule, he agrees but first he will attend Alice’s memorial service and tell her parents what really happened.  Quentin sees ghost Alice at the repast and she leads him a specific book in her father Daniel’s (Tom Amandes) study.  There is a spell that will bring Alice’s spirit peace so Daniel claims.  Dad creates a 3D triangle where they hang a mirror at from the top of the tri-point.  Just when he does the spell he breaks his leg, so Stephanie (Judith Hoag) steps up but makes Alice’s death about her.  She does eventually admit that she could never understand Alice.  Upset, she walks away, leaving Quentin to finish the ritual.  Alice appears but as her niffin self.  She reveals that she’s been messing with him and her parents the entire time.  She didn’t really die.  She now hides herself in Q’s tatoo, ready to make his life chaotic and anyone else’s at will. Oh boy…

Eliot and Margo get approached by Prince Ess (Arlen Escarpeta) of Loria about using half the wellspring once fixed.  He proposes to Margo to entice the deal.  Margo refuses the offer using her usual flair for diplomacy.  Consequently, Prince Ess has one if his guys, “transport” the castle to his land Loria.  Margo later tries to negotiate but it falls on deaf ears so turns to her sexual wiles.  Meanwhile Fen (Brittany Curran) eventually confesses to Eliot that she was a FU fighter after an earlier attempt was interrupted.  He doesn’t take the news well of course.  Eliot at first advises his High Queen to marry Ess since that is part of ruling a kingdom, making alliances by marriage.  After hearing Fen’s confession, though, he no longer thinks it’s a good idea even though Margo’s now warming to it.

Earlier Penny (Arjun Gupta) asks for help locating the moss. Eliot gives him Benedict, Fillorian mapmaker extraordinaire, to help him find it.  Initially Benedict was going to give Penny a map of the location after several days, but changes his mind when Penny saves the day again by informing Margo and Eliot that they’ve been played.  The castle was still in Fillory, not Loria.  The wrath of Margo descends on the Prince and his minions when she declares war, surprising Eliot, even though he was enjoying his bestie’s tirade!

Julia finds an event that could be the one that banished Reynard (Mackenzie Astin).  It occurred in 1976 in Hoboken New Jersey of all places.  Julia and Kady go to a building and see remnants of a spell circle casting.  They use that trace to find the spell caster Dana (Lee Garlington).  Julia goes to see her while Kady gets word on something that could help terminate Julia’s pregnancy. Julia explains to Dana that Reynard is back and she’s pregnant. Dana initially refuses to help but eventually agrees to do so.  However, Dana lures Julia to her basement where she ties her up.  She explains why the Haxenpaxen, the human like thing using kitty litter, was down there.  Its magic helps hide her so Reynard can’t locate her.  Dana got pregnant too and used the birth of her son to harness enough power to banish Reynard.  She tried to abort the baby like Julia with no success so gave birth and must have given her son up for adoption and memory wiped him.  Julia will stay there until she gives birth, or so Dana thinks.  Kady, after finding out what she needed, finds Julia’s help signal and rescues her by punching out Dana. They leave her unprotected by taking the Hexenpaxen with them.  Guess who shows up not too long after she wakes up.  Reynard, ready to torture and kill her.

Julia and Dana were both wrong with how they handled things.  Dana was wrong for kidnapping Julia and Julia for leaving with the Haxenpaxen for Reynard to find Dana.  If you think about it, they both shared a traumatic event by the same guy, they should’ve been able to work together.  I get that Julia doesn’t want to keep the baby, but her attempt to get rid of it was a disaster.  She should still consider what Dana said.  However, how could she consider it tied up like that?  Bad move Dana.  Julia knows she f*cked up by summoning Reynard in the first place.  She’s paying for it by being pregnant.  However, Julia should’ve been a little more understanding why Dana would go that far.  She managed to banish a crazy god several years ago, and stayed in hiding.  Julia should have respected that and did what she could to protect her now that Reynard is loose despite her being tied up.  Dana kept her end as far as telling her a way she could have enough power to banish the Fox.  They didn’t even get far into what spell she used because of Kady coming in.  Dana was dumb in telling Julia about the Hexanpaxen, but because of how it was living Julia may have taken it with her anyway. By the way having to clean that creature’s litter waste: ewww!

I couldn’t stand Alice’s mother last season and I’m not surprised that she would make it about her during the repast.  This was not covered in the books, so I’m glad they did it on the show.  Just seeing if maybe her parents really cared about Alice after all would’ve been nice.  I think Daniel made more of an effort than Stephanie in this situation.  This was a good way for niffin Alice to mess with Quentin and get back at her parents for treating her like crap. I do like how the writers gave Amandes and Hoag more depth to Alice’s parents that wasn’t in the books.  I’ve enjoyed them in these roles. I just realized that Hoag was April O’Neil from the 90s Teenage Mutant Ninja Turtles movie! Will always love that cheesy movie!

On another tangent, Penny being an douche is starting to get old.  He doesn’t have to be rude almost every time he talks to someone.  For example, he didn’t need to be a jerk towards Eliot when he was trying to be nice. I understand that he is rushing to fix his hands but he didn’t need to snap at the High King.  I like Penny’s brashness, it’s part of his charm, but sometimes it is overdone.  He needs to tone it down.

The humor in the face of serious situations is still on point with this episode.  I feel like Margo and Eliot should judge on bad auditions in a dancing competition and just slay with their comments! I would die laughing! Let’s face it Quentin was doing a bad version of a cirque de soleil ballet mash up.  Margo later being affronted about being called a virgin was hilarious!  She was already pissed about the effrontery of Prince Ess proposing but she latched on to the virgin statement like white on rice.  Eliot calling Penny “Uncy Penny” had me rolling.  The name Prince Ess I’ll admit took me a second like Eliot.  The name of the episode is humor enough as it refers to Loria’s cliffs looking like penises. I also enjoyed seeing Benedict’s dedication to map making like in the books.  Thank goodness, we are seeing more of Benedict which is what I wanted!

It was a good thing that Fen confessed instead of Eliot hearing about her previous involvement with the FU fighters from Baylor.  Thank you writers for not going where I predicated last week! I got worried that she would keep getting interrupted but the next thing I know it’s done.  Hopefully Eliot will forgive her eventually.  He did mention to Margo how he was just starting to like his wife. Me too Eliot, me too.  Things are going to be awkward between them for a while.

I loved that Margo the Destroyer made an appearance after getting fooled.  I’m wondering why they didn’t think that Ess was tricking them to begin with.  I guess the writers had to leave it open for Penny to come to the rescue again.  I’m wondering how he’s going to collect on the favor Margo now owes him, especially when he came to her in her dream.  Maybe her dream was foreshadowing considering she felt like an idiot for being naked during a mid-term exam. She now feels like a fool for sleeping with Prince Ess when he tricked her.  I was surprised that she was already considering marrying Ess when she hardly knows him, especially after making a point of refusing a political marriage for solid reasons.  I guess physical chemistry rates high on her list for people that she would potentially marry.  Like Eliot, I’m concerned about her declaring war when there could have been a diplomatic solution.  Side note, Escarpeta who plays Prince Ess, has been on several shows that I’ve seen him in so it was nice to see him again on a hit show.

I can’t wait to see how Eliot and Margo will win this next hurdle!  I also miss all the characters together so I’m looking forward to seeing that next week!  What did you think of the episode? Sound off below in the comments!

Amazon debuts RESISTANCE RADIO from The Man in the High Castle, today