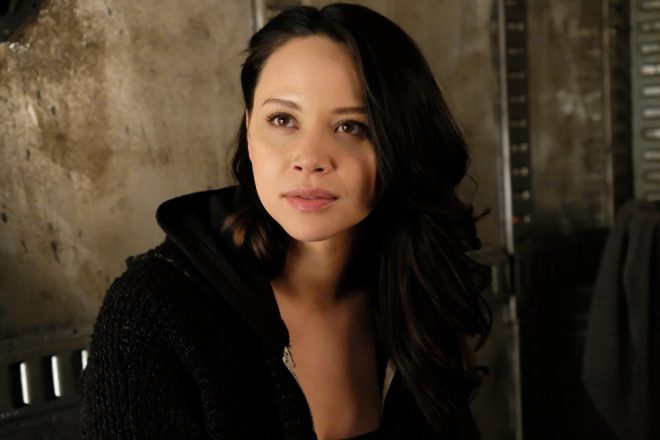 The alternative universe (AU) Raza Crew are back causing some trouble in the Dark Matter episode “One Last Card to Play.”

Now we know who travelled from the AU when the Raza crew made it back to their universe last season.  Portia (Melissa O’Neil) and Boone (Anthony Lemke) steal one of Ryo’s (Alex Mallari Jr) ships and eliminate the prisoners Ryo wanted questioned regarding the would-be assassin.  Boone, Portia, along with Tash (Jessica Sipos), Wexler (Ennis Esmer), and Android (Zoie Palmer) from the AU double cross Commander Truffault (Torri Higginson) by keeping the missiles she wanted smuggled into Traugott territory for themselves. The AU crew then try to steal the blink drive from the Raza.  After that fails, Portia makes a deal with Commander Nieman (David Richmond-Peck) of Ferrous Corp.

In other news, Teku (Andrew Moodie) is still on pins and needles with Ryo.  Adrian (Mishka Thébaud) and Solara (Ayisha Issa) say their goodbyes to the Raza crew.  Sarah (Natalie Brown) is slowly creating her own world within the ship’s network.  When the crew decide to visit Six, they find dead bodies at the colony where he was staying.

The thought of Two and Three stealing Ryo’s transports was clever. Because of the rift between Ryo and the Raza, Two making a move now was a possibility unfortunately.  I was surprised that Two was moving forward with her vendetta so soon. When Two and Three spaced the prisoners I felt it was pretty out of character.  It was confirmed when Boone got lovey dovey with Portia and the rest of AU folk sans Corso arrived on the ship. My prediction last year was way off!

Another point of interest is we see the start of discontent with the current emperor of Zairon.  If anything, it proves that Ryo is treading on thin ice with his citizens if he keeps following the path of ruthless ruler.  Teku also needs to tread carefully or he will lose his head.

Melissa O’Neil shines as both Portia and Two.  I liked how O’Neil had Portia act like Two just enough to fool folk like Truffault.  Ryo should count but he doesn’t because he was being emotional when he confronted her.  Because of the rift between Ryo and the Raza, Two stealing his ship is now a possibility unfortunately.  If things were good, Ryo would’ve known something was up and given Two the heads up.  I had to laugh though when Portia hung up on Ryo.  Serves him right. Make him squirm!

Although Wexler is a more conniving Adrian, I have enjoyed his time on the show.  I always thought the character Tash was jealous of Portia so when the opportunity presented itself to get rid of her, she almost did. Oh well.

The alliance between Truffault and the Raza was put in jeopardy this episode.  Thank goodness it was fixed! The plausibility of doppelgangers from the AU sabotaging Truffault was more believable because of that knowledge.  It was good that Two and Three told her about the AU when trying to save Eos-7. I have enjoyed the budding mentor relationship between Truffault and Two so did not want it ruined by Portia.

I was surprised that the crew of the Raza decided to leave Portia, Boone, and Wexler alive.  My guess is because of AU Android.  She had no qualms about killing Tash when the woman decided to have the missiles target the Raza, even though Portia and Boone were on board.  Also since AU Android is like season 1 Android, it would feel weird to deactivate her.

Speaking of Android, several of her time jumps are in motion.  Here are the ones I believe are happening:

It was awesome to see Android meet with AU Android to confirm terms of the exchange.  You see the personality changes that Android has made since having the chip in her.  Kudos to not only Zoie Palmer for portraying those subtle changes but O’Neil and Lemke as well with their double roles.

One good thing came from Ryo stealing the blink drive.  This made the Raza crew more prepared to face their AU selves. Changing Android’s shut down code was smart since that was the first thing Portia tried to do when she got on the ship.  What was also cool was having Boone act as Three to blindside Android.

That fight scene between Android and Portia, golden! It was like seeing a fight I didn’t realize I wanted to see.  For once I wanted Android to have a win when it came to people trying to invade the Raza while she manned it.  At least this was a partial win.  Android and Portia fighting at least still leaves the friendship between Two and Android intact.  That would’ve been disappointing if their relationship took a downturn like that.

Five became the secret weapon again by using the ship to incapacitate Boone.  So far this season, Five has done something in every episode that has made me smile.  She continues to become an integral part of the Raza.

Adrian and Solara leaving so soon surprised me.  I figured they would stay longer on the ship.  Adrian made me proud as he was useful for once!  I loved that Adrian fooled the AU crew.  The confidence he showed towards AU Portia was good.  I wanted to clap for him.  He was adorable wishing his AU self was a concert pianist.

Surprisingly I will miss Adrian and Solara.  At least the writers left it open for us to see them again. Was it just me or was there a little sexual tension when Adrian said goodbye to Five?  It was still cute in an innocent way but there was an undercurrent of something. After that scene, I asked myself how old Adrian was considering Five is still a teenager. You got a few more years on that buddy.   For this episode Adrian moved up to 50% of my fave meter.  Now I have to wait longer for him to bump up again. I will miss Solara even more.  We just learned something deep about her and now she leaves? She has to keep Adrian alive so I guess.

Okay, what the hell happened to Six? We do not need another death right now.  Curses on General Neiman! A part of me can’t stand him and the other part of me loves his crafty meanness.  From the trailer it looks like Six may be possessed by something.  Could that be Agent Zero? Is that the alien that hooked its tentacles in Three last season? We will have to find out!

What did you think of the episode? Any predictions you want to make for the rest of the season? Sound off below in the comments!