2 Weeks ago Johns released the 80-page DC Universe: Rebirth (reviewed here). It has been a resounding success (3rd printings are already in production) and last week introduced the first 4 Rebirth titles. Each of which you will find reviewed here on The Nerd Element.

Green Arrow: Rebirth 1 is the last installment of reviews needed in order to catch us up with DC’s Rebirth initiative.  It happens to be the best of the 4 Rebirth titles released last week. The Green Arrow property is one of the most neglected and damaged casualties of the New 52. 7 different writers were hired and fired from Green Arrow over the 4½ years of the New 52 relaunch. it’s incredibly rewarding to see Oliver Queen getting some Love. 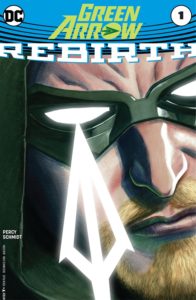 This 1st issue hits the ground running and covers a lot of territory in its allotted page count. There are no hints of decompressed storytelling. Instead, writer Benjamin Percy and artist Otto Schmidt waste no time in covering a lot of ground. Oliver Queen has been subjugated too long; it’s time for his book to empower him, allowing our hero to refocus on the elusive target; sustained readership.

In just the first page, we learn that Queen is critical of conservatives, affluent, and is based in Seattle, Washington. He also takes the first of several jabs at his personal appearance. The full beard doesn’t impress anyone. Maybe this is a commentary against the Hipster movement, a dominant cultural artifact of the Pacific Northwest? It doesn’t really matter because after a certain woman appears in his life, the beard disappears.

Leaving a very unsuccessful date (with the daughter of a Republican politician), Queen walks past a young homeless boy and his mother. The boy asks ‘please’ and our hero passes him a one hundred dollar bill. Queen is already on his way as the boy loses his grasp on the money and the wind takes it towards a drain in the gutter. Mom goes after it and finds herself grasped by something within the gutter. Screaming, she is pulled down into the Emerald City’s maw. 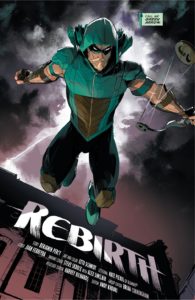 Patrolling the rooftops, Oliver Queen has transitioned over from being CEO of Queen Industries. He’s now in his true element, fighting crime and protecting the innocent. Green Arrow is back and it’s like receiving a visit from an old friend you haven’t seen in a long while. Much of the context for the Rebirth Green Arrow is predicated upon the Green Arrow we know from the days of Mike Grell. Later Kevin Smith and Brad Metzler also contributed to the continuity of Seattle’s favorite liberal marksman.

In full disclosure, I read only 2 issues of Green Arrow during the New 52. This includes the debut issue and issue 7, the introduction of new series writer Ann Nocenti. After that, I just watched the carnage from the sidelines. Green Arrow is certainly not the only hero to suffer during the New 52 but he had also received a few body blows prior to Flashpoint. Don’t get me started on what happened to his former ward, Speedy during ‘Cry For Justice.’ It’s one of the worst story arcs in the history of the Green Arrow family. That’s saying a lot considering Green Arrow has been in publication for 75 years.

Having said that, I don’t know how different the costume design is. It’s not what I remember, but it looks good and seems very functional for his method of vigilantism. Hearing a cry for his mother, Green Arrow engages in pursuit of a shrouded figure, leading a struggling boy through the back alleys of Seattle. It’s the same boy that Queen bequeathed the $100.00 to and now he’s screaming for his mother.

Green Arrow engages the cloaked figure (this is clever if you’re a Green Arrow nerd like myself) and it turns out to Black Canary! 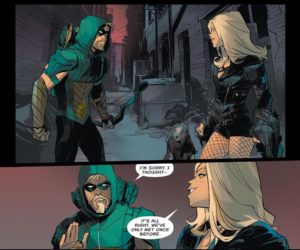 She heard the boy crying for his mother and came to his rescue after he’d injured himself while trying to descend into the gutter to find his mother. When Queen and Black Canary face one another, artist Otto Schmidt does a fabulous job of infusing the scene with poignancy. Before the New 52, the two heroes had been partners and eventually husband and wife. There’s an immediate connection and whether or not the parties knows the significance of this meeting, the reader sees it with startling clarity.

Green Arrow invites her up to his loft where he cleans up the boy and tends to his wounds.

Black Canary has heard a lot about Green Arrow and now that she knows his identity (It’s Oliver Queen’s loft, after all), she begins to challenge him on the hypocrisy of his liberal guise. He talks about oppression and helping the disenfranchised but he lives in opulence.

Green Arrow updates Black Canary on the truth regarding his loyalties. He uses his corporation to fund projects that help those who need it most. He gets annoyed but does not get upset with her. Rather than engage in loud arguments, he maintains the trajectory of their main agenda; locating the boy’s mother. Oliver Queen demonstrates his character and liberal values through actions. In the past, Queen has engaged in political arguments and it tends to get loud and his position is lessened by his overbearing and unflinching moral outrage. Here we get moments of outrage during moments of appropriate intensity but otherwise, he offers a balanced defense for his actions and diffuses any misperceptions of hypocrisy.

Black Canary is privy to information about Seattle that Queen doesn’t know. There’s a large forested area called ‘The Jungle’ where camps of homeless people find refuge. The forest theme within Green Arrow’s city was introduced a few years before New 52 and is a concept with promise. I’m glad to see that it has survived the Rebirth.

It’s from here that Green Arrow offers insight into the strata of Seattle and it’s history. Below ground is the infrastructure of the Seattle that existed before massive fires in the late 1800s virtually destroyed the city. New Seattle was built over the old and the city was Reborn. Seattle was given a second chance and Queen shares that he feels the same. He posits that the same can be said for Black Canary. She’s inclined to accept these terms.

Arrow and Canary disrupt the auction, subdue more Underground Men and face the off against the televised visage of the Auctioneer. Green Arrow promises that these missing homeless people absolutely matter and this auctioning will be brought to an end. A well-placed arrow to the monitor, ending all transmissions, punctuates the moment. 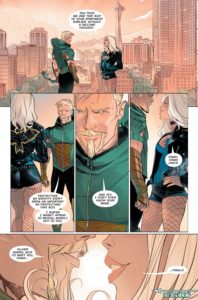 The final is drenched in sunshine. Green Arrow is standing with Black Canary on the balcony of his loft. We get a subtle glimpse of the makings of a new relationship. He’s let his guard down and she was wrong about his motives and disposition. They’re poised to kiss and the issue ends with poignant dialogue.

She reveals her true name and the sparks start to fly.

Goosebumps, I tell you! Goosebumps!

Percy and Schmidt deliver the personification of Rebirth’s potential. Green Arrow and Black Canary are back together and we get to see their love story unfold. Oliver Queen is back in Seattle and his main villain is involved in human trafficking, specifically exploiting the homeless population. We’ll need to be patient and see how many other supporting characters from the Green Arrow universe will appear.

But for a first issue, we’re given more than I could have hoped for.

Green Arrow: Rebirth 1 earns an A

Oscar Opportunity: Why There Are So Many Last-Minute Entries in the 2018 Awards Race