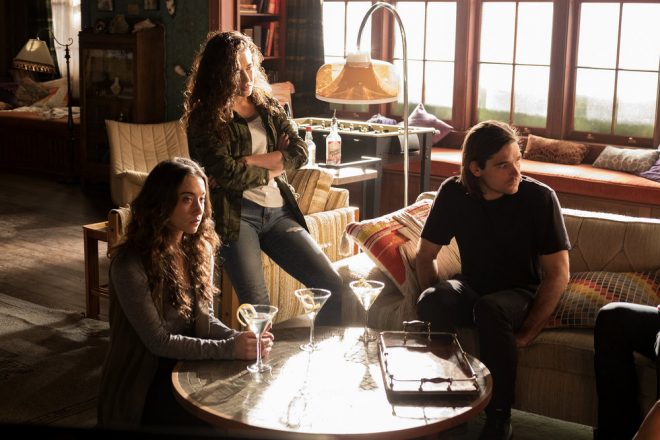 So how do magicians rob a bank? We find out in this week’s episode of The Magicians!

Let’s start with why everyone needs some gold:

Julia (Stella Maeve) and Kady (Jade Tailor) go to the place that was recommended by the friend of Kady’s mom.  The two owners, who are Mudang, argue over the best approach.  For their trouble the ladies are demanding a million in gold.  Kady suggests robbing a bank.  Soon after casing a bank an invisible goblin attacks. The Hexenpaxen sacrifices himself to save Julia.  She needs a haven now that the hexenpaxen is dead. So, they turn to my man Dean Fogg (Rick Worthy), who for some reason is more sympathetic towards Julia than he was to Marina but okay.  He lets Julia stay in the Physical Kids cottage.

Niffin Alice (Olivia Taylor Dudley) is haunting Quentin (Jason Ralph).  She wants to be free from his tatoo but he hasn’t said the words to free her and it’s frustrating.  He is trying to come up with another avenue of freeing her without having to trap her in a niffin box.  He asks for patience but Alice isn’t having it.  She gets miffed when Julia unloads her things in Alice’s old room.  Quentin and Julia finally make up with Q wanting to help Julia with her situation.  When she mentions robbing a bank, niffin Alice wants in!  At least that will hold her interest for a while.

Fillory is broke.  Margo (Summer Bishil) jumped the gun declaring war on a country without checking if there are enough funds to cover it and cleansing the wellspring at the same time.  They go to Brakebills for some solutions.  Eliot’s (Hale Appleman) golem goes with Margo.  Quentin brings up robbing a bank when he sees them.  The High King and Queen are proud that Q would even suggest it.  They are in!

Kady does some research in the Brakebills Library and runs into Penny (Arjun Gupta).  He greets her by staring at her then kissing, which eventually turns into a quickie.  In the afterglow Penny winds up offering to help with the mission despite working with Julia.  He’s always wanted to rob a bank!

The players assembled, Margo (who not surprisingly has done this before) gives a breakdown of the different obstacles they face and potential issues.  One issue includes anti-transporter magic that Eliot solves by creating a device for Penny to levitate.  Another potential issue is running into a battle magician, which Margo suggests strongly to run away from if seen.  They have to get fingerprints from two of the managers so Q volunteers himself while Margo volunteers Kady.  While having their pow-wow Julia is attacked again so Kady manages to get the spoon. She figures out one of the Mudang sent someone to kill Julia instead of waiting for payment.

This moved the timetable up and Julia could no longer go with them.  She still contributes by creating a time device that rewinds for 15 seconds only four times. This came in handy because things did go wrong.  Initially things went well.  They clear out the bank using bees.  Quentin and Kady use the fingerprints so they have access to the safe.  Penny, using the levitating device starts adding gold to his bag.  Only, his foot touches the floor, first alarm tripped.  Two guards didn’t leave with everyone else so Eliot gave them a disco ball spell to lock them in a room.  Penny almost suffocates.  Alice takes advantage of Penny’s situation by asking Q to let her use his body for a limited amount of time. Q agrees so she can figure out the right combination to open to the safe door, saving Penny.  Soon after Quentin tripped the alarm for the lady battle magician.

Julia had to go there after all to use her device and gets attacked by another goblin.  It gave Eliot, Penny, Kady, and Quentin four times to make it pass the lady battle magician.  On the last rewind, Eliot sacrifices the Golem to save Q (causing him to seize in Fillory) while Kady punches out the lady.  Kady then whips it good with the battle magician’s weapon to defeat the goblin choking Julia.  Julia is taken to the Mudang, where they remove the fetus.  However, something has gone wrong.  Cue the end credits and preview!

This was my favorite episode so far this season! The main reason being that everyone’s (Alice counts even though Quentin only sees her) story arc merged together briefly so the Brakebills crew could be together again with the addition of Julia.  I enjoyed the special effects in this episode with the bees and even the whip the battle magician, and later Kady used.  I didn’t even mind the invisible goblin even though similar effects were used for the cacodemon.  Even the episode title was another clever use of words this week because of the bees featured.

Kudos to Will Bates for the music on this episode, especially during the heist because it was on point.  Eliot’s choice of music for his disco ball spell was genius!   The battle magician was a tough cookie!  As much as it pained me to see my favorites in danger, I liked her moves!  I approved of her weapon, considering Kady gave it a whirl not long after.

This episode was not perfect.  There were a few things that bothered me.  I love the character Kady. I’m hoping that it was just a two-episode thing because her punching people and using the same attack spell was redundant even though it was cool as it happened.  We have seen her do other magic but I’m hoping to see even more of her abilities.  Also, I’m glad that she defended Julia to Penny.  She is the only one in her corner in this situation.  Julia saved all them by making a deal with The Beast in the first place.  If she had not left with him when she did, they would all be dead because that first assault went horrible.  Alice choose to become a niffin, Julia did not force her to do that.

The moment I’ve been waiting for arrived yay! The reunion between Penny and Kady went better than I expected.  I was thinking Penny would be pissed but nope.  Maybe that will be brought up later.  Or maybe he realizes that he wasn’t the reason she left.  Even though their relationship started off as casual sex, I think Penny became vulnerable with her so was very disappointed when she left abruptly like that.  Penny has already started being slightly mellow.  He’s smiling more that’s for sure.

This season so far has hinted at Julia’s soul, shade, and essence changing for one reason or another.  The first when the Beast (Charles Mesure) offered to remove her shade.  The second was with this pregnancy and the repeated warnings in the last few episodes about how the baby has ties to her soul the longer she is pregnant.  For some reason, I just thought the line delivery of the professor indicating Julia was screwed was so eloquent.

Now at the end of the episode it is hinted Julia has lost her soul aborting the baby.  This is a major Easter Egg for the book readers because of the direction her story takes because of this. I’m glad the writers explored this aspect of her story when they could have followed the books exactly.  I was confused initially on why Dean Fogg would mention having history with Julia but all I could think of is that Julia was supposed to be at Brakebills but because of what happened with the Beast (Charles Mesure) Fogg didn’t allow her to get educated at the school but instead become a hedge witch.  Because that led her into her current situation, he probably feels responsible for it.

Niffin Alice haunting Q is another clever way to keep the character relevant that wasn’t available in the novels.  This also gives Dudley an opportunity to show a different side.  Alice seems to have more personality now that she gives no effs being a niffin.  Quentin is going to regret taking that deal if what was seen in the preview comes to pass.

What the show does well is continue to introduce different aspects of the magician world.  From different lands like Fillory, how to rob a bank magician style, to even the Mudang and how they would handle sensitive situations.  That’s what makes this show great!

What did you think of the episode.  What were your favorite moments? Comment below!

Dark Matter Ep 305 Recap/Review : Give it Up, Princess